Skeleton believed to be US or French soldier found in DMZ, S. Korea says 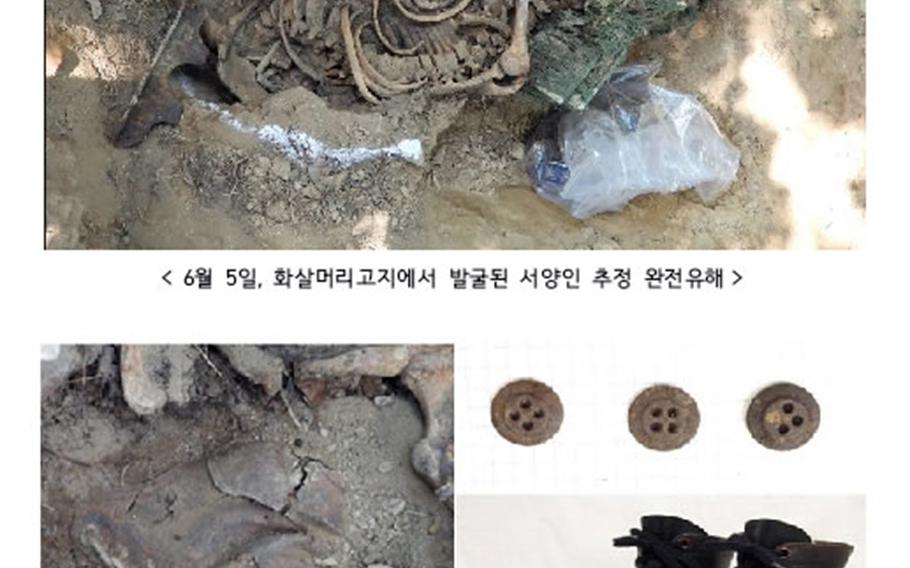 Top: Remains that may be from an American soldier are excavated from Arrowhead Hill, South Korea, June 5, 2019. Bottom: Buttons from a U.S. soldier's uniform and combat boots. (South Korean Ministry of National Defense)

Top: Remains that may be from an American soldier are excavated from Arrowhead Hill, South Korea, June 5, 2019. Bottom: Buttons from a U.S. soldier's uniform and combat boots. (South Korean Ministry of National Defense) 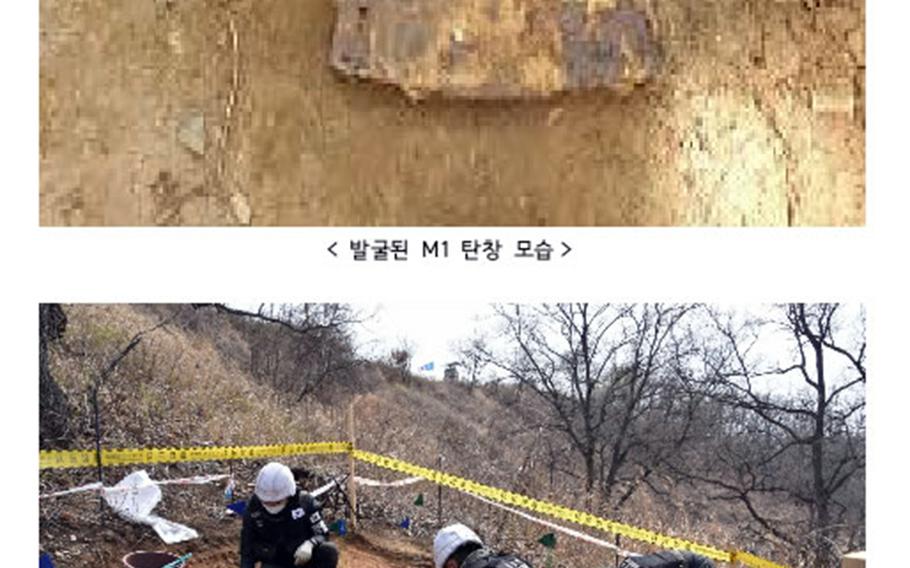 SEOUL, South Korea — South Korean search crews working in the heavily fortified border area found a skeleton believed to be from an American or French soldier killed during the 1950-53 Korean War, the defense ministry said Monday.

The remains were unearthed Wednesday during an excavation project at the former battleground known as Arrowhead Hill, which is in the Demilitarized Zone that has divided the country since the war ended in an armistice instead of a peace treaty.

The area was cleared of land mines in the fall as part of an inter-Korean agreement reached in efforts to improve relations between the two countries in connection with separate nuclear negotiations between Pyongyang and Washington.

Talks on all fronts have stalled, but South Korea unilaterally resumed the search for remains in the DMZ on April 1, finding some 425 bone fragments and nearly 30,000 artifacts.

Those include the largely intact skeleton, which was believed to be the first from a Western soldier found in the area, based on an initial analysis, according to the defense ministry.

“The remains are believed to be from an American or French soldier who served in the Korean War as a member of the U.N. force,” the ministry said in a statement. It cited the shape of the skull and items found with the bones, including combat boots and buttons from an American uniform.

As is usual practice, the remains will be taken to the laboratory of the defense ministry’s agency for killed in action recovery and identification, known as MAKRI, in Seoul for further identification.

The ministry said it would work closely with the U.S. Defense POW/MIA Accounting Agency, or DPAA, to use DNA and other methods to identify the soldier as soon as possible.

South Korean Defense Minister Jeong Kyeong-doo also planned to visit the site with U.S. and French officials to hold a memorial service for the soldier.

The defense ministry said more than 100 U.N. troops were killed in action and about 20 are believed to remain entombed in the area, which was a no-go zone for decades. The numbers are difficult to confirm.

More than 7,600 American troops remain missing from the war, with 5,300 believed lost in the North, according to the DPAA. More than 133,000 South Koreans are still unaccounted for, officials have said.