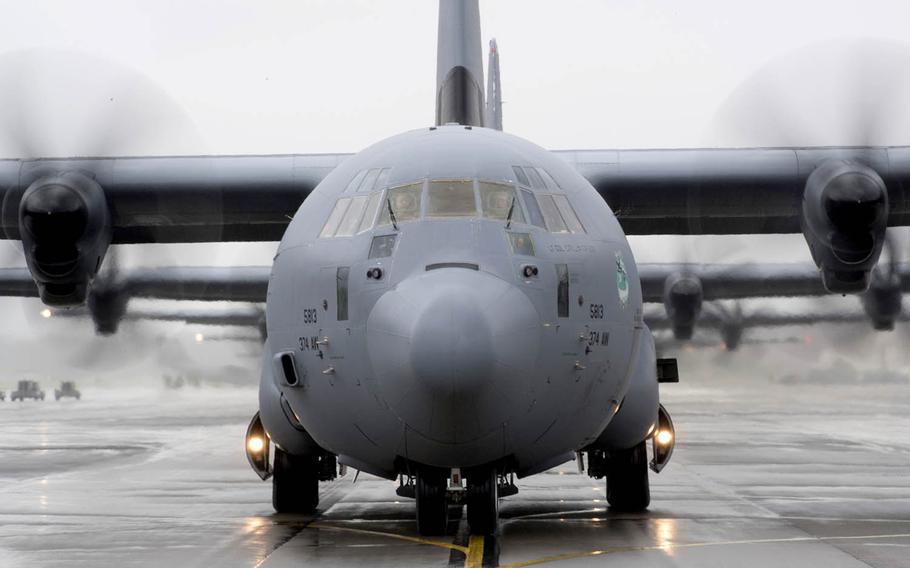 A C-130J Super Hercules assigned to the 36th Airlift Squadron taxis during the elephant walk portion of the Samurai Surge exercise at Yokota Air Base, Japan, May 21, 2020. (Taylor Workman/U.S. Air Force)

A C-130J Super Hercules assigned to the 36th Airlift Squadron taxis during the elephant walk portion of the Samurai Surge exercise at Yokota Air Base, Japan, May 21, 2020. (Taylor Workman/U.S. Air Force) “We’ve been executing every mission we’ve been tasked to do, not without regard for COVID, but despite COVID,” Col. Andrew Campbell told Stars and Stripes in an interview. COVID-19 is the respiratory disease caused by the coronavirus.

“We’ve continued to move safely and with such care that we haven’t had significant COVID transmission caused by the missions that we’ve been executing,” Campbell said.

Yokota, with a community of just under 12,000 airmen, civilian workers and family members, has reported at least 86 coronavirus cases since May, not counting an undisclosed number of Navy personnel who sequestered on base before shipping out with the Ronald Reagan Carrier Strike Group.

In November, a small outbreak fueled by more than 30 instances of spreading by close contact contributed to a monthly total of 62 people infected with the virus, the most the base has reported in any month during the pandemic.

Campbell said oft-repeated health protection measures such as social distancing, contact tracing, masks for those in close contact, restriction of movement for people coming into Japan and testing have helped the Air Force contain the virus.

“The public health protection measures we have in place have been very effective in enabling us to sustain our mission,” he said. “People have done a really good job of complying with the protective measures out of a sense of community.”

The wing doesn’t have data on the number of Yokota personnel who have been ordered abroad this year, although Campbell said his airmen are constantly going on missions.

“We are a mobility wing,” he said. “We constantly have people executing the mobility mission.”

This year Yokota airmen have, for example, flown to Alaska to train, ferried soldiers to Palau and conducted refueling operations on Guam and Okinawa.

“There is no debate that COVID has impacted every aspect of everything we do but the successes we have had despite this challenge are remarkable,” he said.

The U.S. military’s mobility forces operate continuously and globally even during a pandemic, Campbell said.

“We have continued to execute our mission despite COVID,” he said. “It’s a positive reflection on our resilience and perseverance.”

Campbell said there have been tactical highlights, such as a Nov. 24 mission that involved one of the wing’s C-130Js doing a hot-pit refuel of a pair of F-22 Raptor stealth fighters at Koror Palau International Airport.

The aircraft had an aerial bulk fuel delivery system designed to transport fuel rapidly to spots close to or behind enemy lines. One of the wing’s aircraft refueled Raptors the same way at Andersen Air Force Base, Guam, in September, according to an Air Force news release Nov. 24.

“We did a similar operation between a C-130J and an F-15 on Okinawa recently,” Campbell said.

Over the summer, Yokota personnel deployed to the Aleutian Islands of Alaska. Ahead of the mission, airmen rehabilitated a 1970s-era tactical air navigation system using parts bought at Joyful Honda, a local hardware store. They used the gear to guide aircraft transiting between Alaska and Japan, he said.

It’s unclear where Yokota airmen might travel on missions next year, Campbell said.

People will be watching how the global community moves over the next couple of months, “ … hopefully out from this dark cloud of COVID,” he said. “Everyone is hopeful the vaccine will enable us to return to full normality.”