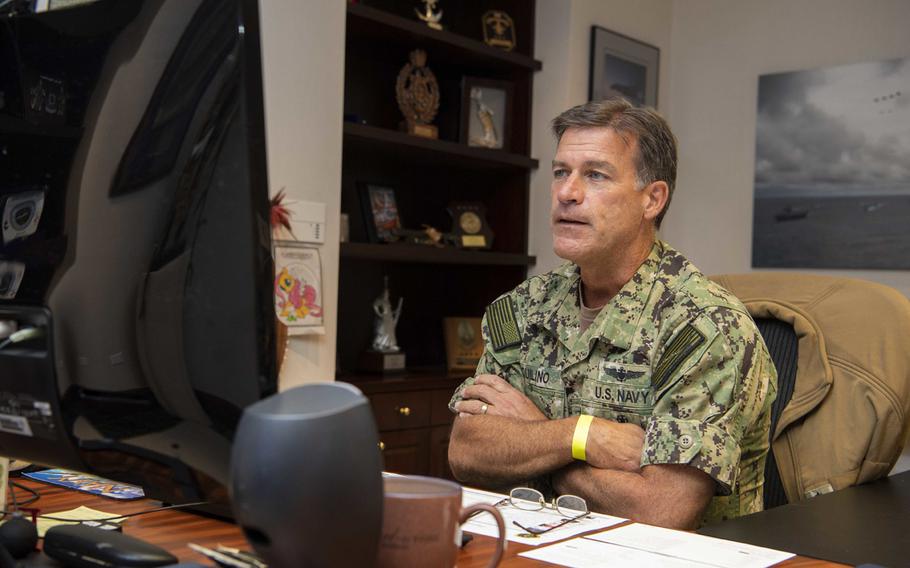 Adm. John Aquilino, U.S. Pacific Fleet commander, speaks with 13 other leaders of navies or their representatives from allied and partner nations throughout the Indo-Pacific region on Sept. 24, 2020, at Joint Base Pearl Harbor-Hickam, Hawaii during a virtual key leader engagement to discuss outlooks and perspectives during the coronavirus pandemic. (MC2 Kenneth Rodriguez Santiago/Commander, U.S. Pacific Fleet)

WASHINGTON — Adm. John Aquilino was confirmed by the Senate on Wednesday to be the next commander of Indo-Pacific Command, making him the top military officer in the strategically important region.

The Indo-Pacific Command covers 36 nations in a region that the Defense Department deemed its “priority theater” and “the single-most consequential region for America’s future” in a June 2019 Indo-Pacific strategy report issued amid simmering tensions with China.

“[China] seeks to reorder the region to its advantage by leveraging military modernization, influence operations, and predatory economics to coerce other nations,” then acting Defense Secretary Patrick Shanahan wrote in the report. “We will not accept policies or actions that threaten or undermine the rules-based international order.”

During Aquilino’s confirmation hearing, he agreed the United States needed to bolster its funding for the region, including for the Pacific Deterrence Initiative, in order to challenge Chinese influence and increase cooperation with allies and partners.

The Pacific Deterrence Initiative is designed to enhance budget oversight and funnel resources to key military capabilities to deter China. Congress funded $2.2 billion for the PDI in fiscal year 2021, which ends Sept. 30. Aquilino supported additional funding for the initiative for 2022.

Aquilino also warned during the hearing that China’s nuclear stockpile is “increasing at a rate that is faster than anyone previously believed,” but he downplayed the concern over the number of warheads that the Chinese possess. The Defense Department has estimated the Chinese stockpile is “in the low-200s” compared to the U.S. inventory of nuclear warheads at 5,800.

Sen. Jim Inhofe of Oklahoma, the ranking Republican on the Senate Armed Services Committee, tweeted Wednesday that he was glad the Senate confirmed Aquilino to lead INDOPACOM.

“He is the right leader to defend against China and implement our National Defense Strategy. I am grateful for his service,” he wrote.