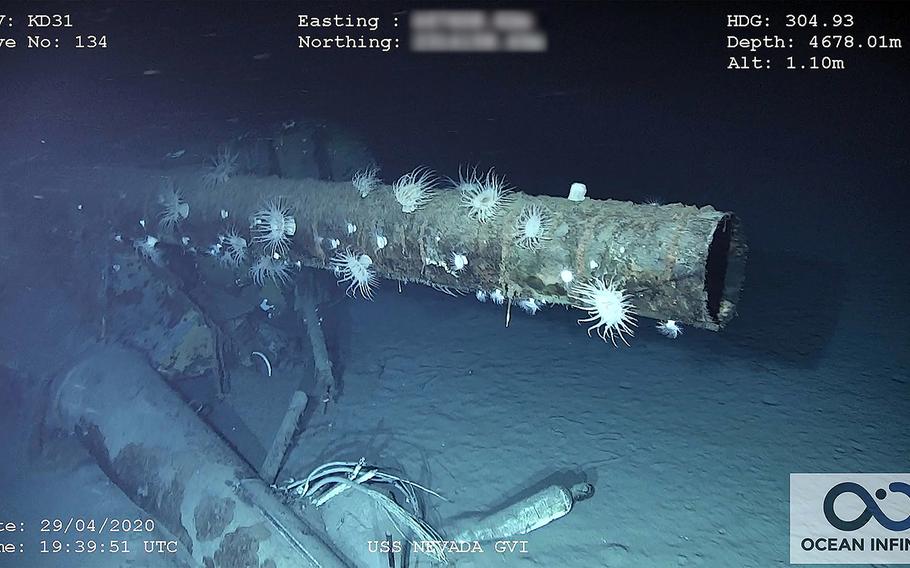 Top of the USS Nevada's foremast, which would have towered more than 100 feet above the sunken battleship's deck. (Ocean Infinity/Search Inc.)

Top of the USS Nevada's foremast, which would have towered more than 100 feet above the sunken battleship's deck. (Ocean Infinity/Search Inc.) 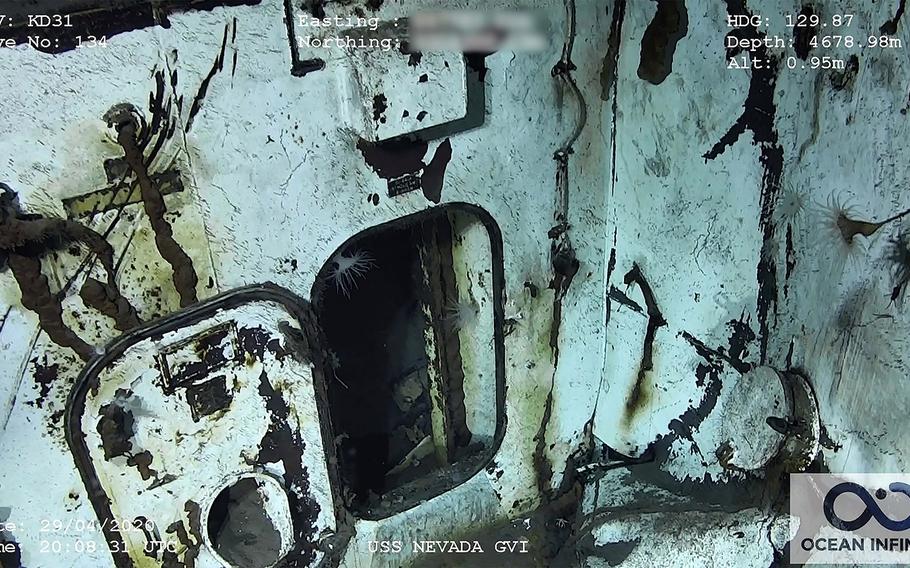 A hatch leading into a shell-handling compartment for one of the USS Nevada's 5-inch guns. (Ocean Infinity/Search Inc.) 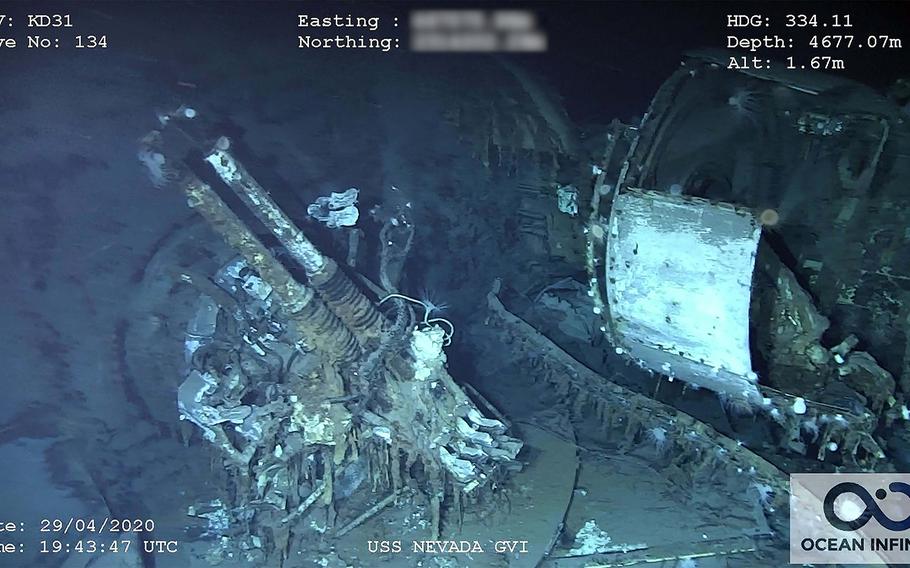 A 40-mm anti-aircraft gun on the sunken wreck of the USS Nevada, which was discovered by searchers recently near Hawaii. (Ocean Infinity/Search Inc.) 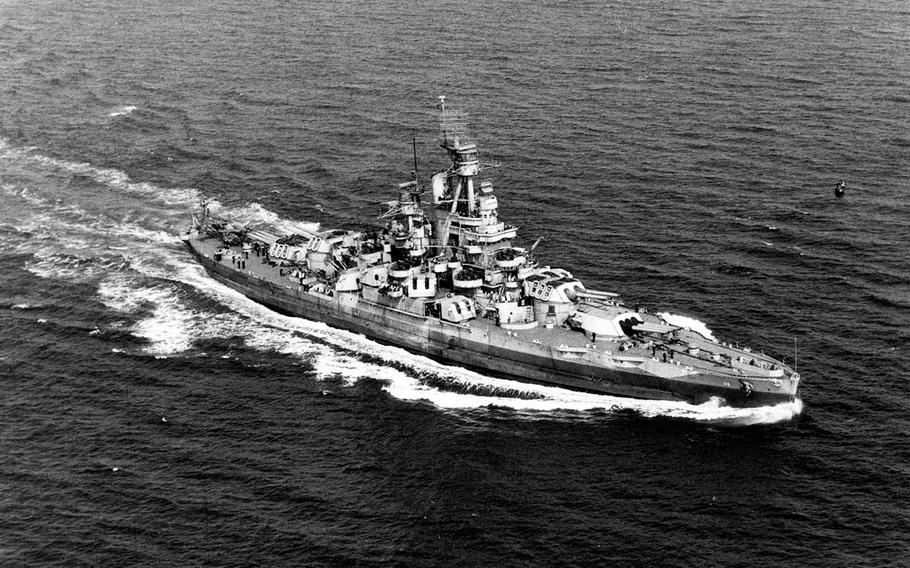 The sunken hulk of the USS Nevada has been found off the coast of Hawaii, where the battleship — dubbed “unsinkable” for its endurance through World War II — lay since 1948.

Two private firms working together, Search Inc. and Ocean Infinity, discovered the Nevada almost three miles underwater and about 65 nautical miles southwest of Honolulu, the firms said in a statement Monday. Search Inc., a cultural resource management firm, specializes in archaeology; Ocean Infinity surveys the seabed with marine robotics, according to their websites.

The Nevada’s lifespan was exceptional, given the troubled waters in which it sailed. It stayed afloat through two world wars and two nuclear-bomb tests.

“Nevada is an iconic ship that speaks to American resilience and stubbornness,” James Delgado, the lead maritime archaeologist on the mission, said in the statement. “Rising from its watery grave after being sunk at Pearl Harbor, it survived torpedoes, bombs, shells and two atomic blasts. The physical reality of the ship, resting in the darkness of the great museum of the sea, reminds us not only of past events, but of those who took up the challenge of defending the United States in two global wars.”

Photos and video of the excursion show portions of the ship, such as an anti-aircraft gun and hatch for a 5-inch gun room, still intact. Portions of the hull number are visible, as are inscriptions in the steel, all preserved because of the lack of light and oxygen at the extreme depth.

The Nevada was commissioned in 1916 and headed to Great Britain during World War I, according to an account posted online by the Naval History and Heritage Command.

It spent the interwar years cruising everywhere from the Caribbean to Australia. In the late 1920s, the ship was modernized, including installation of new anti-aircraft guns and other beefed-up firepower.

After operating in the Pacific for most of the 1930s, the Nevada was moored at Pearl Harbor, Hawaii, when the Japanese Imperial Navy launched a surprise attack on the Pacific Fleet on Oahu on the morning of Dec. 7, 1941.

The attacking aircraft concentrated on Battleship Row in Pearl Harbor, sinking or crippling most of the ships, which had been moored closely together.

The Nevada took one torpedo and several bomb hits during the first of two attack waves. Moored at the end of Battleship Row, the Nevada took advantage of the lull after the first wave to get underway. But it had not made it to sea before the second wave of aircraft descended on the harbor, striking the ship with a half-dozen bombs.

The crew was forced to beach the sinking ship at the head of the channel.

After frenzied temporary repairs, the Nevada sailed on its own power to the U.S. West Coast in April 1942, where it spent the next year being repaired and overhauled.

It returned to combat during the Battle of Attu in the Aleutian Island in May 1943 and was then transferred to the Atlantic for the D-Day invasion in June 1944. It sailed back to the Pacific and became part of the Iwo Jima and Okinawa invasions in 1945. In the latter battle, the ship was hit by a kamikaze plane and an artillery shell.

It was preparing to be part of the invasion force on the Japanese mainland when the war ended in September 1945.

With the end of World War II, the Navy deemed the three-decade old battleship too ancient for the fleet.

Its final job was to serve as a target during two atomic bomb tests at Bikini in the Marshall Islands in 1946 – though even that dirty work left the ship only badly damaged and radioactive, not sunk.

The ship was decommissioned in August 1946, and two years later it was towed to sea off the Hawaiian islands and used for target practice for other Navy ships. Even that four-day pummeling didn’t sink the battle-scarred ship. It was finally scuttled by an aerial torpedo.

Although the Navy was aware of the vicinity of the ship’s sinking, its exact resting spot was unknown until now.

The search for the USS Nevada was conducted aboard Ocean Infinity’s Pacific Constructor vessel, which had set sail for a range of tasks in early 2020, well before the coronavirus had morphed into a pandemic.

“As a result of the global health crisis, the ship has remained at sea on a range of taskings,” Ocean Infinity said in the statement.