Search for Korean War missing picks up again in the DMZ 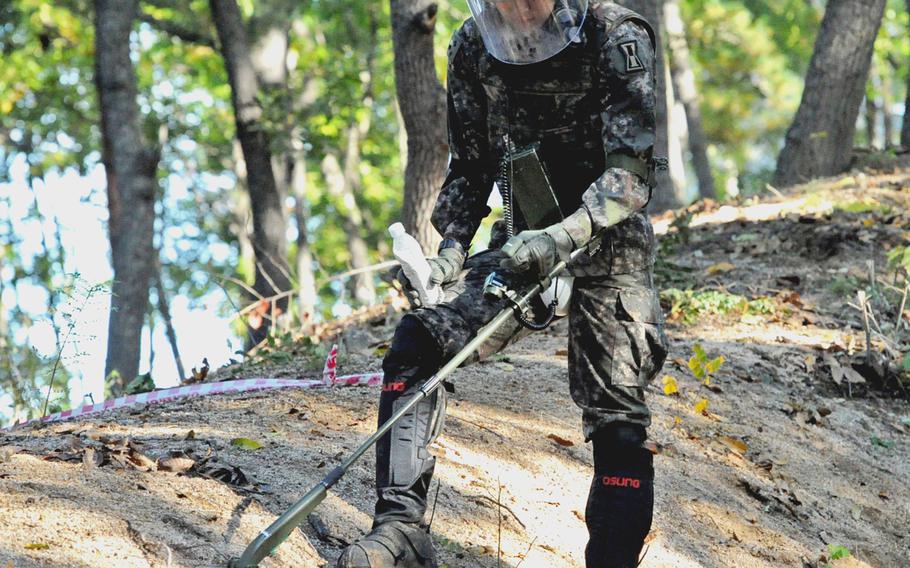 A South Korean soldier works a metal detector at Arrowhead Hill in the Demilitarized Zone in a hunt for leftover mines of the Korean War on Oct. 8, 2018. (Benjamin Parsons/U.S. Army)

OSAN AIR BASE, South Korea – Recovery teams from the United Nations Command and South Korea will start the search again Monday along the Demilitarized Zone for lost soldiers of the Korean War.

This marks the third consecutive year that teams will search for missing soldiers and leftover ordnance in an area that saw hard fighting during the three-year conflict 70 years ago.

The recovery project is a collaboration between the U.N. Command and the Ministry of National Defense, according to a U.N. news release Thursday.

The Cheorwon region, 57 miles northeast of Seoul, is the site of battlefields at White Horse Hill, or Baekma, and Arrowhead Hill, where tens of thousands died.

Soldiers of South Korea, multinational U.N. forces, the Korean People’s Army and the Chinese People’s Volunteer Army all fought in the area, the statement said.

Following the armistice in 1953, Cheorwon, crossed by the DMZ, was divided between the two Koreas.

Since 2018, demining and recovery efforts in the area have yielded more than 9,125 mines and unexploded ordnance and more than 2,335 bone fragments and skeletal remains, according to the U.N.

The Defense Ministry notified North Korea of continued recovery efforts, according to a Defense Ministry statement Thursday. The work will resume on Arrowhead Hill and expand east to White Horse Hill with preparations for demining and road construction, the ministry said.

U.S. forces are not involved in the project, U.S. Forces Korea spokeswoman Hochong Song said. She said the U.S. supports the mission with assistance in mission planning, site surveys and identifying and repatriating remains. South Korea’s 5th Infantry Division will take the lead with support from the Special Maneuver Support Brigade and the Agency for KIA Recovery & Identification, the ministry said.

For the second year in a row, an Australian team will facilitate access for the recovery teams into the area and ensure the search complies with the 1953 armistice.