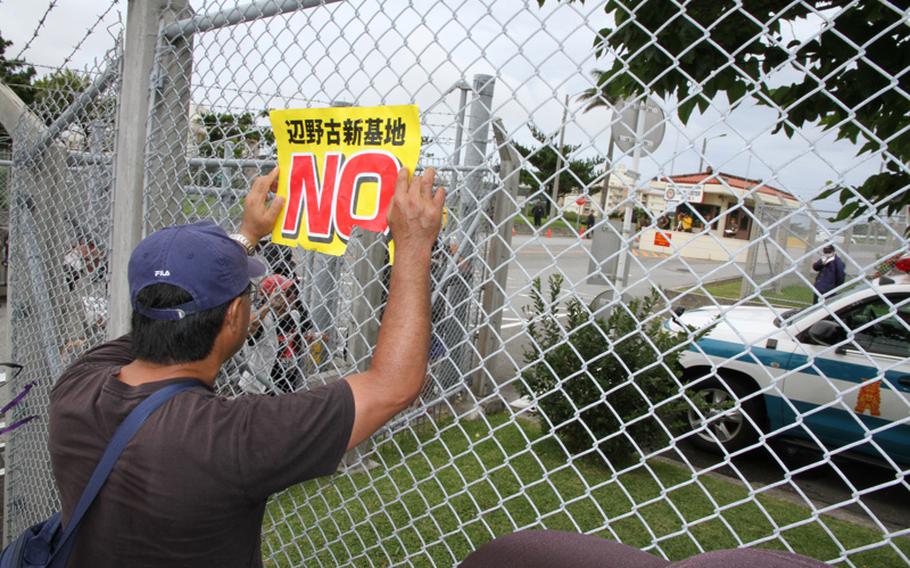 In this May 25, 2016, file photo, protesters rally in front of the gate at Marine Corps headquarters on Camp Foster on Sunday to protest the U.S. military presence in Okinawa after a former U.S. Marine who worked as a civilian on Kadena Air Base confessed to the brutal slaying of a 20-year-old local woman last month. (Matthew M. Burke/Stars and Stripes )

CAMP FOSTER, Okinawa — A 21-year-old Navy sailor was arrested on suspicion of drunk driving after crashing into two cars while driving the wrong way on an Okinawa highway, police said Sunday.

The incident appeared likely to further inflame anti-U.S. military sentiment on Okinawa that has been exacerbated by the recent arrests of a civilian U.S. base worker in connection with the slaying of an Okinawa woman and a U.S. sailor for the rape of a Japanese tourist. Those separate incidents led to tightened liberty restrictions May 27 on Okinawa, including a ban on off-base drinking.

“All acts of misconduct are unacceptable,” the statement quoted Dolan as saying. “U.S. military members are expected to maintain the highest standards at all time as representatives of their unit and our nation.”

Aimee Mejia, a Navy petty officer second class assigned to the Navy Munitions Command at Kadena Air Base, was traveling southbound in the northbound lane of Highway 58, a main artery on Okinawa’s west coast, at about 11:40 p.m. Saturday near Kadena Gate 4, police said.

Her car crashed into an oncoming vehicle, injuring a 35-year-old woman in the chest. Mejia’s car then struck another car, bruising the arm of a 30-year-old man, police said.

USFJ said the Navy is cooperating the Japanese police investigation. Dolan expressed regret for the incident and sympathy for the victims.

“We wish them a fast recovery,” he said.

Cmdr. Ron Flanders, spokesman for Naval Forces Japan, called the incident “deeply upsetting,” particularly because it happened during a month-long period of mourning — declared by the top U.S. military official in Okinawa — for Rina Shimabukuro, whose body was found in a wooded area after being missing for several weeks.

Former Marine Kenneth Franklin Gadson, 32, a civilian contractor at Kadena, was arrested in connection with Shimabukuro’s death. Gadson, who goes by the name of his Japanese wife, Shinzato, remains in Japanese custody in accordance with the status of forces agreement.

“We are constantly evaluating our policies to ensure they’re effective,” Flanders said. “Navy leadership is currently talking about ways that we can address negative trends, not just in Okinawa, but for all sailors in Japan.”

“We recognize we still have work to do and are committed in our prevention efforts. Our leaders will continue to emphasize safety, respect, honor, and personal responsibility. Our efforts will continue to focus on stopping irresponsible behavior, incidents and crimes by U.S. military members. We will take swift corrective actions when violations occur," he said.

The liberty restrictions, which also moved up a 1 a.m. curfew to midnight, took effect the same day that that 24-year-old Seaman Apprentice Justin Castellanos, a corpsman assigned to Camp Schwab, pleaded guilty to raping an intoxicated Japanese woman at a Naha hotel.

The two incidents have triggered anti-base protests on Okinawa — a major demonstration is slated for June 19 — and cast a pall over President Barack Obama’s trip to Japan at the end of May.

In line with the period of mourning, several festivals, celebrations and concerts on U.S. facilities have been postponed, including next weekend’s Futenma Flightline Fair.

A Japan-wide curfew for U.S. servicemembers has been in effect since late 2012 following the rape of an Okinawa woman by two visiting Navy sailors. The curfew was eased somewhat in 2014.

The U.S. military presence on Okinawa has long irritated some residents, who want to see the troop presence reduced. More than half of the U.S. servicemembers in Japan are based on Okinawa, and there are long-delayed plans to shift some of them to Guam.