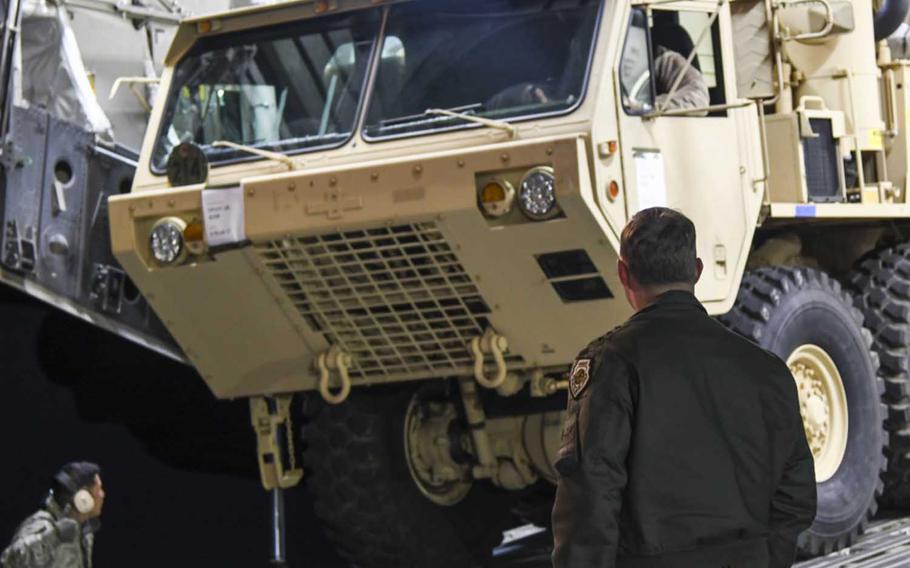 The allegation came a day after Moon ordered an investigation into the issue, saying it was “very shocking” that the launchers had been brought in without being reported to his administration, which took office on May 10 after a snap election.

It was the latest complication in efforts by the U.S. and South Korean militaries to get the Terminal High Altitude Area Defense system, known as THAAD, operational to counter a growing threat from North Korea.

Underscoring the concern, the Pentagon said it had staged a successful missile defense test involving a simulated attack by an intercontinental ballistic missile on Tuesday.

Moon hasn’t directly opposed THAAD but as a candidate argued that the decision to deploy it should be reviewed and subject to legislative approval.

He also called for the deployment to be suspended after U.S. Forces Korea began installing equipment in an overnight operation that many saw as an effort to rush it into place before elections to replace ousted President Park Geun-hye could be held.

At the time only two of its maximum load of six launchers were placed on the former golf course that has been designated as its new home.

The president’s office said Wednesday that a draft report mentioned six launchers being kept at a camp, but the references were deleted in the process of reading and making comments.

It was the first action Moon has taken on THAAD since becoming president. His preference for a moderate approach toward the North has been tested as Pyongyang has conducted three missile tests since he took office.

“As a result of the investigation … the Blue House confirmed the Ministry of National Defense deliberately omitted the fact from its report,” spokesman Yoon Young-chan told reporters.

He said several military officials, including the defense ministry’s policy chief, had been summoned and had “admitted” to the omission of all phrases including “six launchers” and the name of the base where they were being kept.

The revelation was made after the security officials on the new president’s transition team became suspicious and began questioning points made during briefings by the defense ministry, which is still run by Park appointee Han Min-koo.

The U.S. Defense Department insisted Tuesday that it has been “very transparent” about THAAD’s deployment.

After learning of the fact, Moon called Han, who “finally confirmed the fact that the four additional THAAD launchers had been brought to South Korea,” in the phone conversation on Tuesday, according to the spokesman.

The defense ministry declined to comment on the allegations.

Moon has expressed shock and said the deployment “has profound implications” because it was conducted without the public’s knowledge and as a summit with President Donald Trump is imminent, Yoon said. Trump has suggested that Seoul should pay for THAAD.

Seoul and Washington agreed last year to station a THAAD system on the divided peninsula when Park was still in power after the North conducted its fourth nuclear test and launched a satellite into space, setting off the current crisis.

Many South Koreans oppose the anti-missile battery, believing it may make them a target and that is only useful for protecting U.S. forces in the southern half of the country. Military officials counter that THAAD is part of a layered defense system that would protect the entire country.

China also fears the system could be used against its own military and has been accused of staging a campaign of economic retaliation against the South because of it, although ties have been warming under Moon’s administration.