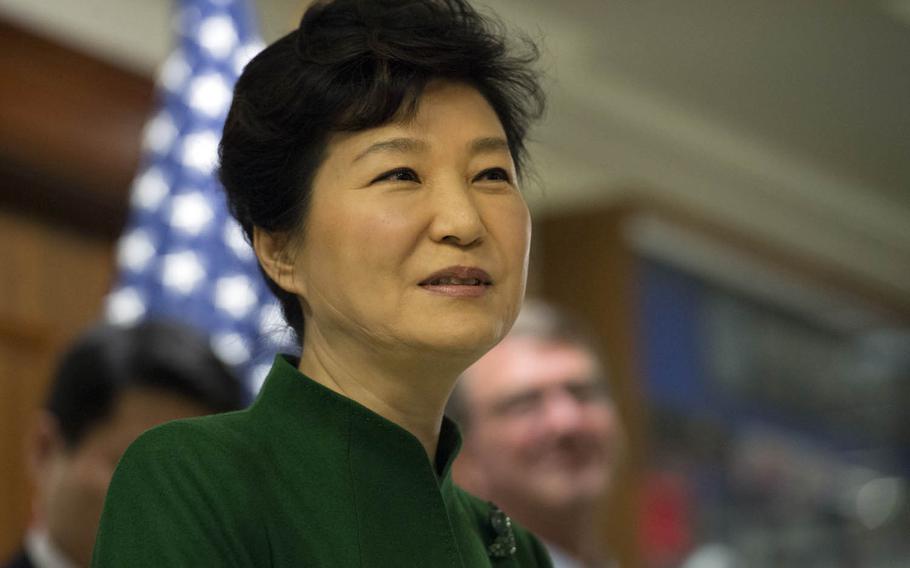 South Korean President Park Geun-hye speaks last year during a visit to the Pentagon. The embattled leader says she will resign if parliament comes up with a plan for the safe transfer of power. (Adrian Cadiz/U.S. Defense Department photo)

SEOUL, South Korea — President Park Geun-hye offered Tuesday to resign if parliament can work out the details, but the opposition rejected her surprise announcement as a “trick” aimed at avoiding impeachment over an influence-peddling and corruption scandal.

The five-minute statement, which was broadcast live, was her third nationwide address since accusations surfaced last month that she allowed longtime friend Choi Soon-sil to wield undue influence over government policies and allegedly commit fraud.

Park has acknowledged mishandling the situation and apologized twice, but that has failed to quell the public anger that has sent hundreds of thousands of protesters into the streets for five weekends in a row.

She would be the first leader to resign since 1960, when South Korea’s founding president, Syngman Rhee, was forced to flee to Hawaii during a popular uprising.

“I will leave the matters about my fate, including the shortening of my presidential term, to be decided by the National Assembly,” she said.

“If the ruling and opposition parties discuss and come up with a plan to reduce the confusion in state affairs and ensure a safe transfer of governments, I will resign from the presidential position under that schedule and by processes stated in law,” she added.

However, the vague wording only served to deepen the uncertainty that has paralyzed the government, leaving open questions about the timing and whether the parties in the opposition-dominated parliament can agree on the process.

The main opposition Democratic Party said the speech was a stalling tactic and vowed to press forward with the impeachment drive. A motion had been scheduled for a vote on Friday.

“The speech lacked self-reflection and repentance,” party spokesman Rep. Youn Kwan-suk was quoted as saying by the Yonhap news agency. “What people want is her immediate resignation, not dragging out and dodging the responsibility to the parliament.”

The Democratic Party and a smaller opposition group also said they will propose two former prosecutors as candidates to lead an independent investigation into the scandal. Park has three days to pick one of them according to a law passed earlier this month.

Park’s refusal so far to step down and the widening probe into Choi’s activities have prompted mass protests and caused her approval rating to drop to 4 percent, according to a weekly survey released Friday by Gallup Korea.

Park, who has 15 months left in her five-year term in office, again apologized for the disruption but denied she sought personal gain. Prosecutors have accused her of being a co-conspirator in the scandal. The constitution provides the president with immunity from prosecution except in cases of treason or insurrection, although she can be investigated.

Choi, the 60-year-old daughter of a late cult leader, has been formally indicted on charges related to suspicions that she used her presidential ties to persuade dozens of companies, including Samsung and Hyundai, to donate more than $65 million to two nonprofit foundations she controlled.

Park admitted again to carelessness in her ties with Choi, whom she has said helped her through difficult times. The president is the daughter of former dictator Park Chung-hee, who was assassinated in 1979, five years after her mother was killed in another attempt on his life.

“Not for one moment did I pursue my private gains, and I have so far lived without ever harboring the smallest selfish motive,” she said. But she acknowledged she had “failed to properly manage those around me.”

At least 200 members of the 300-strong National Assembly need to support an impeachment effort, which would likely require the support of 28 Saenuri Party members.

Some members of the ruling party had broken ranks and joined the calls for Park to resign, but statements by Saenuri Party lawmakers praising her speech suggested the process would be bruising.

Even if the vote is in favor of impeachment, the decision would have to be ratified by the Constitutional Court while power is temporarily handed to the prime minister. Elections would have to be held within 60 days if Park resigns.

The crisis comes at a dangerous time for South Korea as it faces a growing threat from North Korea, which has conducted two nuclear tests and several missile launches this year.

The U.N. Security Council was expected to impose tougher sanctions on Pyongyang in a vote Wednesday in New York, although previous rounds have failed to stop the communist country’s weapons programs. Diplomats have said the new sanctions target North Korea’s hard-currency revenues by placing a “hard, binding cap” on coal experts, The Associated Press reported.

The U.S. has about 28,500 servicemembers stationed in South Korea, which remains technically at war with the North after the 1950-53 Korea War ended in an armistice instead of a truce.