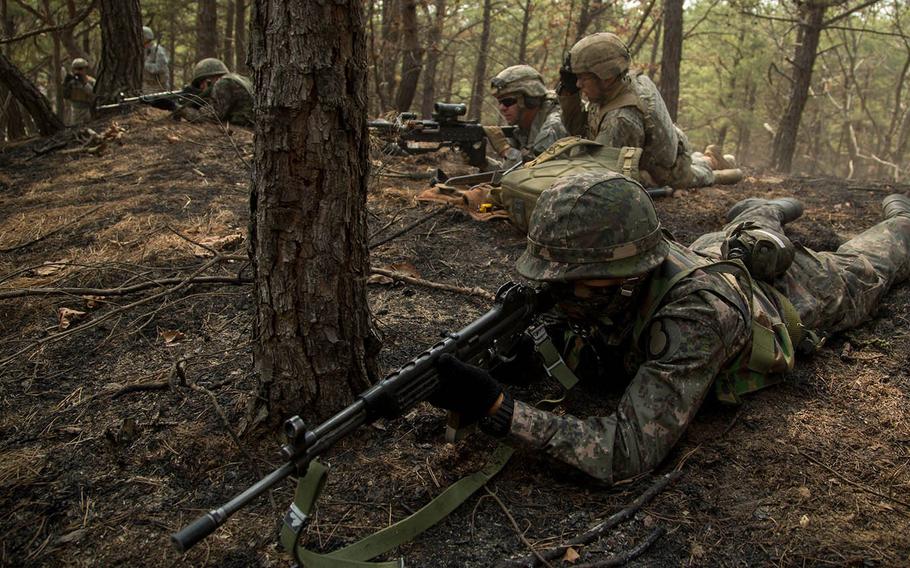 The U.S.and South Korea have reached an agreement on cost sharing for U.S. forces, like these of the 25th Infantry Division photographed on March 21, 2015. However, the agreement is only for one year rather than the usual five years. (Steven Hitchcock/U.S. Army)

SEOUL, South Korea — South Korea agreed to pay $920 million this year in a new defense cost-sharing deal with the United States that was signed Sunday, lifting a strain on the alliance just in time for the next U.S.-North Korean summit.

The United States, meanwhile, reaffirmed the need for a “stable U.S. military deployment” and offered assurances that it has no plans to change the number of forces on the divided peninsula, the Foreign Ministry said in a press release.

The provisional contract, known as the Special Measures Agreement, was inked nearly six weeks after the previous five-year accord expired.

That’s short of the $1.5 billion per year that Trump reportedly had at one point demanded. But the two sides also agreed to a one-year agreement instead of the usual five-year timeframe, so negotiators will have to return to the table soon.

The deal - which must still be ratified by South Korea’s National Assembly - resolves a dispute between the longtime allies at a crucial time, with a second U.S.-North Korea summit due to take place at the end of the month in Hanoi, Vietnam.

“We have a number of domestic steps that we need to go through,” Foreign Minister Kang Kyung-wha said as she met with the top U.S. negotiator Timothy Betts.

“I think the response so far has been quite positive. Of course, there are some points of criticism as well,” she added. “We will have to deal with them, but I think at this point we were able to close the gap on the total amount.”

South Korea has hosted American troops since the two countries fought together against the communist-backed North in the 1950-53 Korean War, which ended in an armistice instead of a peace treaty.

President Moon Jae-in also has been credited with playing a mediator role in persuading North Korean leader Kim Jong Un to engage in diplomacy aimed at ridding his country of nuclear weapons.

“The United States government realizes that Korea does a lot for our alliance and for peace and stability in this region,” Betts said. “The SMA is only a small part of that. But it's an important part and we are pleased that our consultations resulted in an agreement that I think will strengthen transparency and strengthen and deepen our cooperation in the alliance.”

Alliance testThe burden-sharing talks were a test for Trump’s insistence that U.S. allies should pay more for their own defense. He also has insisted that NATO members increase their contributions, and the issue is expected to arise soon in Japan in talks on funding the 50,000 U.S. troops based there.

Trump has complained that maintaining troops in South Korea is too expensive and said in the past that he would like to bring them home. But he insists that troop numbers are not part of the equation in nuclear talks with the North.

When asked about the possibility in an interview with CBS last week, Trump said he has “no plans” to withdraw troops from the peninsula and hasn’t even discussed the issue.

However, he added “maybe someday,” reiterating that he would like to save the money.

Brinkmanship is common in the cost-sharing talks, which have taken place since 1991, but the U.S.-led effort to persuade North Korea to give up its weapons raised the stakes.

Trump surprised Seoul and many of his own aides when he announced after his first summit with North Korea on June 12 that he was suspending joint war games with South Korea, which he called “very expensive” and “provocative.”

Many analysts expressed concern he may make a similar gesture in his upcoming talks with Kim.

The next round of annual joint military exercises, called Key Resolve/Foal Eagle, is due to be held in the spring, although officials have said they won’t announce a date until after the Vietnam summit.

North Korea hates the drills, which it considers a rehearsal for an invasion. The North and its main backer, China, also would like to see the U.S. military presence removed from their doorstep.

Military costsSouth Korea insists it pays a fair share of the some $2 billion per year needed to keep the troops in the country, with funds mainly used for salaries of nearly 9,000 local employees who provide food and administrative services, and other logistical needs.

U.S. Forces Korea, the main command, said in its Strategic Digest that Seoul paid about 41 percent of the cost.

The South also paid the bulk of the more than $11 billion price tag for expanding the Camp Humphreys Army garrison as part of a long-delayed plan to relocate most Americans south of Seoul.

The U.S. military also enjoys less tangible benefits, including rent-free land for its bases and an exemption that allows government-operated vehicles to use expressways toll-free.

Services had not been interrupted thanks to reserve funds, but USFK had warned the Korean Employees’ Union that it would have to put local staff on unpaid leave beginning in mid-April if a deal wasn’t reached.

The allies also missed the Dec. 31 deadline in 2013, but they managed to reach a deal a few weeks later when South Korea agreed to increase its contribution by 5.8 percent, with a 4-percent cap on the inflation rate.