Reports say Apache may have gotten tangled in utility wires 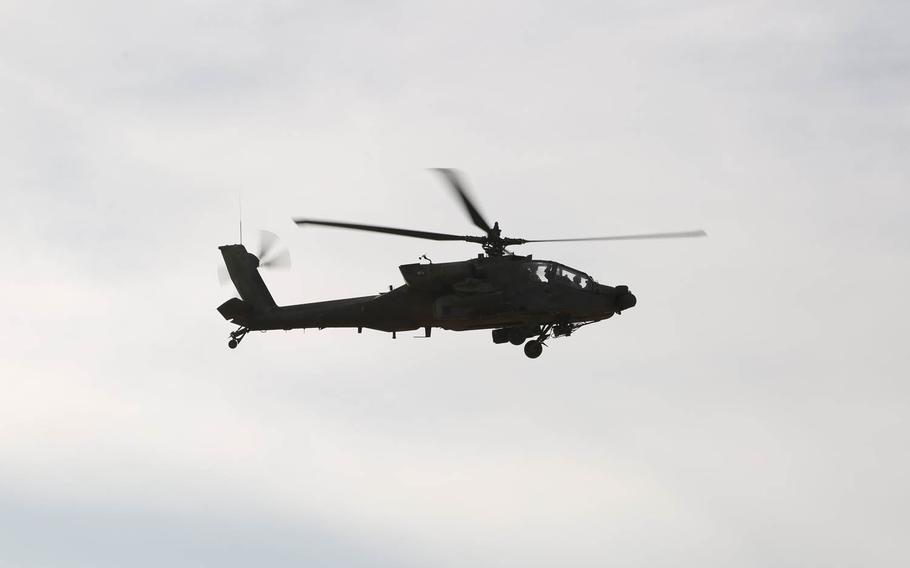 An AH-64 Apache helicopter flies over the National Training Center at Fort Irwin, Calif., Nov. 11, 2014. An Apache that crashed in South Korea Monday, Nov. 23, 2015, killing both pilots may have collided with a power pylon or high-tension wires, according to South Korea media. (Randis Monroe/U.S. Army)

An Army helicopter that crashed may have collided with a power pylon or high-tension wires, according to South Korea media.

Both pilots were killed when an AH-64 Apache attack helicopter with the 2nd Infantry Division went down about 6:30 p.m. Monday during a routine training mission, the division said in a statement.

The Apache was flying near Wonju, about 80 miles southeast of Seoul, when it appeared to hit a power pylon or high-tension wires attached to it, according to South Korea’s TV Chosun and several other media outlets. The upper part of the pylon was damaged, and high-voltage wires were brought down at the crash site, the reports said.

There were no reports of ground casualties at the crash site, about 50 miles east of Camp Humphreys, The Associated Press reported.

The pilots’ identities are being withheld pending next-of-kin notification.

“We offer our heartfelt prayers and condolences to the families of the soldiers involved in this tragic incident,” Lt. Col. Mark Gillespie, deputy commander of the 2nd Combat Aviation Brigade, said in the statement. “Our first priority is to provide their families with the support they need during this difficult time.”

Crash investigators from Fort Rucker, Ala., will likely take a month or more to determine the cause of the incident, said Lt. Col. Richard Hyde, 2nd ID spokesman.

Earlier this month, the South Korean government approved the purchase of 36 Apache AH-64E helicopters worth more than $1.56 billion between 2016 and 2018. The purchase is part of an effort to offset North Korean multiple rocket launchers and hovercraft that threaten the South’s northwestern-most islands, according to the Chosun Ilbo newspaper.