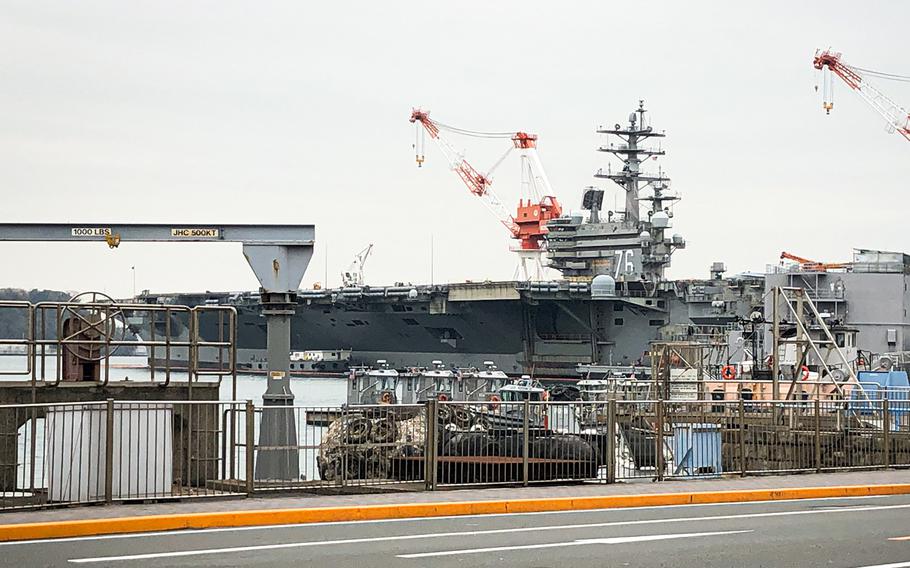 It was unclear Monday whether those cases, which were reported by Fox News on Saturday citing unnamed U.S. officials, are among three Yokosuka sailors confirmed positive Thursday and Friday.

When asked Thursday whether the first sailor to test positive was assigned to the Ronald Reagan, U.S. Forces Japan officials declined to comment.

The Navy — which previously identified some installations and ships that experienced coronavirus cases — pivoted on Friday to revealing servicewide case numbers only. The change follows a policy “not to disclose specific operational or readiness details of units,” according to emails Friday from Lt. Cmdr. David Levy of Naval Forces Japan and Lt. j.g. Rachel McMarr of Pacific Fleet.

The Navy will no longer provide details that include “specific positive cases, numbers of Sailors in quarantine, or how many Sailors have been tested onboard specific installations,” Levy wrote.

Instead, the Navy is totaling up the numbers of sailors, dependents and contractors testing positive worldwide and publishing them daily on its website. As of Sunday, the service reported 134 sailors, 31 civilians, 23 dependents and 12 contractors had tested positive.

Despite the policy, Yokosuka officials announced two of its three positive cases on Friday evening, though they declined to name the ships or units to which the patients are assigned.

The Yokosuka base entered a third day of lockdown Monday to mitigate spread of the virus following the three positive test results announced last week. Base commander Capt. Rich Jarrett instructed non-essential personnel to stay home and instructed residents to shelter in place “until further notice.”

One of those cases originated in the United States, where that sailor is believed to have contracted the virus before returning to Japan on March 15. The sailor then started the 14 days of restricted movement required for all service members returning from overseas during the pandemic, but developed symptoms around day 10, USFJ officials told Stars and Stripes on Thursday.

At Yokosuka, some sailors underwent that observation period in their homes. But for those who live aboard the Ronald Reagan, those 14 days were served in “a designated observation berthing” on the carrier, according to a March 14 internal notice obtained by Stars and Stripes.

“Medical personnel will conduct daily medical screenings in person for personnel executing their observation period on board the Reagan,” Capt. Pat Hannifin, the carrier’s commander, wrote in the notice.

The goal was to “preserve our personnel readiness,” according to the notice.

“Our focus remains putting to sea on time, with no degradations to warfighting readiness or redundancy,” Hannifin wrote. “Your health and personnel readiness is a crucial component to Reagan’s ability to sail any waters and meet any challenge at sea.”

Navy officials did not immediately respond Monday to questions about whether the Ronald Reagan is still restricting sailors undergoing observation to ship-board quarters.

“Each service member will stay at home or other appropriate domicile coordinated with the parent command,” 7th Fleet spokesman Lt. Joe Keiley told Stars and Stripes in an email March 17. “On-base facilities are made available to sailors that live aboard ships or in unaccompanied housing on base.”