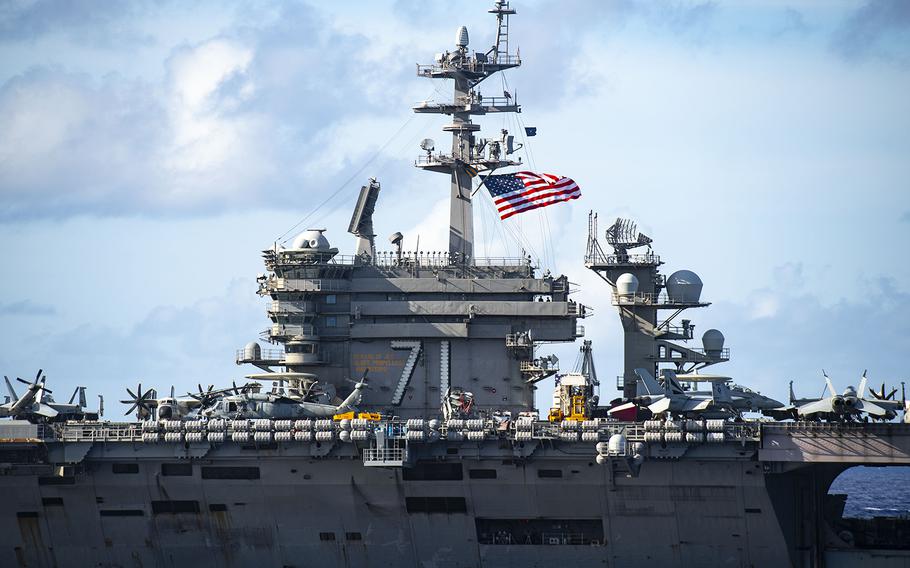 The aircraft carrier USS Theodore Roosevelt is seen from the USS Nimitz during dual-carrier training in the Philippine Sea, June 23, 2020. (Dalton Reidhead/U.S. Navy)

The aircraft carrier USS Theodore Roosevelt is seen from the USS Nimitz during dual-carrier training in the Philippine Sea, June 23, 2020. (Dalton Reidhead/U.S. Navy) 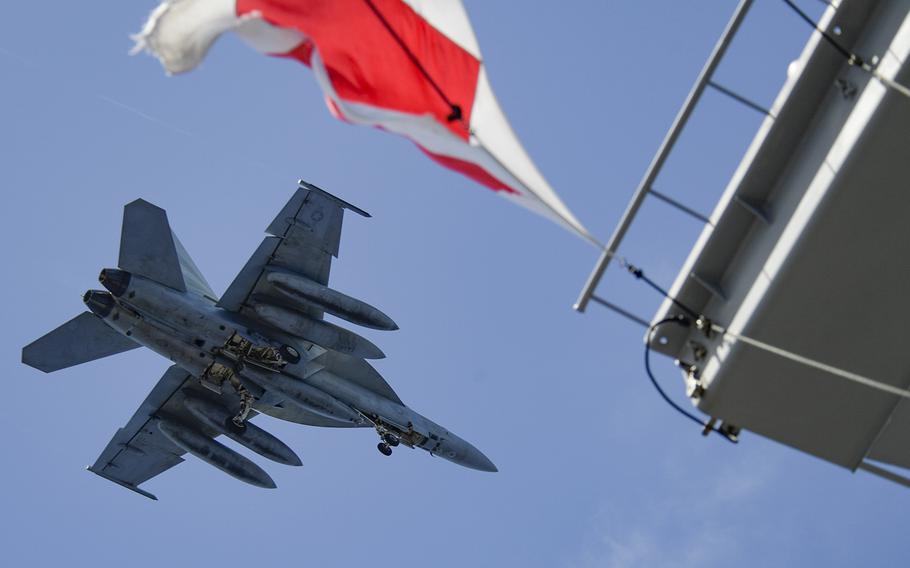 A deeper dive into the coronavirus outbreak aboard the aircraft carrier USS Theodore Roosevelt in March found missteps by senior commanders exacerbated conditions on the warship, according to a monthlong investigation by the Navy.

Crozier was at the helm when the Roosevelt diverted to Guam on March 26 after several sailors tested positive for the coronavirus. He was later removed from command after a letter he emailed his Navy superiors pleading for help surfaced in the San Francisco Chronicle soon after. The ship remained in Guam two more months as sailors were isolated, tested and treated.

Ultimately, more than 1,150 Roosevelt sailors tested positive, one of whom died.

Adm. Robert Burke, until June 8 the vice chief of naval operations, conducted the investigation, whose results were released June 20.

Outbreak begins On March 8, as the Roosevelt wrapped up a port visit to Da Nang, Vietnam, the U.S. Embassy there informed the Roosevelt and its strike group that 39 sailors had been to a hotel where two guests had tested positive for the virus. The carrier left Da Nang the next day.

However, common areas and activities such as gyms, the ship store, library and chapel services remained open despite concerns of coronavirus exposure, the report said. In the galleys, self-service buffets were discontinued, but salad bars were allowed.

Social distancing measures were not enforced, the investigation found.

“Specifically, no seats were removed, lines continued to form without six feet of separation between sailors and condiments were available for common use,” the report said.

Even when the Navy issued guidance March 12 that required six feet between individuals when possible and discouraged mass gatherings, “social distancing was not observed on the way to Guam,” the carrier’s next port visit, scheduled for April 3, according to the report.

The first coronavirus cases appeared aboard the Roosevelt on March 24. Three sailors tested positive: two from the carrier’s air wing and one from the nuclear reactor department. The ship put on steam and reached Guam on March 27, earlier than planned.

‘Scattered’ goals Meanwhile, Navy leaders from Modly down to Rear Adm. Stuart Baker, who was aboard the carrier as commander of the Roosevelt Strike Group, became increasingly involved in response plans, according to the report.

On March 25, Baker asked the 7th Fleet for 4,000 rooms to isolate sailors for two weeks, it said.

That “was not an option,” Baker was told, because Modly publicly stated none of the crew would be allowed to leave the pier, according to the report.

By the time the ship reached Guam, 33 sailors had tested positive and “the goal became scattered,” the report said. Pacific Fleet prioritized testing all sailors, 7th Fleet wanted sailors to disembark and Crozier wanted single rooms for each crewmember.

One day after the ship’s arrival, 46 sailors had become infected, and Crozier believed quarantining sailors aboard the ship “was only making the problem worse,” the report said. Meanwhile, there was “true human suffering” in the carrier’s cramped aft berthing as more sailors required quarantine.

But when cots were made available in warehouses and storerooms ashore, Crozier turned them down because they “were not single occupancy,” and thousands of sailors remained on board, according to the report.

Gilday on June 19 told reporters that Crozier’s “determination that onboard quarantine was ineffective should have led to an acceleration of sailors to ashore accommodations. It did not.”

Instead, Crozier on March 30 emailed his letter to Pacific Fleet, Naval Air Forces Pacific and the strike group. Crozier described the letter as a “red flare,” but did not intend for it to be given to the press, the report said.

Crozier “stated that his intent in sending the letter was to stop the administrative bureaucracy and bring focus back to what he thought was the best course of action to get people off the ship,” the report said.

Ultimately, Pacific Fleet, 7th Fleet and the strike group said the letter “did not increase support” for the ship. Pacific Fleet said that was “because we had already been examining all options to get sailors off the ship safely,” according to the report.

The San Francisco Chronicle published the letter on April 1, and Modly relieved Crozier from command the following day for “loss of confidence.”

Modly ultimately resigned following backlash from sailors, the public and Congress for his decision, along with a recording of Modly calling Crozier “stupid” during a speech April 6 aboard the Roosevelt.