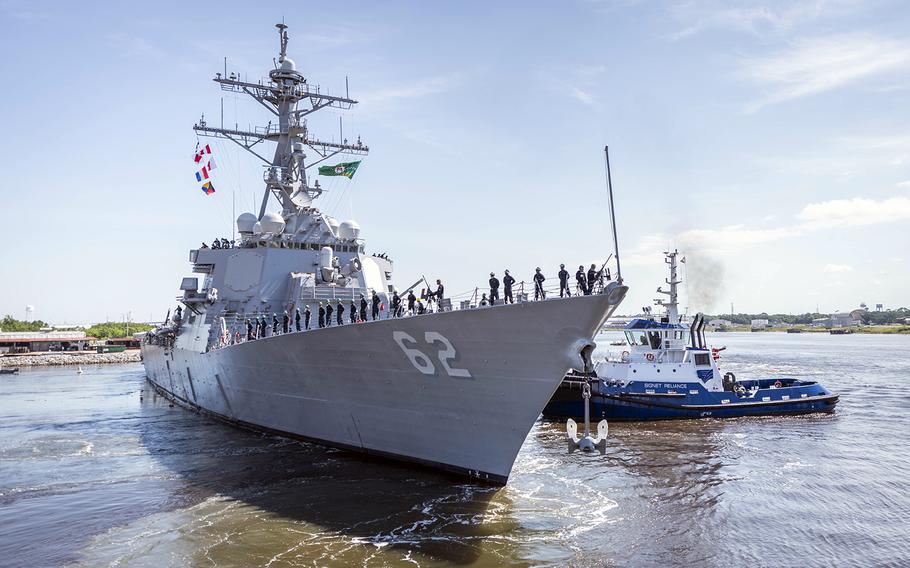 The guided-missile destroyer USS Fitzgerald prepares to depart a shipyard in Pascagoula, Miss., to head for its new homeport in San Diego, Saturday, June 13, 2020. (U.S. Navy)

The guided-missile destroyer USS Fitzgerald prepares to depart a shipyard in Pascagoula, Miss., to head for its new homeport in San Diego, Saturday, June 13, 2020. (U.S. Navy) 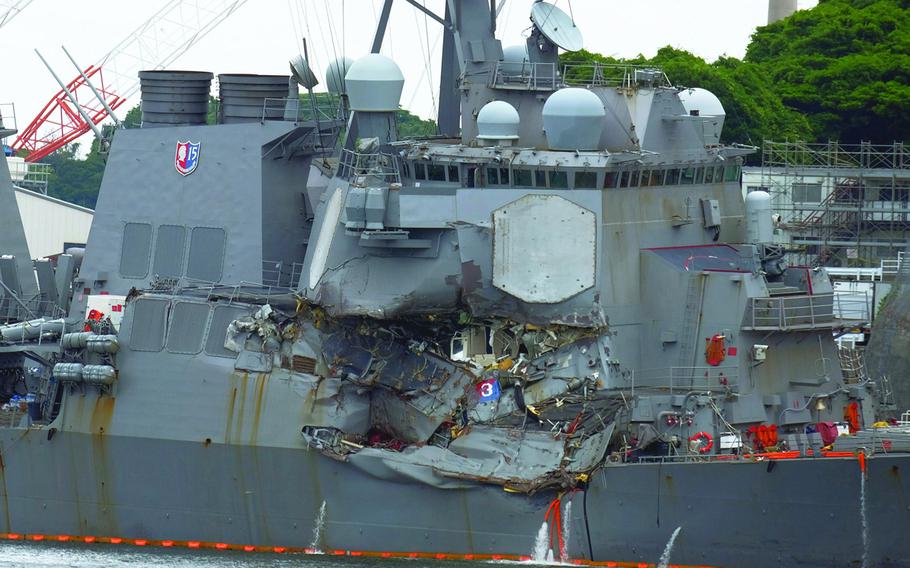 The USS Fitzgerald is on its way to San Diego, where it will rejoin the Pacific Fleet after spending more than two years undergoing extensive collision repairs and equipment upgrades in Mississippi.

Seven sailors were killed when the guided-missile destroyer collided with a commercial container vessel, the Philippine-flagged ACX Crystal, off Japan’s coast on June 17, 2017.

On Saturday, the warship departed the Ingalls Shipbuilding facility in Pascagoula, Miss., for its new homeport at Naval Base San Diego, a Navy statement said. It had been assigned to the 7th Fleet at Yokosuka Naval Base, Japan, at the time of the accident.

“Today the ‘Fighting Fitz’ is returning to the Pacific Fleet as one of our nation’s most capable warfighting platforms, marking a significant step in her return to warfighting readiness,” Rear Adm. Eric Ver Hage, the Navy’s surface ship maintenance and modernization commander, said in the statement.

The repairs and modernizations ended up costing the Navy $523 million, USNI News reported Saturday. The work was originally expected to top out at $368 million and take two years instead of two and a half.

In February, the Fitzgerald went to sea for a trial run and to evaluate its navigation, damage control, combat and propulsion systems. Once in San Diego, it will begin crew training and certifications required for it to officially restart patrols.

Blame for the collision fell on the commanding officer at the time, Cmdr. Bryce Benson, and Lt. Natalie Combs, a tactical action officer, who were initially charged with negligent dereliction of duty resulting in death and negligent hazarding of a vessel. The charges were dropped last year and the two were instead censured by the Navy. Benson retired in December; a Navy panel in January ruled Combs could do the same.

Two months after the Fitzgerald incident, the guided-missile destroyer USS John S. McCain, also based at Yokosuka, collided near Singapore with a commercial tanker, the Alnic MC, killing 10 sailors. The McCain underwent extensive repairs and is back in service.

A Navy report in late 2017 cited crew exhaustion, skipped certifications, poor watch-standing and training and manning problems among the causes of the collision, which the report concluded was preventable.

The Fitzgerald returns to sea about a week after a federal judge dismissed two lawsuits brought by survivors and sailors’ families seeking more than $287 million from the ship company that chartered the ACX Crystal.

U.S. District Judge Lance Africk in New Orleans granted NYK Line’s motion to dismiss, saying U.S. courts have no jurisdiction over the cases. The company “cannot be deemed ‘at home’ in every country in which it operates,” according to the ruling. NYK Line maintains less than 6 percent of its employees and generates less than 10% of its revenue in the U.S., Africk wrote.

The plaintiffs’ attorney, David Schloss, plans to appeal the decision.

“It simply cannot be the case that the United States has no interest in providing a forum for the seven families who lost their loved ones and the more than 40 Fitzgerald sailors who suffer debilitating physical and psychological injuries, all in the name of serving their country,” he told Stars and Stripes in an email on June 5.