Buy Photo
Marine Corps pallbearers transfer the remains of servicemembers from a C-17 cargo jet to a hangar at Joint Base Pearl Harbor-Hickam, Hawaii, Wednesday, July 17, 2019. The identified remains are Marines or sailors killed during the Battle of Tarawa in 1943. (Wyatt Olson/Stars and Stripes)

Buy Photo
Marine Corps pallbearers transfer the remains of servicemembers from a C-17 cargo jet to a hangar at Joint Base Pearl Harbor-Hickam, Hawaii, Wednesday, July 17, 2019. The identified remains are Marines or sailors killed during the Battle of Tarawa in 1943. (Wyatt Olson/Stars and Stripes) 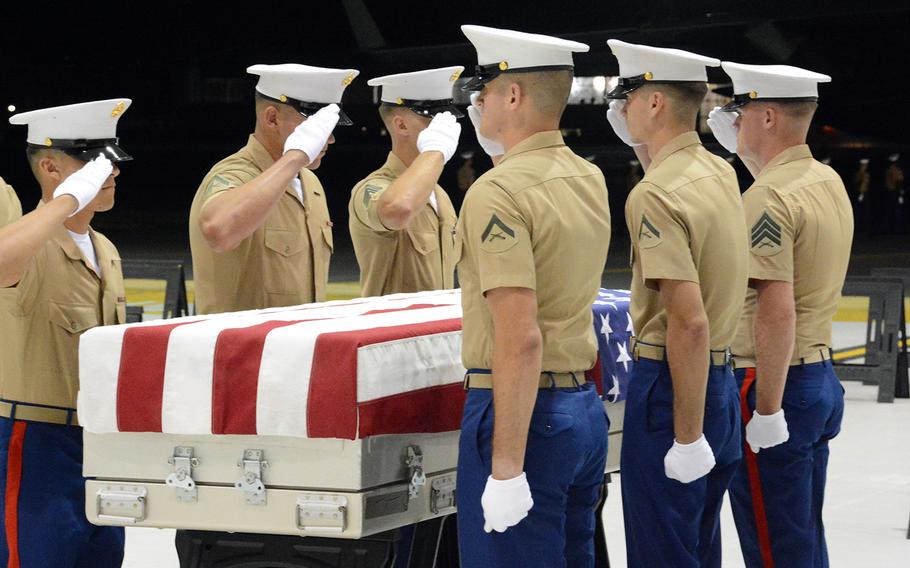 Buy Photo
Marine Corps pallbearers salute the remains of an unidentified servicemember being returned from Tarawa during a ceremony at Joint Base Pearl Harbor-Hickam, Hawaii, Wednesday, July 17, 2019. (Wyatt Olson/Stars and Stripes) 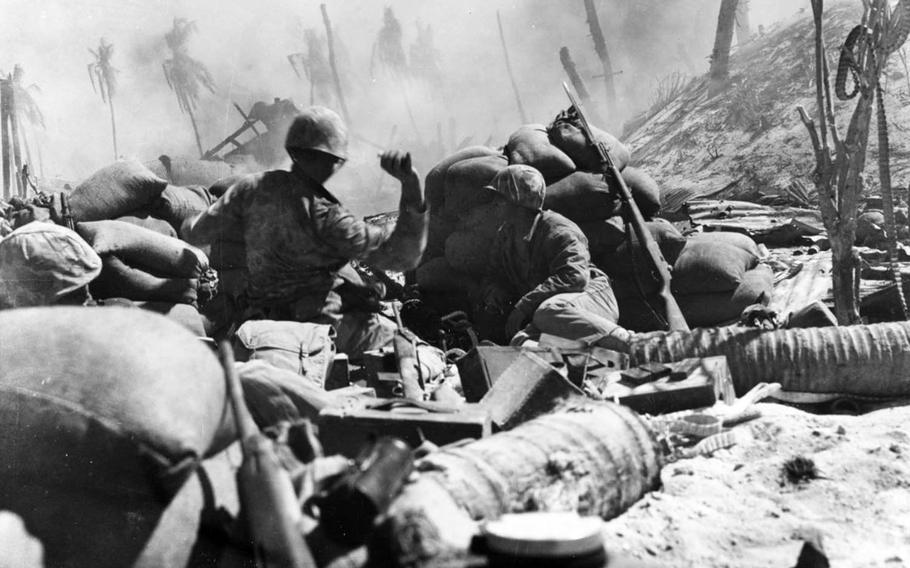 A U.S. Marine throws a grenade on Betio Island during World War II's Battle of Tarawa in November 1943. (U.S. Navy)

JOINT BASE PEARL HARBOR-HICKAM, Hawaii – Cases holding the remains of at least 22 servicemembers killed in the ferocious Battle of Tarawa during World War II were solemnly carried by Marine Corps pallbearers from a C-17 plane into a crowd-filled hangar during a ceremony here Wednesday evening.

“Although more than 75 years have passed, we’re here in formation tonight to honor and welcome home our fellow Marines, brothers in arms who fell long ago in battle, enabling the freedom and security we’ve enjoyed since the end of World War II,” Lt. Gen. Lewis Craparotta, commander of U.S. Marine Corps Forces Pacific, told those in attendance.

“As part of the 18,000 Marines in the battle, their actions changed the world for the better in the face of tremendous adversity, their honor, courage and commitment on display for the world to see,” he said.

The Defense POW/MIA Accounting Agency transferred the remains from Tarawa in 22 cases, though remains from additional servicemembers could possibly be commingled with them.

Forensic anthropologists at the agency’s lab on the joint base will now begin the painstaking work of identifying them through DNA technology, dental records and other tools.

DPAA had earlier held a repatriation ceremony in Tarawa as the remains began their journey home.

More than 500 Marines and sailors were missing in action after the battle, and 429 remain unaccounted for to this day, Rear Adm. Jon Kreitz, DPAA deputy director, told the audience.

“Tonight, we are receiving and honoring at least 22 of those men,” he said.

The Battle for Tarawa began on Nov. 20, 1943, with attacks on Betio Island, which was within the Tarawa Atoll, and on Makin Island, more than 100 miles north of the atoll.

While Japanese resistance was light on Makin Island, defenders on Betio were entrenched and determined. The 76-hour battle cost the lives of 1,021 U.S. Marines and sailors, with another 2,000 wounded, the Pentagon said in a Wednesday news release.

“Servicemen killed in action were buried where they fell or placed in large trench burials constructed during and after the battle,” the news release said. “These graves were typically marked with improvised markers, such as crosses made from sticks, or an up-turned rifle. Grave sites ranged in size from single isolated burials to large trench burials of more than 100 individuals.”

Efforts to exhume the graves and identify remains were hampered due to incomplete record keeping and by the alterations to the cemeteries shortly after the battle, the news release said. In other cases, locations of cemeteries were entirely lost.

Tarawa is now part of the nation of Kiribati.

In March, searchers with the nonprofit organization History Flight discovered a mass grave with remains believed to be from members of the 6th Marine Regiment. The transfer Wednesday represents a portion of remains found at that time. History Flight has been searching for World War II remains in Tarawa since 2007. In 2015, the group uncovered the bodies of 35 U.S. troops, including Medal of Honor recipient 1st Lt. Alexander Bonnyman Jr., who died leading a doomed assault on a Japanese bunker.