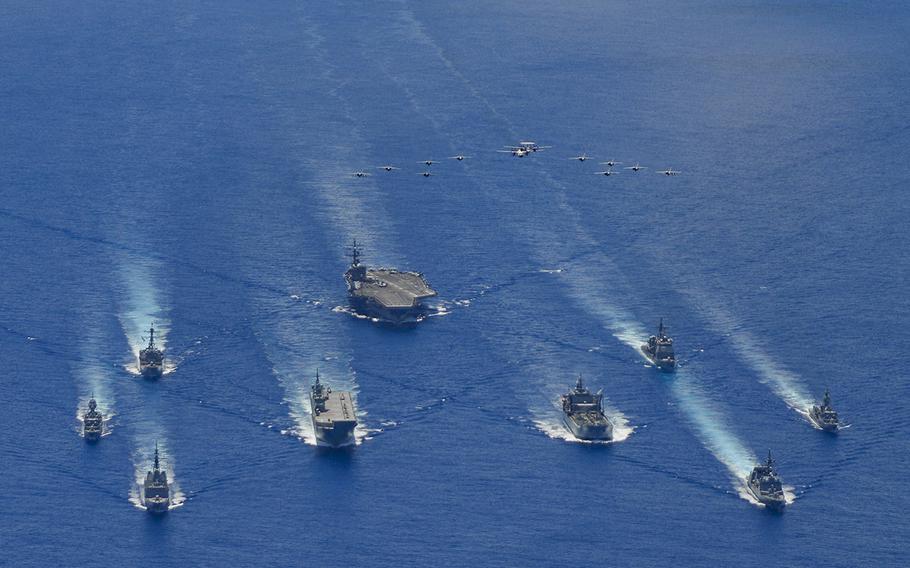 YOKOSUKA NAVAL BASE, Japan — Fresh from two-carrier exercises in the same vicinity, the aircraft carrier USS Ronald Reagan and its strike group teamed up with naval forces from Japan and Australia for further maneuvers in the Philippine Sea, according to a Navy news release Tuesday.

The Reagan, with its embarked air wing and two accompanying warships, joined with five vessels of the Australian Defense Force and one from the Japan Maritime Self-Defense Force to train “in maritime operations” to strengthen allied relations and support “a free and open Indo-Pacific region,” the statement said.

The demonstration of allied sea power occurred as Secretary of State Mike Pompeo, speaking in London at a meeting of British members of Parliament, said Australia should play a leading role in a new coalition to counter Chinese expansion in its regional neighborhood, according to a Wednesday report in the Sydney Morning Herald.

Pompeo on July 13 put the U.S. on record as rejecting sweeping claims to territory in the South China Sea, as well as its claims to control access to the region. Such claims are “completely unlawful,” he said.

The trilateral exercise that began this week is another in a series of naval demonstrations across the Indo-Pacific in the past two months involving U.S. forces alone or alongside its allies.

On Monday, the aircraft USS Nimitz Carrier Strike Group took part in exercises with ships of the Indian Eastern Fleet in the Indian Ocean.

Over the Fourth of July weekend, the Nimitz and Reagan groups rendezvoused in the South China Sea for a series of drills. The pair reunited in mid-July for more training in the same area and were joined Friday by a pair of Air Force B1-B Lancer bombers making overflights from Guam.

“The United States is fortunate to routinely operate alongside its allies across the Indo-Pacific and coordinated operations like these reinforce our mutual commitments to international maritime norms and promoting regional stability,” the Navy quoted Capt. Russ Caldwell, commander of USS Antietam, as saying.