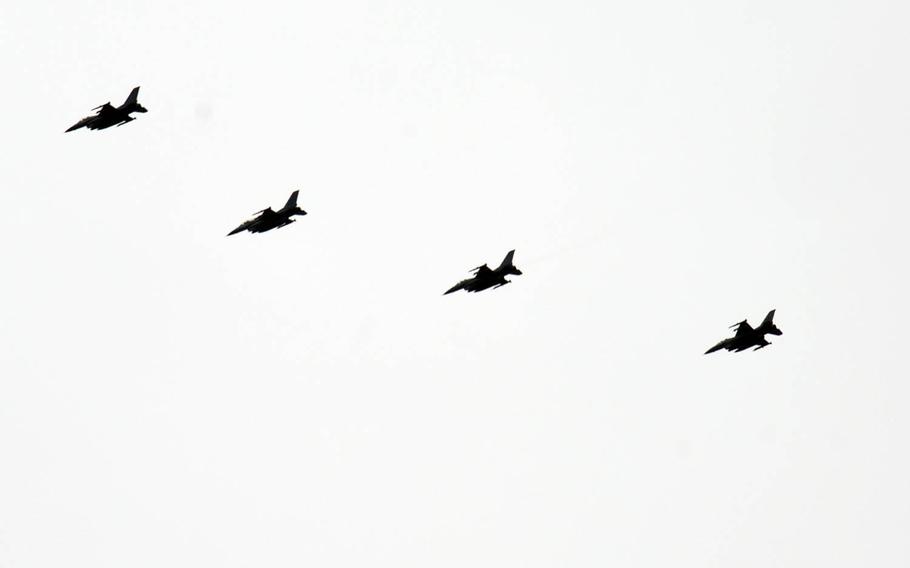 Pilot error was the primary cause an inert bomb was mistakenly dropped outside the confines of a bombing range in November near Misawa Air Base, Japan, the Air Force said.

The bomb, dropped Nov. 6 from an F-16CM fighter jet assigned to the 14th Fighter Squadron, hit the ground outside Draughon Range, a government-owned bombing range 15 miles north of Misawa Air Base, the Air Force said in a news release Sunday.

There were no injuries or deaths, and no private property was damaged, the Air Force said.

The Aircraft Accident Investigation Board report on the incident did not release the name of the pilot.

The primary mission of the 14th Fighter Squadron is suppression of enemy air defenses. It is one of two F-16 squadrons operated by the 35th Fighter Wing, which is headquartered at Misawa.

The pilot was flying with six other aircraft during the night sortie. The pilot tried twice to drop the bomb on the tactical target, but a scattered layer of clouds obscured the target, the investigation said.

After the primary training was complete, the pilot “elected to make another attempt at dropping the GBU-12,” the investigation said.

He requested assistance from two other aircraft to guide the bomb drop. The pilots of those two aircraft located the target visually and informed the bombing pilot that they could guide his weapons, the investigation said.

One of the guiding pilots transmitted a “sensor point of interest,” or SPI, which was located on the correct target.

The bombing pilot, however, misinterpreted the proper target, selecting instead an objective almost 3 ½ miles away.

“This mishap was caused by the [pilot’s] failure to positively identify that the SPI he selected was in fact the authorized target that was located inside of the Range for GBU-12 attacks,” the investigation concluded. “In particular, when cloud cover prevented [the pilot] from visually guiding his GBU-12 to the correct target, he relied on another pilot to identify and lock onto the target.

“The [pilot] failed to correctly perform the procedure for positively identifying the selected SPI and failed to use concise terms per service standards. He performed the action too quickly, causing him to make a mistake.”

Other factors did, however, contribute to the wayward bomb drop.

The pilot’s attention became overly fixated on his aircraft’s tactical display as he made repeated attempts to release the bomb, and this “channelized attention” led to a breakdown in communication, the investigation said.

Cloud cover and darkness led the pilot, who under ordinary circumstances would have visually identified the target himself, to rely on another pilot for the task.

The investigation also concluded that none of the pilots had generated the sensor point of interest on which the bomb ultimately landed. The investigation described it as “spuriously generated” but did not elaborate.

In its news release, the Air Force described it as a “targeting technical error.”