Preserving Pacific history: Stars and Stripes librarian retires after 40 years among the archives 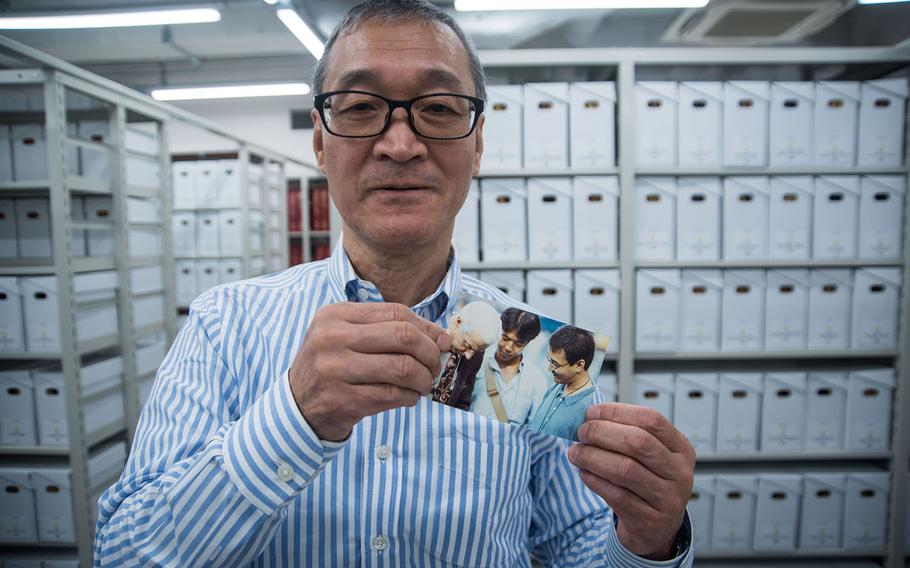 Stars and Stripes librarian Norio Muroi holds a photo of himself, far right, meeting Yankees legend Joe DiMaggio during a reporting assignment in Tokyo in the early 1990s. (Theron Godbold/Stars and Stripes)

Stars and Stripes librarian Norio Muroi holds a photo of himself, far right, meeting Yankees legend Joe DiMaggio during a reporting assignment in Tokyo in the early 1990s. (Theron Godbold/Stars and Stripes) Boxes filled with photographs, newspaper clippings and other materials line the walls of Stars and Stripes Pacific's library at Hardy Barracks in Tokyo, Thursday, Oct. 31, 2019. (Theron Godbold/Stars and Stripes)

TOKYO — Thousands of newspapers dating back to 1945, countless clippings of old stories and half a million priceless photographs fill a room that Norio Muroi has tended for the past four decades.

Stars and Stripes’ library in Tokyo preserves the stories and heroics of countless service members from World War II and the Korean and Vietnam wars alongside records of newsworthy events on American bases in the Far East over the past 75 years.

Muroi, 65, who retires Friday, has worked in the newspaper’s library for more than half of that timespan.

A tailor’s son from Otawara in Tochigi prefecture, Muroi in 1977 was studying economics at Hosei University in Tokyo when he started as a Stars and Stripes copyboy, he recalled during a recent tour of the library at Hardy Barracks, the newspaper’s Pacific headquarters in the Japanese capital.

“It was rare to see American people so much in those days and to have an opportunity to talk with native speakers,” he said of his first days on the job, when he was eager to practice the English he’d learned at school.

Just steps from the nightlife hub of Roppongi, Hardy Barracks was a hive of activity. Dozens of U.S. military and civilian staff and 180 Japanese worked to publish hundreds of thousands of newspapers each day for service members on the main islands of Japan, Okinawa, Korea and other parts of the Pacific such as the Philippines, Vietnam, Taiwan and Guam.

It was an era before online news or Google searches, when printed newspapers provided a vital link to home for troops stationed overseas.

“We were like tennis ball boys,” Muroi said of the copyboys, who spent mornings rushing about the newsroom carrying story drafts and messages to editors. The youngsters burned plenty of calories and looked forward to a free Coke from the sports editor at the end of each shift, he recalled.

Full-time librarian In 1979, he started full time in the library, which had a chief and four Japanese employees. Two kept track of photographs and two were assigned to cut up 10 newspapers each day and sort the clippings into categories that could be researched for future stories.

Known today as the Toshi Cooper Library, it holds at least 250,000 clippings that are stored in envelopes and filed so they can be searched by subject, such as notable figures, military units and campaigns.

But Muroi didn’t spend his entire career among the archives. Some of his most memorable experiences involved serving as an interpreter for journalists in the field.

In February 1982, he and the other librarians acting as temporary linguists joined reporters rushing to a fire at the Hotel New Japan that, ultimately, claimed 32 lives not far from the Sanno Hotel, a U.S. military property.

The following day, Muroi was back in the field as an interpreter after a Japan Air Lines pilot intentionally crashed a DC-8 airliner at Haneda Airport, killing 24 people, he said.

Another memorable linguist assignment involved a ride in a Kodak blimp over Tokyo.

“I even got to sit in the pilot’s seat,” he said. “That’s a rare experience.”

Plenty of famous faces, including Michael Jackson, Billy Joel and Rihanna, have passed through Hardy Barracks during Muroi’s tenure.

Two of the most memorable stars he met on the job were folk musician John Denver and baseball Hall of Famer Joe DiMaggio, Muroi said, proudly showing off photographs of his 1992 encounter with Joltin’ Joe. He met the Yankee legend while helping a sports reporter cover the U.S.-Japan baseball series at the now-demolished Korakuen Stadium.

Valuable resources The library that he’s handing off to his successor, Akiko Takamizawa, is a recently renovated, state-of-the-art facility that features constant temperature and humidity control.

It stores hundreds of large, red volumes that contain original Stars and Stripes newspapers sorted by month all the way back to 1945, and countless clippings and old photographs preserved in hundreds of white boxes on metal racks.

The library has about 500,000 photographs taken by Stars and Stripes staff or sourced from news agencies or U.S. military service branches over the years, Muroi said.

He opened a box of photographs and found black-and-white prints of images taken during the Vietnam War by Gary Cooper, an enlisted Stars and Stripes reporter who eventually married the library’s namesake, longtime librarian Toshi Cooper.

One of those photos shows a wounded soldier getting aid from a couple of buddies on the battlefield. The print, like hundreds of thousands of others in the library, is coded to allow librarians to track negatives stored at the Stars and Stripes Europe library in Kaiserslautern, Germany. The libraries are gradually digitizing those negatives for posterity.

The library isn’t just a valuable resource for working journalists. Muroi’s work also involves tracking down old stories and photographs for veterans or those whose friends or relatives have appeared in Stars and Stripes over the years.

For example, his research skills came in handy when a woman contacted the newspaper in December 2017 looking for old photographs of her father, Gordon Windhorn, who played professional baseball in Japan in the 1960s. The family’s own photographs from that time were destroyed in a fire, Muroi said.

He tracked down images of Windhorn in the library along with other photos held by the Foreign Correspondents’ Club of Japan and the Baseball Hall of Fame Museum in Tokyo and sent them to the family.

Muroi said he’s had plenty of useful advice over the years from Toshi Cooper, who served as librarian from 1948 to 1971. Now chairwoman emeritus of the Stars and Stripes Association, which organizes reunions of former employees, Cooper described Muroi as the ideal newspaper librarian.

“He has everything it takes to be the perfect research librarian,” she said. “He is studious, calm and steady, curious, patient, selfless, a good listener, devoted and above all that, he loves Stars and Stripes.”

Importance of preservation Muroi vividly remembers the library shaking during the massive magnitude 9.0 earthquake that devastated Japan in March 2011.

One of Stars and Stripes’ initial reports on the disaster says the shaking tipped over a television, knocked a clock off the wall and scattered the contents of filing cabinets in the newsroom.

The quake triggered a tsunami that caused a meltdown at the Fukushima Daiichi nuclear power plant and claimed nearly 16,000 lives. At the library, the quake caused water leaks but no damage to the archives. However, the building still has cracks in its walls.

Preserving Stars and Stripes’ archives and other documents in the building is important, Muroi added.

“No matter how digital technology expands in the future the original is coming from here,” he said.

Muroi plans to stay in Tokyo after retirement and spend time hiking with his wife, Yoshiko. The couple’s first trip will be to a Japanese hot spring, he said.

Muroi said what he’ll miss most after leaving the library is access to the old newspapers.

“When I’m retired it will be hard to see the newspapers page by page,” he said. “That’s the part I’ll miss the most.”