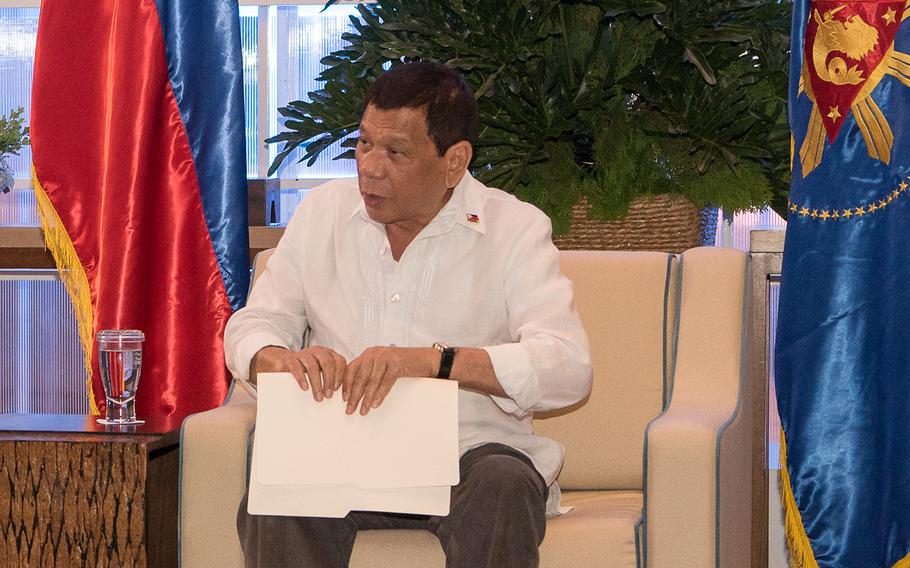 The Philippines may invoke its mutual defense treaty with the United States if it finds the sinking of a Philippine fishing boat this month was the result of an armed attack by the Chinese, a spokesman for Philippines President Rodrigo Duterte said at press briefing Monday.

Spokesman Salvador Panelo said the Philippines will invoke the treaty “if it is the right thing to do with that agreement,” according to a translated transcript of the briefing.

The treaty calls for the U.S. to support the Philippines if it’s attacked by another country, he said.

The Philippines filed a diplomatic protest last week after Filipino fishermen said a Chinese fishing vessel intentionally rammed their boat, the FB Gimver, anchored in Reed Bank on June 9 and left the 22 crewmembers for dead. A Vietnamese boat rescued the sailors, and the Philippine navy later brought them home.

Also Monday, Duterte himself downplayed the significance of the incident, referring to it as “just a collision of ships,” according to a translated transcript of his speech at Naval Base Heracleo Alano in Cavite, Philippines.

Duterte told his audience “not to believe stupid politicians” who want to activate the navy in response to unproven accusations.

“You do not send gray ships there. It’s just a collision — do not make it worse,” he said, according to the transcript.

Reed Bank, about 93 miles from the Philippine island of Palawan, is in the South China Sea and within the Philippines’ exclusive economic zone, according to a 2016 ruling by the Permanent Court of Arbitration at the Hague.

Beijing disputes the allegations, saying the Chinese boat “was suddenly besieged by 7 or 8 Filipino fishing boats,” and crashed accidentally into the Philippine vessel while trying to evacuate, the Chinese embassy in Manila said in a Saturday statement.

“The Chinese captain tried to rescue the Filipino fishermen but was afraid of being besieged by other Filipino fishing boats,” the statement said.

In a Friday interview with Philippine broadcaster One News, U.S. Ambassador to Manila Sung Kim said it would be “a very serious situation” if the Filipino fishermen’s accusations are verified.

Kim also told One News that “any armed attack on Filipino vessels, Filipino aircraft will trigger our obligations under the Mutual Defense Treaty,” and that the treaty covers attacks on Philippine forces and public vessels.

Philippine Secretary of Foreign Affairs Teodoro Locsin Jr. at a meeting Monday of parties to the United Nations Convention on the Law of the Sea said that “while no sanction is available in international law,” the alleged abandonment of the Philippine boat “should be a cause of some concern.”

“The incident, to put it diplomatically, highlights the moral and possibly legal — though one wouldn’t wager on it — imperative of coming to the rescue of persons in distress at sea,” Locsin said, according to a transcript of the meeting.

Both the Philippines and China have launched investigations into the collision, presidential spokesman Panelo said Monday, according the transcript.

Chinese Foreign Ministry spokesman Lu Kang at a Monday press briefing said China is working with the Philippines to investigate the matter but stressed “this is only an accidental collision between fishing boats.”

“It is irresponsible and counter-constructive to link this incident with China-Philippines friendship or even make political interpretations out of it,” Lu said. “We are ready to enhance communication with the Philippine side on the investigation, increase understanding, dispel mistrust and find out what actually happened.”