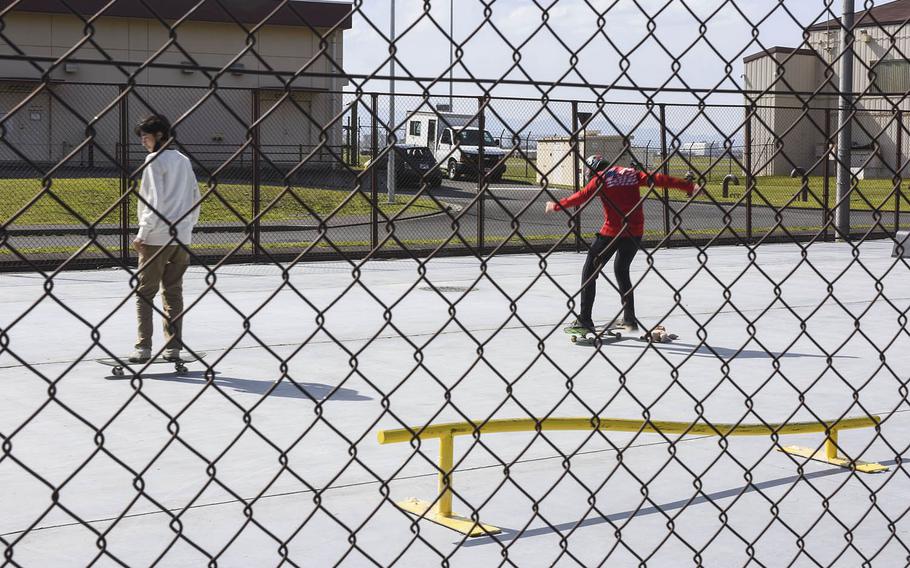 YOKOTA AIR BASE, Japan – Teenagers are zooming around a newly renovated skate park at the home of U.S. Forces Japan in western Tokyo after convincing the base commander to approve the work.

The skate park, on the east side of the base, was torn down last year after damaged asphalt and rusting equipment rendered it unsafe. No funding was available to restore the park.

Vogeley, with Wellons’ help, gathered nearly 250 signatures on an online petition calling for a new park or dedicated skate spot that he presented to Col. Andrew Campbell, commander of Yokota’s 374th Airlift Wing, in February.

The petition jump-started a project to refurbish the skate park that reopened April 9, Lt. Col. Bradly Bucholz, commander of the 374th Civil Engineer Squadron, told Stars and Stripes in an email April 21.

“Their getting involved and advocating for the needs of the community in a polite and diplomatic fashion was a great initiative and catalyst for outside-of-the-box thinking that linked our training mission to a community need and brought the project to reality,” he said.

Craftsmen from the squadron removed and replaced the old skate park asphalt, using the project as an opportunity to practice concrete finishing, a critical skill, base spokesman 1st Lt. Stuart Thrift said in the April 21 email. He said the concrete is 5 inches thick with wire mesh reinforcement.

The engineers used concrete and other materials left over from previous projects to restore the skate park at no cost to mission-related funding, he said.

In addition to a smooth concrete surface, the renovated park includes improved drainage, lighting and a fence. Plans call for further park improvements, including larger ramps and obstacles, and parts are on order to repair the park’s lights, Thrift said.

On Friday afternoon, Wellons and Vogeley were at the skate park trying out some tricks on the ramps and rails.

Both boys said they’re excited about the new facility and looking forward to watching skateboarding in its first appearance at Olympic Games in Tokyo this summer.

Wellons, who has been skating about 18 months, was stoked to try out some ollies and 180s.

“I’m pretty happy with it,” Vogeley said. “The concrete is awesome.”