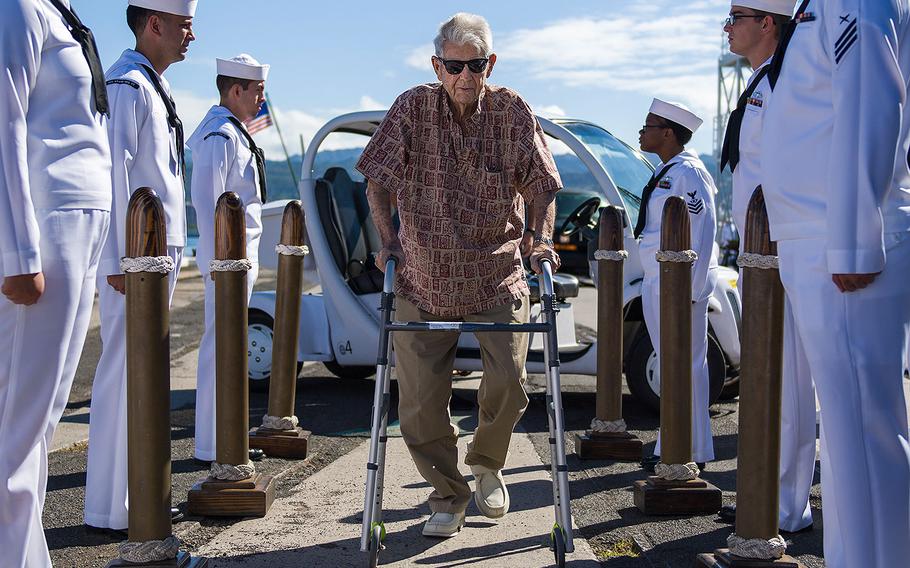 Retired Chief Boatswain's Mate and Pearl Harbor survivor Ray Emory is rendered honors by the sideboys during a farewell ceremony held before he departs Hawaii to be with family on June 19, 2018. Emory was responsible for the identification of unknown service members killed in the attacks on Pearl Harbor who were buried in unnamed graves. (Justin Pacheco/U.S. Navy)

Retired Chief Boatswain's Mate and Pearl Harbor survivor Ray Emory is rendered honors by the sideboys during a farewell ceremony held before he departs Hawaii to be with family on June 19, 2018. Emory was responsible for the identification of unknown service members killed in the attacks on Pearl Harbor who were buried in unnamed graves. (Justin Pacheco/U.S. Navy) 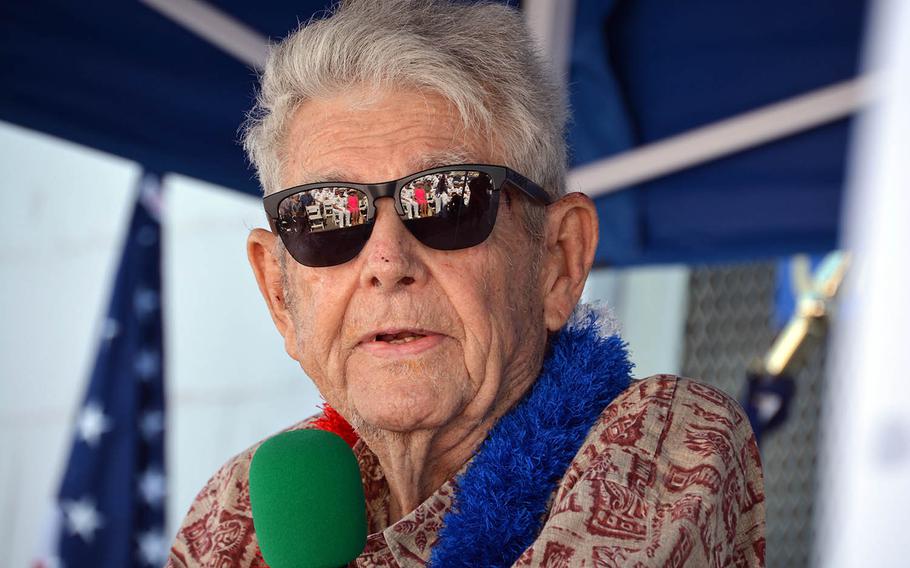 Buy Photo
Ray Emory, who manned a .50-caliber machine gun aboard the USS Honolulu to defend against the Dec. 7, 1941, surprise attack on Pearl Harbor, speaks to sailors and family members gathered during a farewell ceremony, June 19, 2018, near where the ship was berthed in Pearl Harbor. (Wyatt Olson/Stars and Stripes)

FORT SHAFTER, Hawaii — Ray Emory, a Navy veteran who survived the Pearl Harbor attack and dedicated decades of his life to identifying fellow sailors who were killed that day and buried as “unknowns,” died Monday in Boise, Idaho. He was 97.

The longtime Hawaii resident was feted in June in a dock-side ceremony at Pearl Harbor near the place his ship, the USS Honolulu, was berthed during the Dec. 7, 1941, surprise attack by Japanese aircraft.

As Emory arrived at the ceremony, he was greeted by 520 sailors in dress whites forming a dock-side honor cordon and ship-rail salute.

He told the sailors and guests gathered at the ceremony he was ready to “head for the mainland and get my head screwed back on” after the death of his wife, Jinny, a month earlier. He went to live with family members in Idaho.

Like many World War II veterans, Emory was a child of the Great Depression.

“When the Depression hit, my mother and dad didn’t have a penny,” he said of his early years in Peoria, Ill., in a story published by the Navy in 2012.

“There were seven of us and an eighth on the way,” he said. His father had lost a leg in a hunting accident.

As American military involvement against Nazi Germany and Imperial Japan appeared ever more likely in the early 1940s, Emory got the itch to serve in the armed forces.

“The war in Europe was getting hot,” he said. “They were about to pass the draft law. I swung by the post office and talked to the Navy recruiter. “When I got home – I can still see it. My dad was reading the newspaper, and my mother was darning socks.” When he announced he’d joined the Navy, his father dropped his newspaper and sputtered, “You did what?!”

On the morning of Dec. 7, he was sitting on his bunk reading the morning newspaper when heard general quarters sounded.

“I hit the ladder in about two steps,” he said. “When topside, I heard machine gun fire. My thought was, ‘This is a really good drill.'”

He reached his battle station – the .50 caliber machine guns – and had not even gotten the canvas covers off them before a Japanese torpedo plane zoomed past the ship’s fantail. He watched a torpedo from that plane rushing through the water toward one the battleships. As another torpedo plane swooped down, the first torpedo found its target and Emory said a “big red ball” of fire filled the harbor.

“Upon breaking the ammo box open, the machine guns were manned,” Emory said. “Anything that was close enough to fire at we fired, but who knows who hit who.”

A year after the war ended he participated in the atmospheric nuclear tests in Bikini Atoll.

That same year, 1946, Emory left the Navy as a chief boatswain’s mate. He earned a degree in architecture at the University of Washington and worked in mechanical engineering and construction in the Pacific Northwest until retirement.

Return to HawaiiEmory returned to Hawaii in the mid-1980s and made it his home. He spent much of the time since then researching in an attempt to identify the remains of servicemembers who died aboard the USS Oklahoma on Dec. 7 and buried as “unknowns” in the National Memorial Cemetery of the Pacific in Honolulu, also known as the Punchbowl.

He lobbied vociferously to have the remains exhumed and scientifically identified.

Emory had been faced with “a lot of hardheaded people who were against him” in his effort to identify the unknowns, Taylor said.

But to Emory’s lasting legacy, his tenacity prevailed.

In the past few years, most of the unknown graves have been exhumed and transferred to the lab at the Defense POW/MIA Accounting Agency at Joint Base Pearl Harbor-Hickam for identification. More than 100 of them have been identified.

“If it wasn’t for you, it would have never been done,” Taylor said to Emory during the ceremony.

Taylor presented Emory with a shadowbox holding an official POW-MIA flag, telling him, “The bottom line is, you are not forgotten. And all those 100 people that you have personally been involved in identifying, they were not forgotten.”

Details of a memorial service to be held in Hawaii will be announced in the coming weeks.