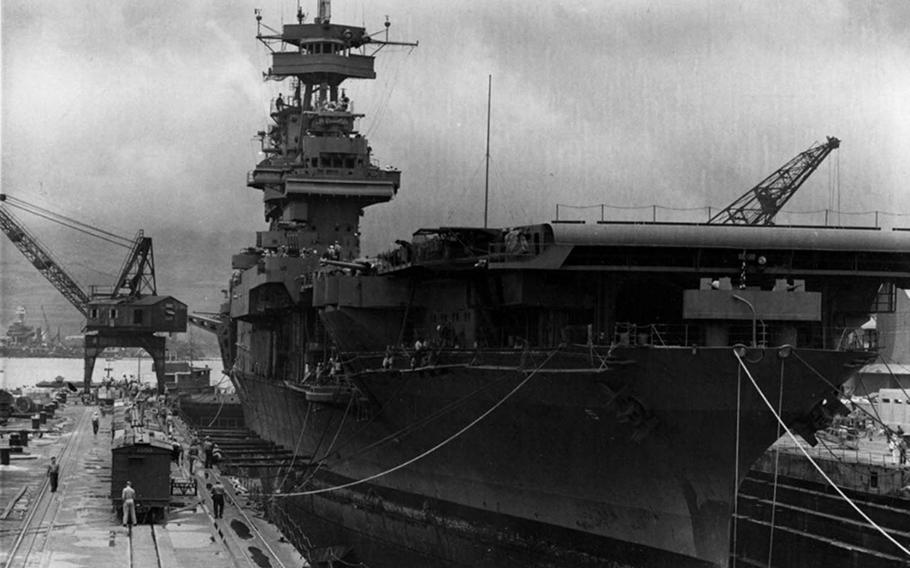 USS Yorktown undergoing repairs in Dry Dock 1 at the Pearl Harbor Navy Yard on May 29, 1942, the day before setting sail for Midway Island. (U.S. Navy)

USS Yorktown undergoing repairs in Dry Dock 1 at the Pearl Harbor Navy Yard on May 29, 1942, the day before setting sail for Midway Island. (U.S. Navy) 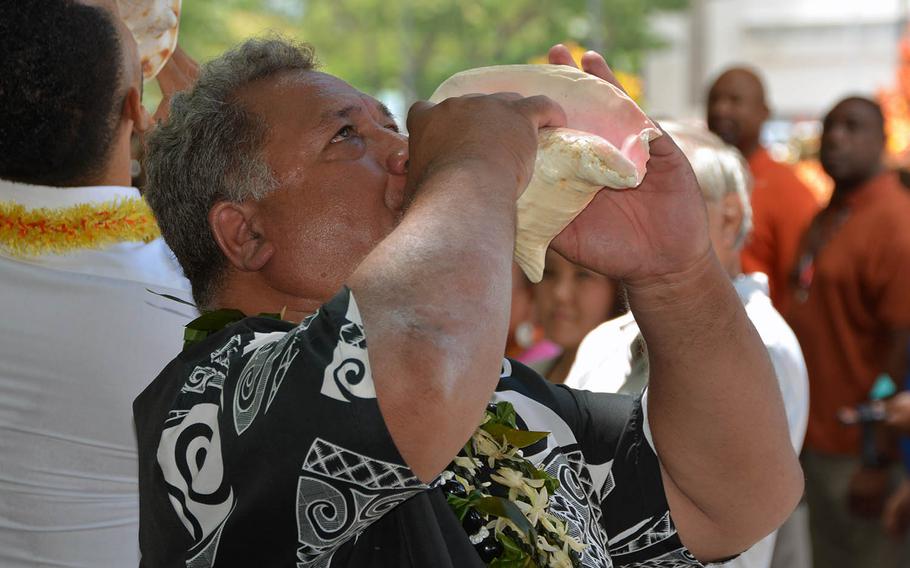 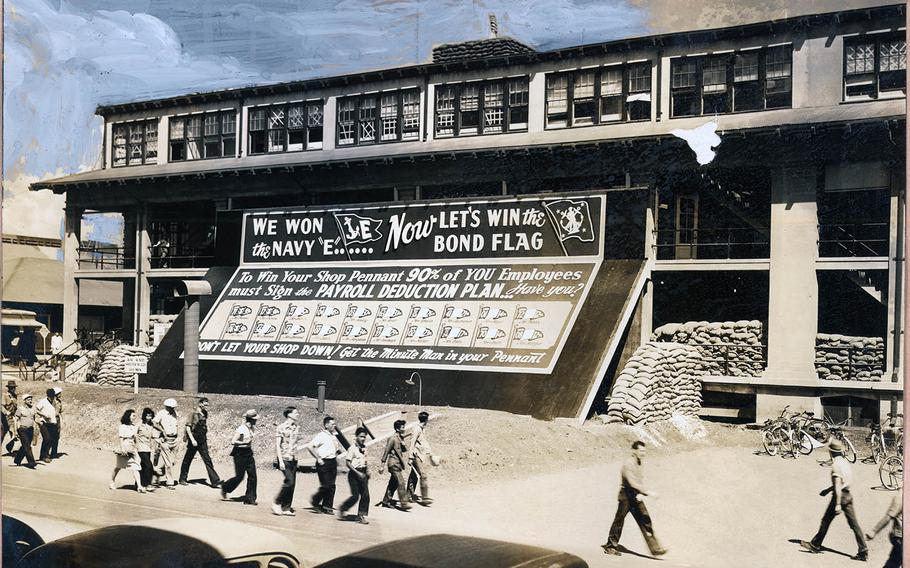 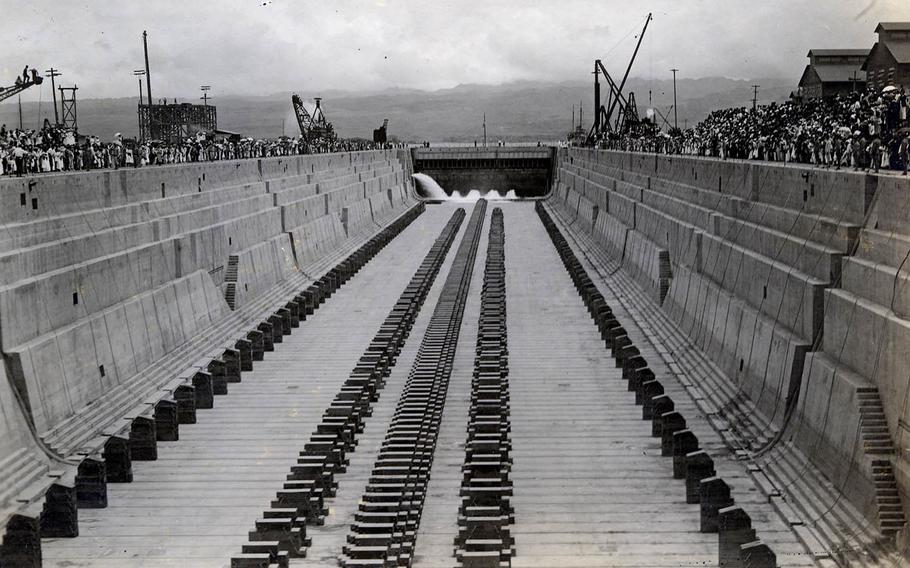 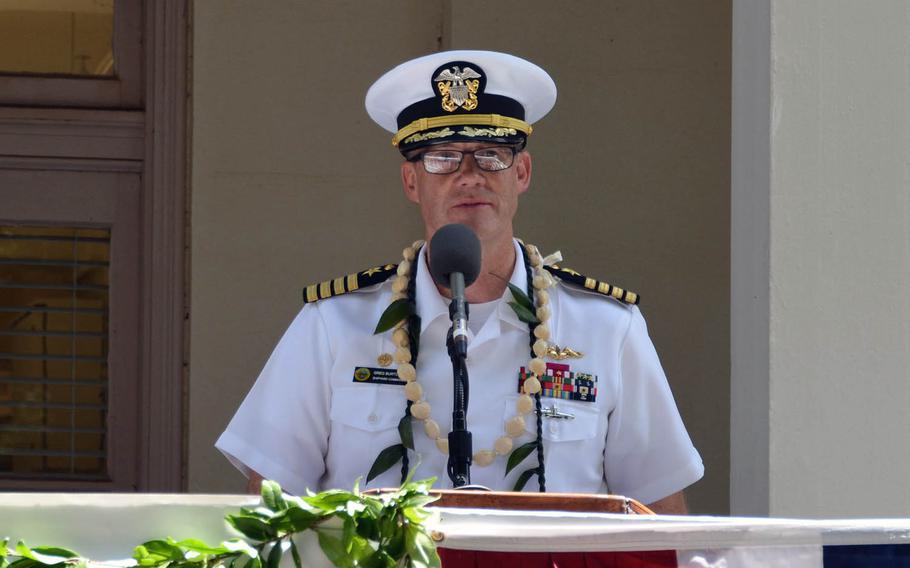 JOINT BASE PEARL HARBOR-HICKAM, Hawaii — The Pearl Harbor dry dock that was key in turning the tide of World War II in America’s favor was bestowed a Hawaiian name Wednesday to commemorate its centennial anniversary.

Workers at the shipyard labored around the clock for three days in late May 1942 so that the aircraft carrier USS Yorktown could take part in the Battle of Midway, regarded by many historians as the turning point in the Pacific war.

Pearl Harbor Naval Shipyard’s Dry Dock 1, which began operation in 1919 with its flooding, was given a Hawaiian blessing during a Wednesday ceremony and named Keaoonamano, which translates to “The Realm of the Sharks.”

The shipyard’s Building 1 — the site’s historic centerpiece that housed the analysts who broke Japan’s secret code during World War II — was also given a Hawaiian name: Keaowamaluhia, or “The Light in the Time of Peace.”

The names were conferred in partnership with the Alii Pauahi Hawaiian Civic Club, the state’s Office of Hawaiian Affairs and the Hawaii Department of Natural Resources.

Dry Dock 1 was built on ground held sacred by the people who lived on the shores of Pearl Harbor, Capt. Gregory Burton, commander of the shipyard, told the audience of roughly 500 attending the ceremony celebrating the 100-year milestone.

The new Hawaiian name is “an offering to their deified ancestors, including the shark goddess, who have protected the inhabitants since the time of creation,” Burton said.

He said the name is “quite applicable” for a Navy installation.

“As I understand it, these ancestors act as guardians or protectors,” Burton said. “The Navy has been doing the same on a global scale.”

Several hundred shipyard employees stood a short distance away watching the ceremony. Addressing them from the podium, Honolulu Mayor Kirk Caldwell said, “For the past 100 years, you guys, the workers here, have kept our Navy and our different branches fit for fighting.”

The 148-acre shipyard — which is made up of 119 buildings and dozens of piers, wharves and other structures — has a workforce of about 5,800 civilians and 540 Navy personnel. It is the single largest industrial employer in the state.

The shipyard was at the heart of the Japanese surprise attack on Oahu on Dec. 7, 1941.

As sailors and Marines mounted the best defense possible, hundreds of unarmed civilian employees at the shipyard did what they could.

“Civilian workers rushed to put out hundreds of fires around the harbor, organized ammunition-passing parties, worked on disabled engines and cut men out of holds of sunken ships,” Burton said. “These workers saved lives. They were protectors.”

But perhaps the most significant contribution the shipyard workers made was the 72 hours of mad-scrabble repair work they did on the carrier USS Yorktown, which had been badly damaged in May 1942 during the Battle of the Coral Sea near Australia.

Experts estimated that the Yorktown would need to be in dry dock for at least two weeks to make it battle worthy.

But the code-breakers working in Building 1 had deciphered enough Japanese naval messages to discover that the enemy fleet was planning a major operation in early June near the Midway Islands, about 1,300 miles northwest of Honolulu.

Although the Yorktown was sunk during the Battle of Midway, it played a crucial role in routing the Japanese, who lost four aircraft carriers – a stunning injury from which they never recovered.