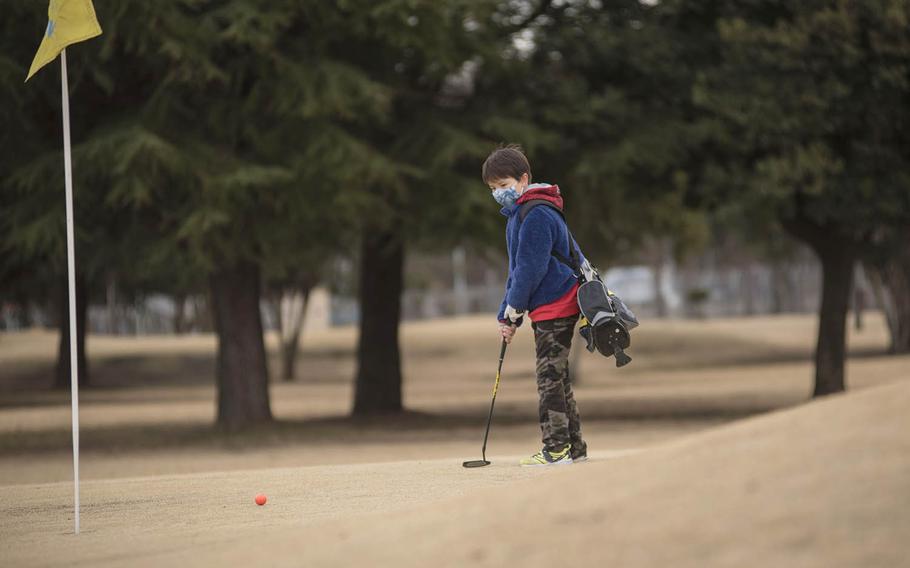 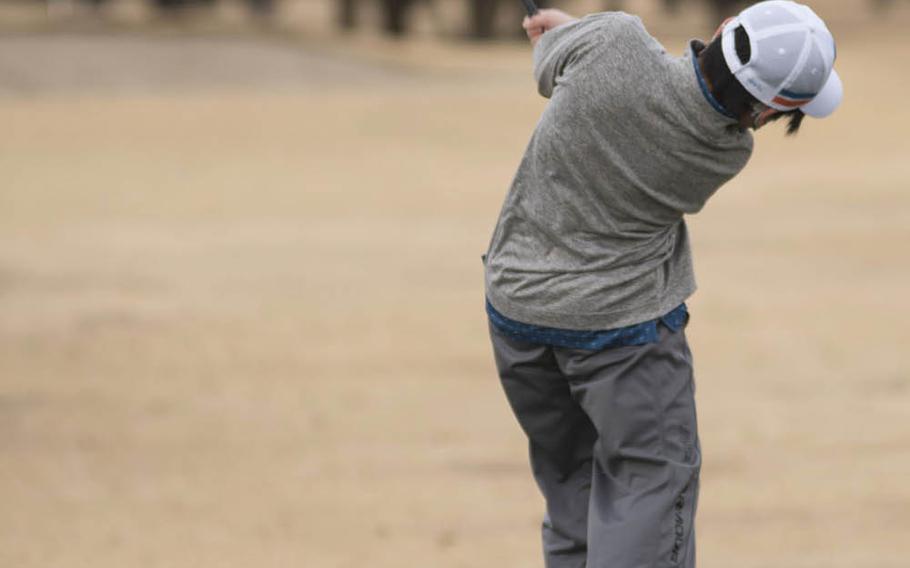 Jayden Ruby tees off during a round of golf on the Par 3 course at Yokota Air Base in western Tokyo, Thursday, Feb. 18, 2021. (Akifumi Ishikawa/Stars and Strip) 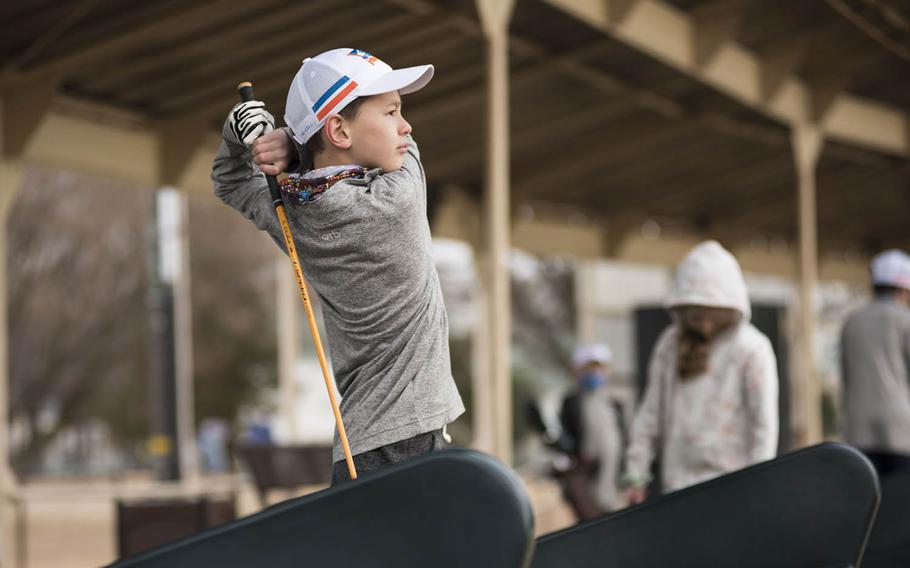 YOKOTA AIR BASE, Japan – Junior golf is thriving at the home of U.S. Forces Japan in western Tokyo, as dozens of youngsters seek out alternatives to team sports and other activities that were shut down because of the coronavirus. Dozens of masked kid golfers swarmed Yokota’s Par 3 course and driving range Thursday for their weekly practice session. Participation has grown steadily over the past year, from 60 kids to 90, according to Yokota golf captain and PGA professional Patrick Bowman, one of four coaches working with the kids. “COVID-19 has boosted the numbers,” he said, referring to the respiratory disease associated with the virus. Ninety Yokota kids are signed up for $75-a-year junior golf memberships in two teams – the Tama Hawks and the Fuji Flyers. About 25 of their moms have formed their own group – the Cherry Blossoms – and meet for casual rounds. When other sports and activities shut down, and even when schools closed last year, the golf sessions continued, Bowman said. “We chose to keep doing this,” he said. “[Air Force leadership] didn’t give us a reason to stop it. The rule was, just don’t get COVID.” Some of the golf kids have been quarantined because of contacts with cases in the community but no infections have been linked to golf, Bowman said. “It’s fun but everybody gets to kind of stay away from each other,” he said. “We’ve never had a scare.” The junior golf sessions, which are an official PGA program, aren’t intended to groom future professionals. They’re supposed to be a fun social activity, Bowman said. The kids learn the basics of swinging, chipping and putting along with golf ethics, such as fixing divots and pitch marks and raking bunkers. But a big part of the sessions are two-kid scrambles where only the best shots count, Bowman said. Among the kids smacking balls Thursday at Yokota’s driving range was Marcella DeBuysere, 7. She said she tried golf for the first time this year at the urging of a friend and was hooked. Her favorite pro golfer is Tiger Woods, who has the same name as her kitten. Her goal is to beat her brother, Cohen, 9, she said, before launching a drive several yards down the range. Young linksman Vladimir Urbancek, 10, a fourth-grader at Yokota West Elementary school, has already birdied the eighth hole at Yokota, a simple wedge onto a raised circular green. But his favorite hole is the ninth, a challenging shot to a narrow green circled by three bunkers, including one so deep it would challenge even the savviest sandman. “You try to not get in there” Urbancek said. His sister Violette, 12, a sixth-grader at Yokota Middle School, said her favorite part of the golf sessions is a game called putt-tac-toe, where the kids putt balls into squares on the green to try to get three in a row. When she wins, she yells, “Rematch!” she said. Their dad, Air Force Lt. Col. Vladimir Urbancek, showed up to hit a few balls alongside his kids. “They are missing out on soccer and stuff,” he said. “Here, they can be with friends outside and it gets them away from their video games.”

The increased interest at Yokota tracks a national trend as people turn to golf and other outdoor, socially distanced sports during the pandemic. The National Golf Foundation reported a 37% increase in the number of rounds played in the U.S. in December over the same month in 2019. “Overall, play during 2020 was up 13.9% over 2019, putting the year-end total at around 500 million rounds,” the foundation said.robson.seth@stripes.com Twitter: @SethRobson1