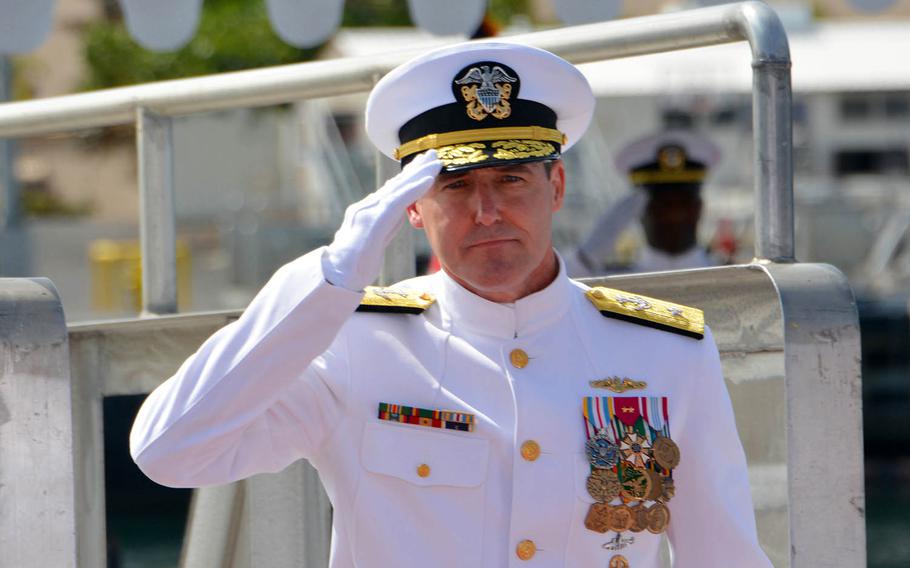 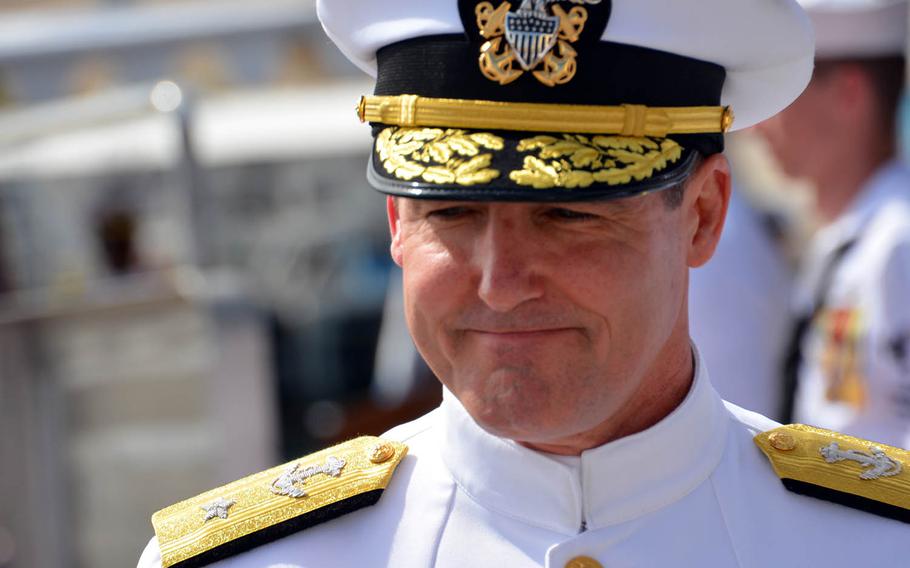 “First, I worked to improve the lethality of our undersea enterprise across the range of combat operations,” said Caudle during a change of command ceremony Thursday.

“If called to fight, we will have one chance to get it right, and the submarine force will be relied on to lead the way,” Caudle said, speaking from atop the pier-side attack sub USS Mississippi. “We are the seize-the-initiative force, designed to tenderize the maritime battlefield and ensure a decisive victory.”

Caudle, who is headed to a post with the Joint Chiefs of Staff in Washington, D.C., turned command over to Rear Adm. Blake Converse, who most recently led Submarine Group 9 in Silverdale, Wash.

“For a year and a half, flawless execution, driving a force of 13,000 sailors and civilian warriors, three task forces and over 105 shore- and sea-based activities,” Aquilino said.

As chief of all Pacific submarines, Caudle oversaw 60 percent of the Navy’s submarine force, in an area that covers roughly two-thirds of the globe.

“To sum that up, [Caudle] has instilled a warfighting culture at SUBPAC and ensured all of his forces were ready to deploy when the nation called, 24-7, 365,” he said.

Caudle’s successor, Converse, was last stationed in Hawaii 20 years ago as a lieutenant commander in the same force he now commands. His sea tours have included USS Lapon, USS Olympia and USS Minneapolis-Saint Paul. He commanded the USS Louisiana from 2006 to 2009.

As the pace of technological innovation continues to grow, SUBPAC’s success will depend on the ability to adopt new capabilities and train crews to effectively employ them, Converse said.

“That’s going to require a high level of individual competency, much higher than we demand of our sailors today,” he said.

It will require “a forward-leaning shore-training infrastructure geared toward preparing submarines for combat operations,” he said. “I know we’re keyed to do that.”

A SUBPAC commander serves as the principal adviser on submarine matters to Aquilino and also oversees the nation’s ballistic missile submarine fleet operating in the Pacific on behalf of Air Force Gen. John Hyten, commander of U.S. Strategic Command.

Aquilino joked that reporting to so many bosses and overseeing such a vast area of responsibility makes SUBPAC command “the hardest job in the Navy.”

In his remarks, Caudle continually returned to the theme of submariners as warfighters, emphasizing the underwater fleet’s importance in the Pentagon’s shifting focus on great powers competition.

“I’ve tried to create an environment designed to embrace and empower a culture of warfighting in every single thing we do,” he said. “We must frame our peacetime missions, our periodic exercises and our competency development efforts in the context of combat in order to give our sailors and officers the proper perspective, a strong sense of ownership and the vision of purpose to underpin the energy we apply each day to personnel and material readiness.

“While our role against China and North Korea is perhaps more obvious, Pacific submarines are also essential against a resurgent Russia and a persistent Iranian threat in the Middle East,” he said.

“Our submarines are prepared to conduct the full range of combat operations across three fleets, including countering transnational threats and violent extremists.”