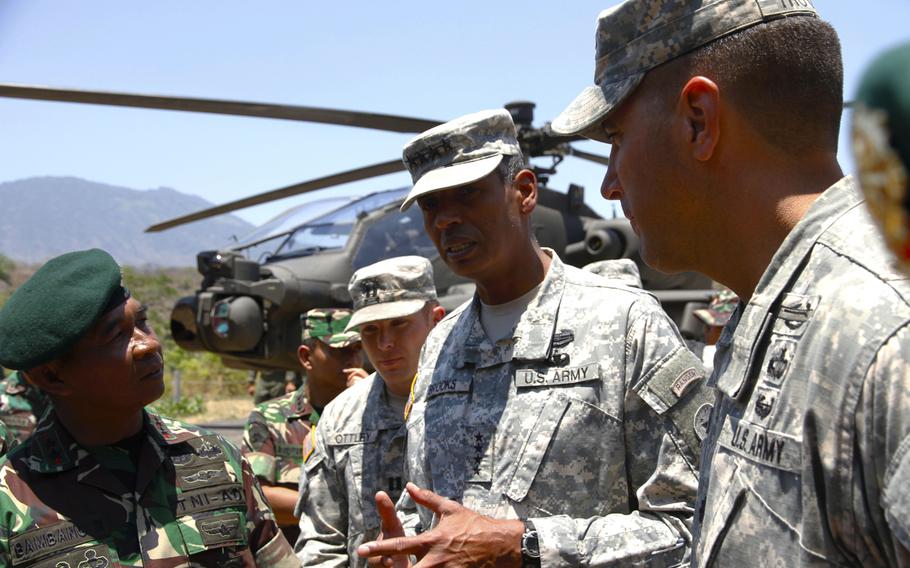 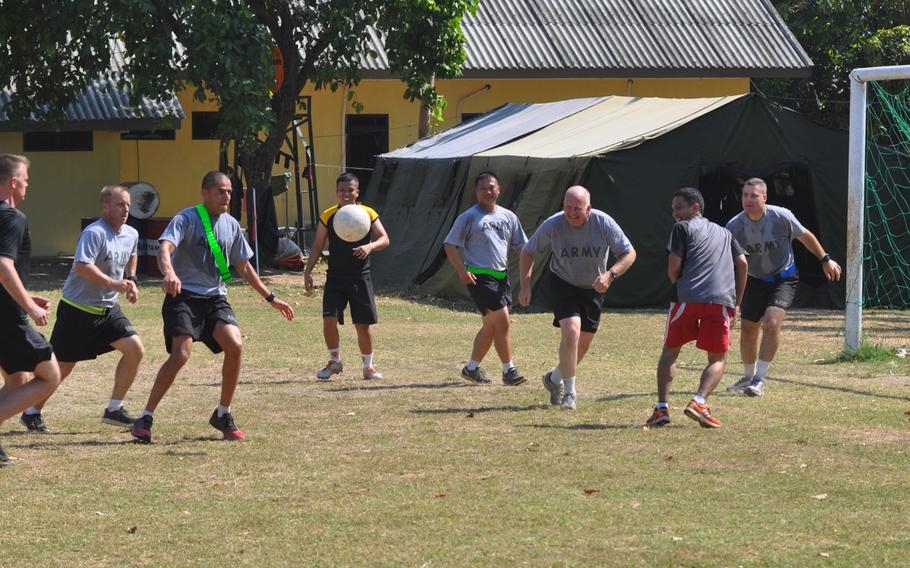 Soldiers play a game of early morning soccer at Puslatpur Marine Base during Garuda Shield exercise. Most mornings Indonesian and American soldiers joined in PT and soccer games. (Wyatt Olson/Stars and Stripes)

FORT SHAFTER, Hawaii — In the wake of President Barack Obama's Asia trip aimed at offering reassurances that the administration remains committed to the Pacific rebalance, U.S. Army Pacific is planning to bolster the land-based force’s relevance in the region.

Under Pacific Pathways, the Army will develop small units that will be forward-deployed for quick response to humanitarian emergencies or regional threats.

The plan is also a way for the Army to create a semi-permanent presence in parts of the Pacific where it’s not politically or financially feasible to establish bases. And because the unit and much of its equipment will remain forward deployed, it will provide an efficient resource in a time of budget cuts and a shrinking military.

But analysts and some military leaders have questioned whether the initiative will duplicate Marines’ skills and assets and is a “solution in search of a problem.”

While the plan would use the series of established military exercises with Pacific nations as “training pathways,” it will also support more substantial exchanges of subject expertise and personnel, USARPAC spokesman Jim Guzior wrote in an email to Stars and Stripes.

The Army is involved in a host of annual multilateral exercises in the Pacific, with countries such as the Philippines, Malaysia, Singapore, Indonesia, Cambodia and India. Materiel is normally transported to and from each exercise at great expense. Instead of a series of Army units traveling to an exercise for 10 to 30 days and returning home, the new pathways model would deploy a smaller unit whose “nucleus” will move from one exercise to the next, USARPAC commander Gen. Vincent Brooks told reporters earlier this month during a land force symposium held in Honolulu.

And implementation of the plan is months, not years, away.

“We are headed toward being ready to start loading the vessels that are going to move here in a few months,” Brooks said. “It’s not just an idea; we’re going into execution with this.”

The new units would be made up of about 700 troops, although the number will vary depending on the mission. Deployments could potentially last six months or longer.

On Monday, Obama announced a 10-year agreement with the Philippines that gives the U.S. military greater access to certain bases on the archipelago. Pacific Pathways will undoubtedly benefit from large equipment that can be pre-positioned under the agreement.

“I think that Pacific Pathways is a direct response to the Pentagon’s 2012 Defense Strategic Guidance to rebalance toward the Asia-Pacific region,” Christopher Dougherty, a fellow at the Center for Strategic and Budgetary Assessments in Washington, D.C., wrote in an email interview with Stars and Stripes. “For decades, Korea has been the primary focus of Army forces in [U.S. Pacific Command], and Pacific Pathways is an attempt to break out of that mindset and demonstrate that the Army can contribute to stability and security beyond the Korean peninsula. If the Army can do that, they may be able to argue more successfully for preserving their end strength and budget.”

Brooks told reporters that Pacific Pathways will be built around a truncated brigade structure, taking its leadership and one or two of its subordinate battalions, then adding elements that are not “organic” to a brigade, such as aviation. The unit will morph to adapt to the particular needs of partner nations and any given exercise.

The number of soldiers under Brooks’ command has increased during the past several years to 106,000, he said, but funding is not keeping pace. Pacific Pathways is “an efficient way for us to use the limited resources that we’re going to have,” he said.

Brooks declined to say from where soldiers for the new unit would be drawn. Outside of South Korea, most of the troops under his command are either in Hawaii or Joint Base Lewis-McChord in Washington state.

A Washington Post article in December framed the initiative as setting up a “turf battle” with the Marines, the service that is designed to maneuver amid sea, shore and land.

Indeed, the Marines are already positioned for a similar role. The 31st Marine Expeditionary Unit conducts multilateral activities from Okinawa, and by 2016, about 2,500 Marines are expected to be rotating through a southern base in Darwin, Australia, every six months.

In January, the Washington, D.C.,-based Brookings Institution published a brutal assessment of Pacific Pathways by Marine Lt. Col. Aaron Marx, describing the Army’s proposed expeditionary model in the Pacific as not a supplement to the Navy and Marines but as “simply a less-capable replication.” He dismissed it as a Marine Expeditionary Unit “without the ships, the expertise or doctrine.”

During the April land-forces symposium, Maj. Gen. Richard Simcock, deputy commander of U.S. Marine Corps Forces, was asked during a panel how the Marines and Army can clearly define their roles in the Pacific. He said that just as he heard criticism during the 12 years of operations in Iraq and Afghanistan that the U.S. didn’t need two armies, he’s now hearing there’s no need for two Marine Corps.

He said the commitment of the Marine Corps as an “extended land force” was “maybe not the best mission” for the service but argued it was what the nation needed during operations Enduring Freedom and Iraqi Freedom. “Pacific Pathways may not be the best fit for the U.S. Army, but it may be what is required for the United States right now and throughout the Pacific region.”

Dougherty called this an “imperfect” analogy because there was “an obvious demand” for more ground forces in Afghanistan and Iraq.

“Put another way, there was a pressing problem and a clear solution,” he said. “Pacific Pathways, on the other hand, looks like a solution in search of a problem. There does not appear to be insatiable demand in the Asia-Pacific region for combined training exercises with U.S. infantry battalions. At a time when the Army’s budget is declining and there are other more pressing problems to solve, this may not be the most efficient use of resources.”

Even some high-ranking brass have wondered aloud about the logistics. Lt. Gen. John Wissler, commander of the Third Marine Expeditionary Force and Marine Forces Japan, told reporters in April that the Navy’s shortage of amphibious battle ships could inhibit Pacific Pathways.

Even Brooks admitted that bringing Pacific Pathways to implementation has been slow, particularly because it involves diplomatic and military relationships with a number of Asian nations.

“Anything that looks like a change has to be understood and accepted in the region and done transparently,” he told reporters.

Peter Chalk, a senior political analyst at the RAND Corp. who has written about the Army’s future role in Southeast Asia, said the concept of small Army expeditionary forces would enhance the service’s ability to deliver and disseminate humanitarian supplies, restore critical infrastructure and provide emergency medical support.

“I think the key is that they have to be small because within the Asia-Pacific there is still an awareness and a suspicion of large-scale U.S. forces being stationed in their region that would unwittingly involve these countries in regional power plays between Washington and Beijing,” Chalk said.

“If the Army continues to shrink,” Dougherty concluded, “Pacific Pathways may help offset the effects of a smaller force by maintaining combat forces forward. This would greatly reduce the time required to get forces into theater as compared with units stationed in the continental United States, thereby improving the Army’s ability to respond quickly to crises.”