Pacific Fleet admiral to retire after being passed over for promotion 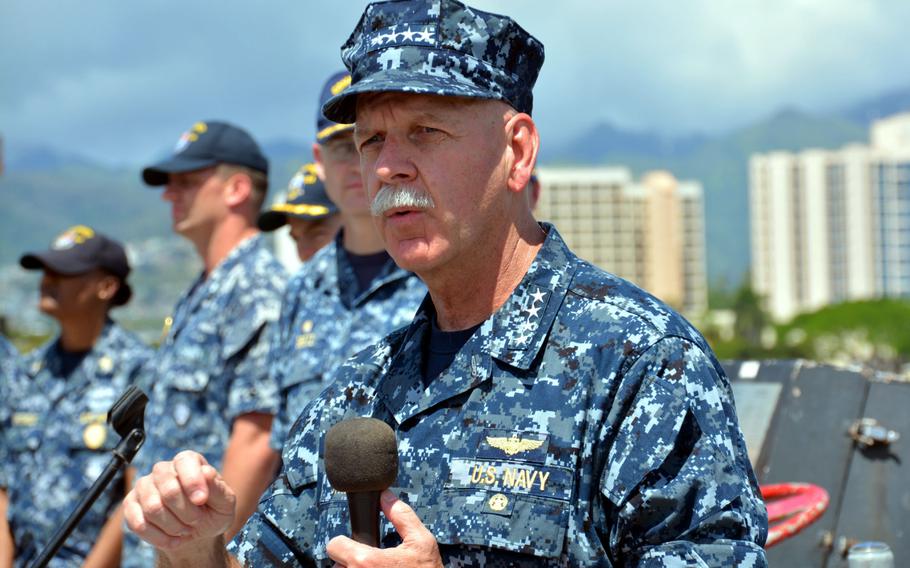 Adm. Scott Swift, commander of Pacific Fleet, talks to sailors during an all-hands call aboard the USS Sterett on April 12, 2017, at Joint Base Pearl Harbor-Hickam, Hawaii. (WYATT OLSON/STARS AND STRIPES)

FORT SHAFTER, Hawaii — The Navy’s top Pacific commander has opted to retire after learning he will not be tapped to lead U.S. Pacific Command.

Adm. Scott Swift, Pacific Fleet commander, said in a statement Monday that the chief of naval operations has informed him he will not succeed Adm. Harry Harris, who is slated to retire next year.

“In keeping with tradition and in loyalty to the Navy, I have submitted my request to retire,” Swift said.

A retirement date for Swift has not yet been requested, the statement added.

Commanders of Pacific Fleet, which oversees U.S. naval forces from California to India, are often nominated to head PACOM. Swift took command of the Pacific Fleet in May 2015 after Harris’ promotion.

Swift’s tenure included a string of accidents involving Navy ships in the Pacific.

In January, the USS Antietam ran aground and spilled roughly 1,100 gallons of hydraulic fluid into Tokyo Bay.

The commanders of 7th Fleet, Task Force 70 and Destroyer Squadron 15 were relieved after the collisions.

While Harris has been a fierce critic of China’s aspirations in the South China Sea, Swift often expressed the need for the U.S. and Chinese militaries to find common ground.

However, Swift made headlines in July when he was asked during a security conference in Australia whether he would launch nuclear missiles toward China if the president ordered him to do so.