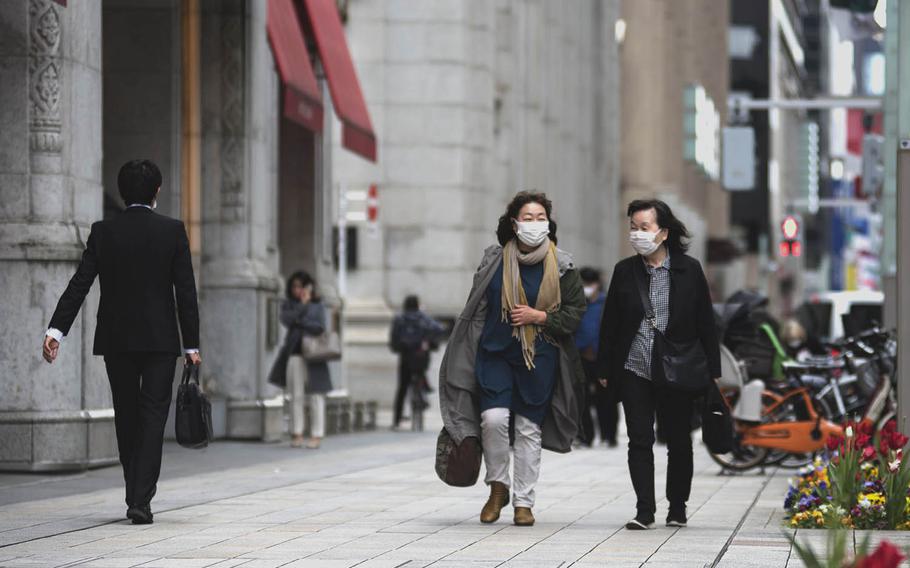 TOKYO – Another six people with the U.S. military in Japan and South Korea have contracted the coronavirus since April 22, according to reports as of 6 p.m. Wednesday.

In Japan, the spring coronavirus surge continued in the nation’s two largest metropolitan areas. Tokyo reported 925 people had tested positive for the coronavirus Wednesday, according to public broadcaster NHK. That’s the highest one-day tally since 1,025 on Jan. 28, according to metro government data.

Osaka prefecture, the second-largest metro area in Japan, reported 1,260 newly infected people and confirmed 14 deaths on Wednesday, according to NHK. That’s a new one-day high in the prefecture where the previous high was set at 1,242 on April 21, according to prefectural data.

Both metro areas are under emergency measures authorized by the national government until May 11 that include closure of malls, movie theaters, amusement parks and restaurants that serve alcohol. Trains and buses in Tokyo are running on reduced schedules. Employees are urged to telework.

Two were already quarantined after recently arriving in Japan, and the remaining two fell ill with COVID-19 symptoms and were immediately quarantined, according to the Army.

Marine Corps Air Station Iwakuni, 26 miles southwest of Hiroshima, had one new COVID-19 patient, according to a base Facebook post Wednesday. The individual, a recent arrival to the air station, came up positive on the test required to exit quarantine.

U.S. Forces Korea reported a soldier at Camp Humphreys, the largest U.S. installation in the country, tested positive for COVID-19 on Monday. The soldier was screened ahead of traveling outside South Korea and is now quarantined on base, according to a USFK news release.

South Korea, like Japan, is experiencing its highest new case numbers since January.

USFK, like its counterpart in Japan, is standing by to resume inoculating its population with the Johnson & Johnson vaccine, a command spokesman said by email Wednesday.

The Centers for Disease Control and Prevention and Food and Drug Administration on Friday recommended lifting the pause after reviewing those cases.

“We will strictly follow FDA, CDC and DOD guidance to include information on the rare risks of blood clots and low levels of platelets associated with this vaccine,” Peters said. “USFK has currently vaccinated 60% of our eligible population, and the resumption of issuing the J&J vaccine will increase our vaccinated population and protect our affiliated community, both USFK and [South Korea].”