On Okinawa, 41 new coronavirus cases for the Marines and one for the Air Force 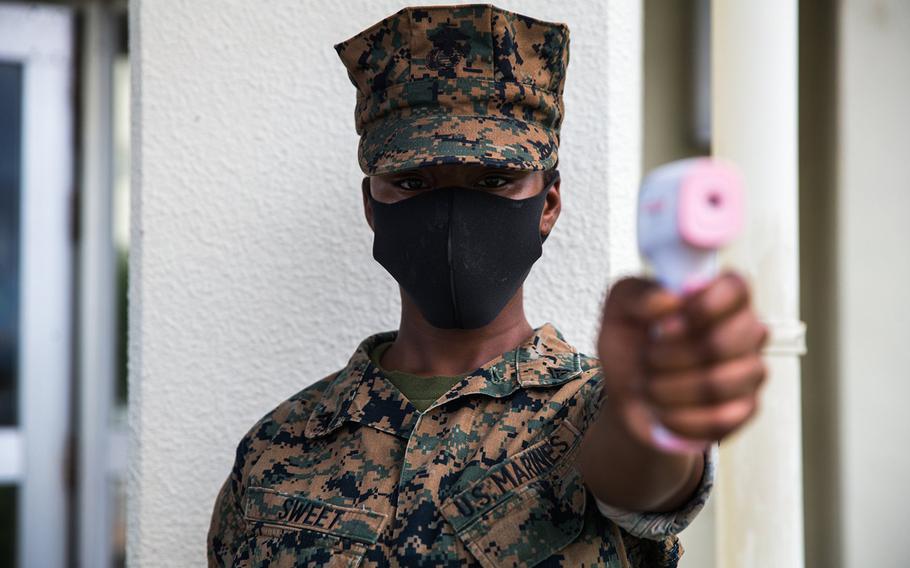 CAMP FOSTER, Okinawa – The Marine Corps on Okinawa reported 41 new cases of the coronavirus Friday, bringing to 196 the total from two clusters discovered after Fourth of July weekend.

The latest infections were discovered “within the last 24 hours” through the Marine Corps’ trace-and-test process and involve personnel attached to Marine Corps Installations Pacific and III Marine Expeditionary Force on Okinawa, spokesman Maj. Ken Kunze wrote Friday in an emailed statement to Stars and Stripes.

He did not specify whether the individuals were Marines, civilian employees, contractors or family members.

Twenty-seven of the 41 cases stem from a cluster outbreak at Marine Corps Air Station Futenma; the remaining 14 are at Camp Hansen, the site of another outbreak.

The 18th Wing at Kadena Air Base also announced a new positive case Friday afternoon, according to a post on the base Facebook page. The individual tested positive before leaving the 14-day quarantine period mandated upon arrival on Okinawa and had no contact with anyone on or off base, the message said.

The Kadena case was identified through a “recently implemented” mandate to test all service members, civilian employees, contractors and family members before they are permitted to exit quarantine, according to the wing statement on Facebook. The wing also completed contact tracing for that individual.

On Friday, U.S. Forces Japan announced a new policy requiring anyone in the mandated quarantine period to test negative for the coronavirus before they’re permitted to leave quarantine. That policy applies to all U.S. bases in Japan.

Of the 41 Marines, some have been in quarantine since July 12, but most have been restricted since July 18, the Marine Corps statement said. They have been moved into isolation.

Kunze said restrictions under Health Protection Condition-Charlie will remain in place through the weekend as part of the service’s "aggressive containment effort." Charlie represents a substantial risk of coronavirus transmission.

Another five Marines infected during the outbreak were released from isolation, according to the Marines on Friday. They join 27 others released earlier in the week.

To date, the Marines have reported 109 cases at MCAS Futenma and 87 at Camp Hansen.

The Marine statement Friday from Kunze implored members of the service to "diligently adhere to strict hygiene recommendations," maintain social distance and always wear a mask.

Prefectural officials were not available to comment Thursday and Friday due to a Japanese holiday. Ten new cases were reported in the Okinawa community Friday, according to the Ryukyu Shimpo newspaper, raising to 172 the number of coronavirus cases in the local community since the pandemic was declared.

Since July, the prefecture has reported 29 infections, the majority of which were traced to visits to Japan’s main islands.