On attack’s 79th anniversary, Pearl Harbor dead are remembered with no WWII vets in attendance In this Dec. 7, 1941 file photo, a small boat rescues a USS West Virginia crew member from the water after the Japanese bombing of Pearl Harbor, Hawaii. (AP)

In this Dec. 7, 1941 file photo, a small boat rescues a USS West Virginia crew member from the water after the Japanese bombing of Pearl Harbor, Hawaii. (AP) 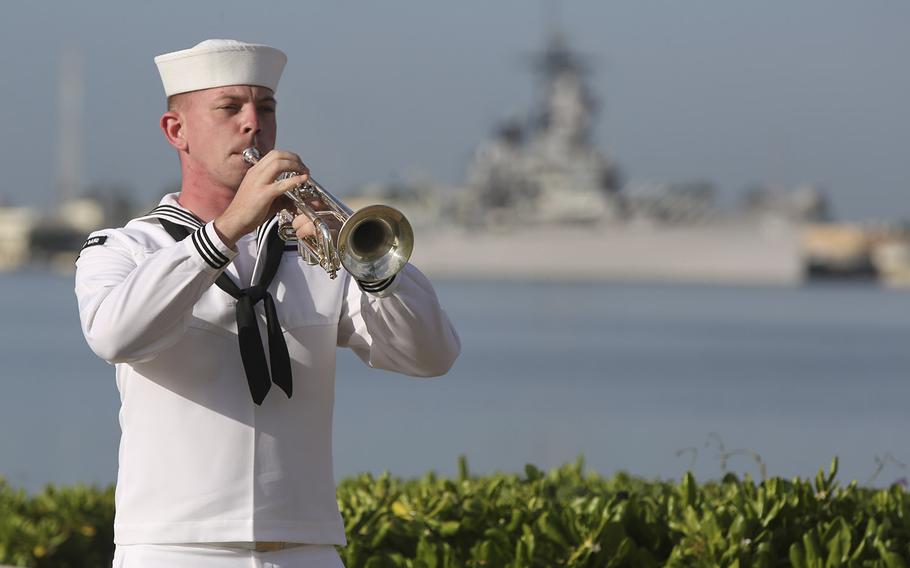 A U.S. Navy sailor plays taps in front of the USS Missouri during a ceremony to mark the anniversary of the attack on Pearl Harbor, Monday, Dec. 7, 2020, in Pearl Harbor, Hawaii. (Caleb Jones/AP)

FORT SHAFTER, Hawaii — For the small group of still-living veterans who survived the Japanese surprise attack of Dec. 7, 1941, the coronavirus pandemic did what extreme old age had failed to do.

For the first time, no World War II veteran attended the annual commemoration of the attack held Monday at the Pearl Harbor Visitor Center in Honolulu. Only a handful of officials and service members were on hand to conduct the livestreamed memorial marking 79 years since the attack took place.

The event is normally attended by more than a dozen veterans who survived the attack, and even more veterans of the war.

“To that warrior community that we fondly refer to as the Greatest Generation, while you are not here physically, I can assure you, you are here in our hearts, in our thoughts and in our gratitude,” said Rear Adm. Robert Chadwick, commander of Navy Region Hawaii, during the ceremony.

More than 2,300 people died in the surprise attack, during which Japanese planes struck all military bases on the island of Oahu, prompting America’s entrance into World War II.

At its end, 21 Navy vessels were destroyed or damaged — decimating Battleship Row — 200 aircraft were demolished and the island was left reeling.

The Navy lost 1,999 men, with roughly half of them dying aboard the USS Arizona, which still lies at the bottom of Pearl Harbor and has become the memorial to the lives lost that day. The Army lost more than 200 men.

Only two survivors of the Arizona remain living, Lou Conter and Ken Potts, who both turned 99 this year.

Conter rarely has missed attending the commemoration in recent years, and he appeared Monday in a prerecorded video.

“Today, I have the honor of introducing and remembering World War II veterans both past and present,” Conter said in the video

After the surprise attack, he fought on in the Pacific during World War II and retired from the Navy in 1967.

“But for thousands of people, the first day of the war was also the last day they saw of it,” he said. “The loss of those lives showed us what was at stake. At the same time, their courage ignited a spark that rallied Americans all across the country and redefined the meaning of service.”

All who fought that war shared one thing in common, he said.

“Dec. 7, 1941, changed our lives — not just for those of us on the USS Arizona or at Pearl Harbor, but throughout the United States,” he said. “It affected those of us who served as well as our families, our friends, our neighbors.”

Initial plans for the memorial called for a handful of local World War II veterans to attend the live ceremony, but that was dropped as coronavirus infections have continued unabated in Hawaii, with the state roughly average 90 new cases a day.

With no Dec. 7 veterans present in the audience, speakers focused more broadly on the role of World War II veterans and on 2020 marking the 75th anniversary of the end of the war when Japan officials signed the surrender agreement aboard the USS Missouri in September 1945.

“The veterans who couldn’t be with us today represent the greatest generation of all American history,” said Navy Lt. Cmdr. Mike Genta, master of ceremonies for the event. “No one before them and no one since has been asked to answer the call to serve and sacrifice in the way they were between the years of 1941 and 1945.”

“Today, a grateful nation reflects upon those who went above and beyond,” Adm. John Aquilino, commander of U.S. Pacific Fleet, said during the ceremony. “We honor their service; we remember their sacrifice; and we pledge to continue striving for a better and safer world.”