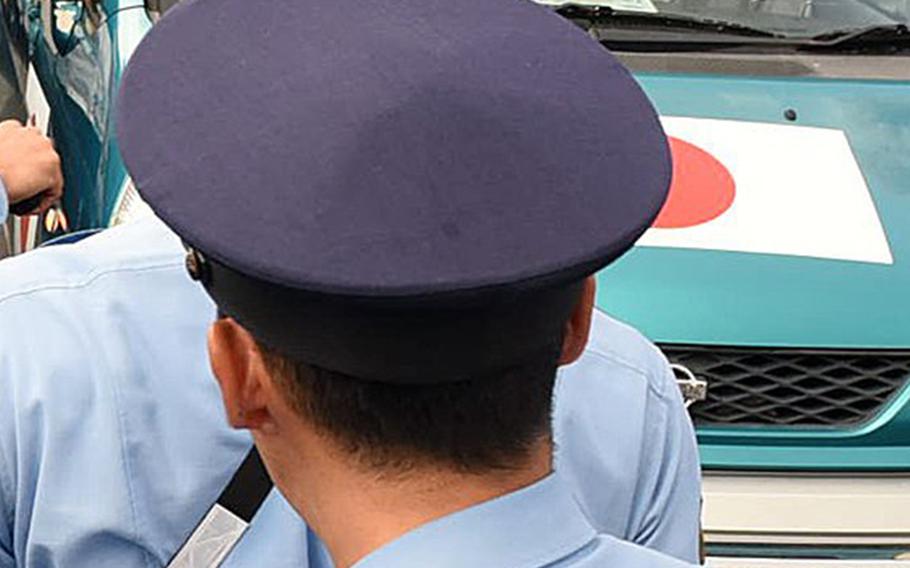 As about 1,500 people gathered in front of the Okinawan Prefectural Government offices in Naha to protest a security bill endorsed by Prime Minister Shinzo Abe, Japanese police officers surround ultra-right wing protesters who support Abe and were trying to gain attention by playing loud music and yelling through a loudspeaker around the protesters on July 31, 2015. (Tiffany Tompkins-Condie/McClatchy DC/TNS) (TNS)

CAMP FOSTER, Okinawa — Okinawa police are searching for a man who broke into the home of a Defense Department civilian worker early Sunday before beating and slashing her with what they think was a knife.

The incident happened in Chatan at about 2 a.m., when the woman, who is in her 40s, awoke to find an intruder standing inside her bedroom, an Okinawa police spokesman said. She called out to her son, who was in another room, prompting the man to punch her several times in the head before fleeing.

She received a cut on her left forearm that required stitches during the struggle, the spokesman said. Police believe she was slashed with a knife.

The victim described the intruder as approximately 5 feet 5 inches tall and wearing shorts but no shirt or shoes, the spokesman said. She said she had never seen the man before. Her son did not see the attacker.

Police declined to provide the man’s race or nationality.

Marine Corps officials on Okinawa did not immediately respond to requests seeking comment.

It was unclear Thursday what the victim does for the Defense Department or where she works on the island.

Police, who are trying to establish a motive for the attack, said similar incidents have not been reported in the area.burke.matt@stripes.comkusumoto.hana@stripes.com