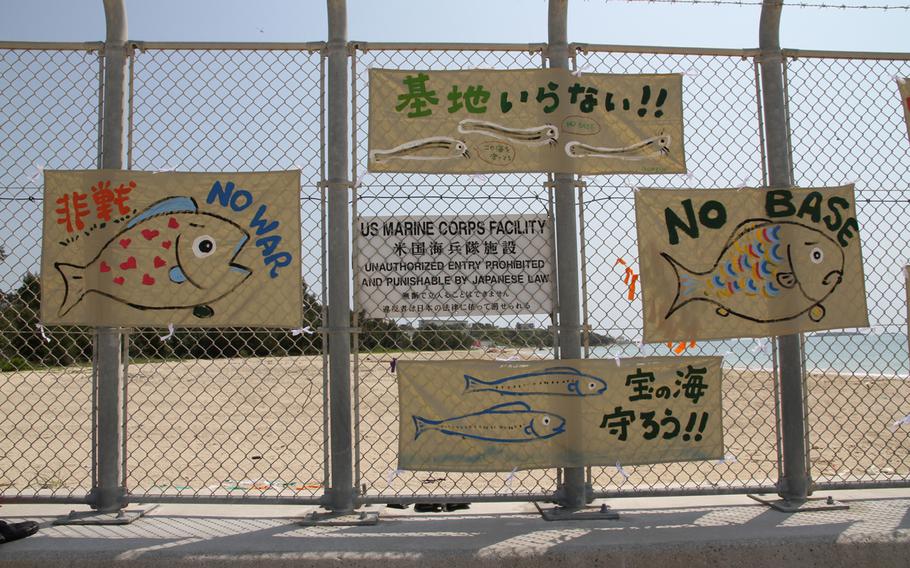 In this file photo from mid-April 2014, signs adorn a barbed-wire fence leading to Camp Schwab, Okinawa, during a protest commemorating the 10-year anniversary of the start of the 1st sit-in protest seeking to block the expansion of the base. (Matthew M. Burke/Stars and Stripes)

CAMP FOSTER, Okinawa — A protester was arrested at Camp Schwab after he allegedly hit a security guard in the face with a can of coffee during the latest protest against a new military runway in northern Okinawa.

Approximately 100 protesters were staging a rally at the main gate early Sunday in an attempt to block vehicles carrying construction materials from entering the base when police say Kobun Sasaki, 38, wandered away and approached a 26-year-old security guard at a nearby construction access gate.

The guard, hired by the Okinawa Defense Bureau, tried to block Sasaki, who was reportedly intoxicated, from entering the base and was struck several times in the face, according to a spokesman for the prefectural police in Nago.

The guard was not injured, the spokesman said.

Sasaki was arrested at 12:46 a.m., then released by the Naha District Public Prosecutor’s Office on Monday afternoon after the case was filed by police.

Peaceful protests have been held for a decade against the relocation of Marine Corps Air Station Futenma to Schwab in the north and a new runway into Oura Bay at Henoko.