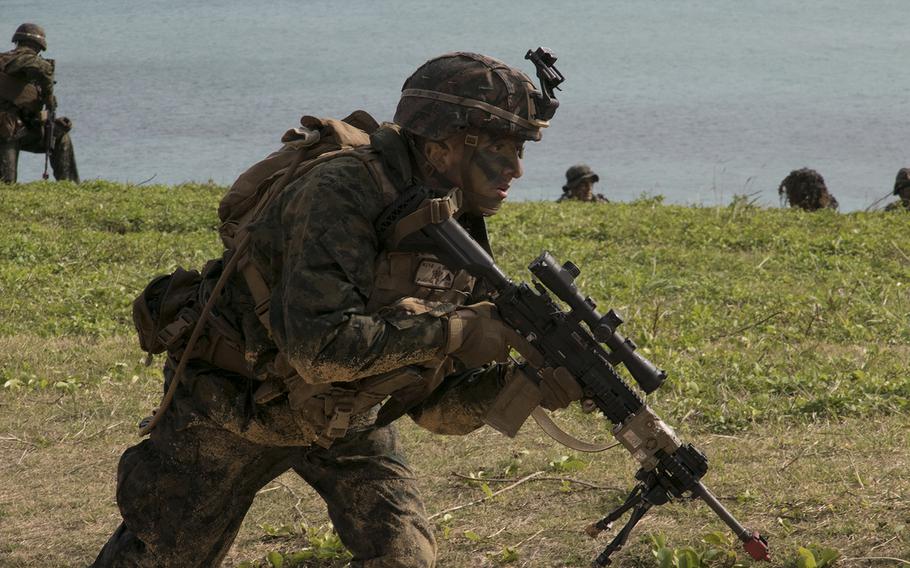 A Marine from the 31st Marine Expeditionary Unit takes part in a raid exercise in Kin, Okinawa, Feb. 9, 2020. (Matthew Burke/Stars and Stripes)

CAMP FOSTER, Okinawa — A panel set up by Okinawa Gov. Denny Tamaki to study U.S. military posture in his prefecture recently recommended that the Japanese government speed up the process of reducing the number of U.S. bases there and disperse Marines throughout the region.

The panel, which includes five security and U.S.-Japan relations experts, was set up in May and presented its findings to Tamaki on Thursday, a prefectural spokesman said.

With China improving its missile capabilities in recent years, the Marines have acknowledged the risk in concentrating their forces in one place, the panel said. It recommended deploying Marines in smaller groups throughout Asia, including to Japan Self-Defense Forces bases on the main islands of Japan.

The panel also urged the immediate closure of Marine Corps Air Station Futenma, which is in a densely packed urban area in central Okinawa.

Tamaki has said he would incorporate those recommendations into prefectural government policy.

The governor was elected in 2018 on a platform opposing the planned relocation of Marine air operations from Futenma to Camp Schwab on the island’s remote northeastern coast. A runway is being built there to facilitate that move.

The relocation is part of a larger Asia-Pacific realignment for the Marine Corps, which is years in the making and will see several thousand Marines sent to Guam, Hawaii, the U.S. mainland and a beefed up rotational force in Australia.