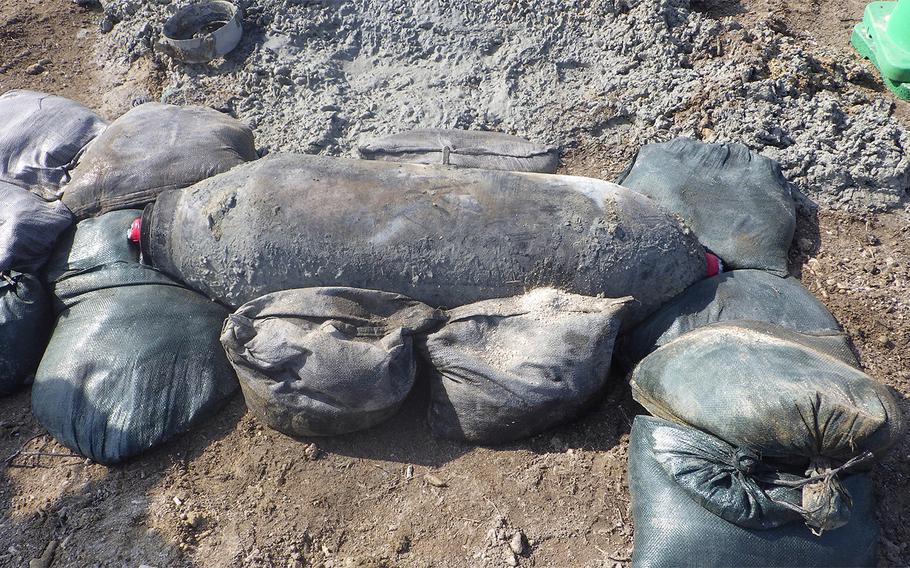 The 550-pound bomb — 4 feet long by about a foot in diameter — was discovered at approximately 2 a.m. Friday morning near the airport’s No. 1 runway, a spokeswoman for Naha city said Monday. Representatives from the Japan Ground Self-Defense Force responded to the scene and secured the ordnance with a plate.

The No. 1 runway, one of two at the airport, has been closed since the incident, a spokesman for the Naha Airport office of the Ministry of Land, Infrastructure, Transport and Tourism said. Two dozen flights have been delayed and 14 canceled, impacting over 500 passengers, thus far.

A taxiway between runways 1 and 2 was closed while JGSDF personnel worked on the bomb site until 9:30 a.m. Friday, the ministry spokesman said. That caused a temporary shutdown that grounded all flights about 2 ½ hours, he said. Some flights were canceled outright as a result, he said.

“It’s fortunate that we opened that second runway not long ago, so we didn’t have to close the airport completely,” the spokesman said. “The second runway is open, so it doesn’t affect our daily operation.”

It’s customary for some government officials in Japan to speak on the condition of anonymity.

The city of Naha is coordinating with the JGSDF, local police and Naha Airport to schedule a date for removal, the spokeswoman said. She could not estimate a date for reopening the No. 1 runway.

On average, the JGSDF 15th Brigade disposes of approximately 600 bombs annually, according to their website. To date, they have disposed of 38,061 total bombs.