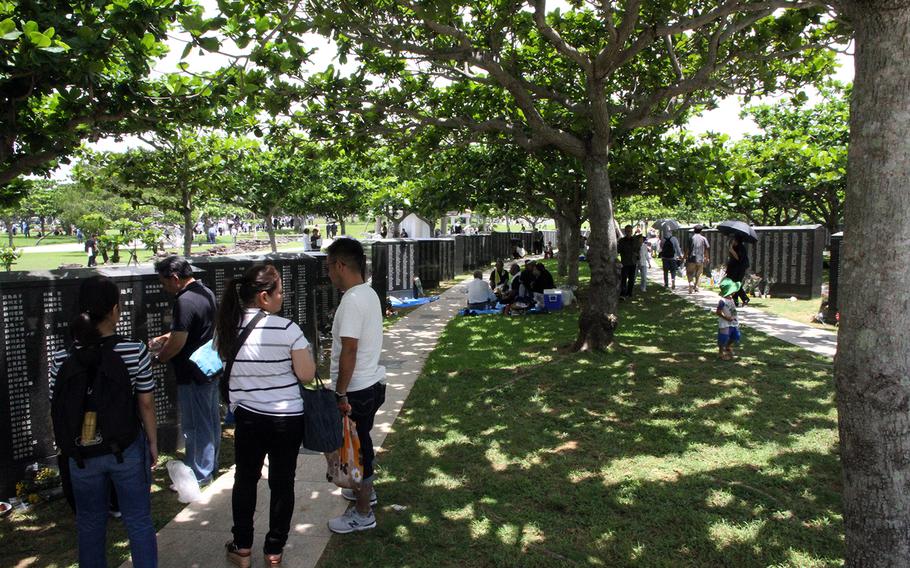 Buy Photo
People visit the Cornerstone of Peace memorial during the Irei no Hi ceremony at Peace Memorial Park in Okinawa, Japan, June 23, 2018. The memorial lists the names of those who died in the Battle of Okinawa during World War II. (Matt Burke/Stars and Stripes)

CAMP FOSTER, Okinawa — The more than 5,000 annual attendees of Okinawa prefecture’s Irei no Hi ceremony to mark the anniversary of the Battle of Okinawa have been told to pray from home this year due to concerns over the coronavirus.

The 75th anniversary ceremony, which was slated for June 23 at the Okinawa Peace Memorial Park in Itoman city, is not being canceled but only 16 prefectural officials are expected to attend, among them Okinawa Gov. Denny Tamaki, his vice governors and the chief of the prefectural assembly, a spokeswoman for Tamaki said Friday.

“Due to the coronavirus concerns and health risks, we did not ask guests from outside of Okinawa to attend this year,” the spokeswoman said. “We would like ask everyone to pray at home.”

Peace Memorial Park will remain open during the ceremony, the spokeswoman said. To discourage people from attending, Okinawa will not be offering a free shuttle bus to the site as it has in previous years. There will also be limited parking.

If people still feel they must visit the park and its zig-zagging Cornerstone of Peace memorial that lists the names of all the war dead on both sides, they are being asked to observe social distancing and proper hygiene protocols, the spokeswoman said.

“If the coronavirus situation changes, we may have to close the park once again,” the spokeswoman said.

The battle rendered large swaths of Okinawa a scorched hellscape, more closely resembling the surface of the moon than the idyllic tropical paradise it is today. Echoes of the battle reverberate in the island’s passionate anti-war movement.

For the Allies, the battle was pivotal. With airfields near the Japanese mainland, troops could begin their final assault on the Japanese homeland that would end World War II. The war ended several months after the Battle of Okinawa.