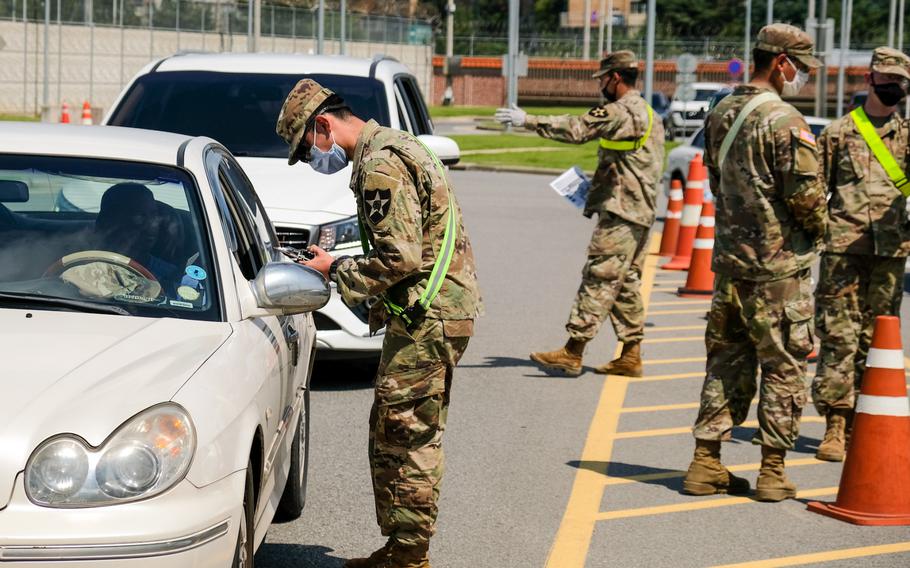 SEOUL, South Korea — Three U.S. service members and a contractor tested positive for the coronavirus after traveling to South Korea from the United States, the military said Thursday, raising to 180 the total number of cases affiliated with U.S. Forces Korea.

South Korea, meanwhile, reported 155 new confirmed cases, keeping the daily toll under 200 for more than a week amid tightened restrictions aimed at containing a new outbreak that began in Seoul and surrounding areas last month.

USFK has reported only 25 confirmed cases among people living in South Korea, including two soldiers. The rest have been travelers flying to the divided peninsula for new assignments or returning from trips abroad.

Two affected troops arrived at Osan Air Base on U.S. government-chartered flights on Aug. 23 and Sept. 7, while one service member and a contractor arrived at Incheon International Airport on commercial flights on Sept. 3 and 4, according to a press release.

USFK insisted the patients posed no danger to the broader community because of a strict testing and quarantine process required for all personnel who travel to the peninsula from abroad. “None of the new arrivals have interacted with anyone residing within USFK installations or the local community,” it said.

On Aug. 28, the Army also began requiring soldiers and family members to test negative for the coronavirus before boarding international flights. USFK didn’t say if that applied to any of the latest cases.

“Only one of the confirmed positives was a newly arrived soldier and was required to have a negative test; he did not have a test,” USFK spokesman Col. Lee Peters said in response to a question.

Peters said the command can’t control what soldiers do before traveling to South Korea, but “we can control every new arrival — regardless of service or affiliation — and ensure all adhere to our USFK directives."

Three of them tested positive on the first mandatory test before entering a two-week quarantine; the other tested positive on a second test required to exit the quarantine, it said, adding that all transportation and facilities that had been used by the individuals had been thoroughly cleaned.

All four also were transferred to isolation facilities at Camp Humphreys or Osan Air Base, according to USFK.

The military has raised its alert level to Charlie, which means there’s a substantial risk of infection, and re-imposed safeguards including health checks at entry gates, limited access and a ban on nonessential travel and many recreational activities off-base.

South Korea seemed to have the virus largely under control after an initial outbreak that began in late February, but numbers began spiking again last month as health officials struggled to keep up with clusters of infections in the densely populated Seoul metropolitan area.

Authorities imposed mask mandates in many cities, restricted the hours that diners are allowed to eat in at restaurants and ordered franchise coffee houses and bakeries to offer take-out only. This week, the Seoul metropolitan government also began restricting access to riverside parks and popular picnic areas.

The new cases reported by the Korea Centers for Disease Control and Prevention raised South Korea’s total to 21,743. Two more people died, pushing the death toll to 346. That’s up from 305 before the latest outbreak began, but the fatality rate remained about 1.6%. 17,360 patients have fully recovered and been released, the KCDC said Thursday.