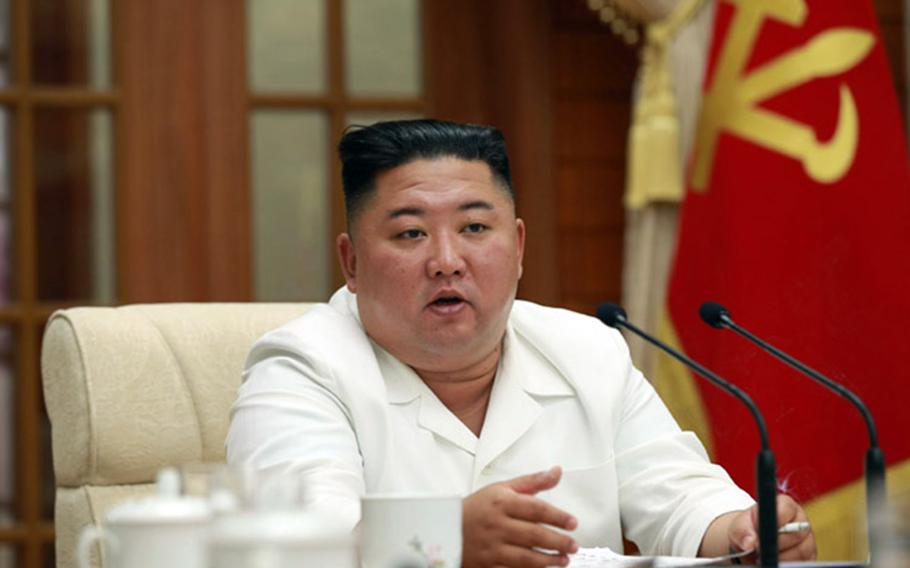 SEOUL, South Korea — Turning his focus inward, North Korean leader Kim Jong Un expressed concern about “defects” in the nation’s coronavirus response and the need for strong emergency measures as a strong typhoon barreled toward the peninsula, according to North Korea’s state-run media.

Kim spoke as he presided over a meeting on Tuesday of the political bureau of the ruling Workers’ Party’s central committee, the Korean Central News Agency reported Wednesday.

He outlined “some shortcomings” in efforts to fight the coronavirus and “underlined the need to take active measures involving the entire party and society for completing and maintaining the anti-epidemic posture and eliminating some defects,” KCNA said.

He also was quoted as saying measures to prevent casualties and minimize the damage to crops from the typhoon were “important work which can never be neglected even for a moment” since they could determine “whether we would successfully wrap on this year’s farming or not.”

Typhoon Bavi, one of the most powerful storms this year, was expected to impact both Koreas, although forecasters said Wednesday evening that it was edging farther west of the peninsula than anticipated. It follows weeks of torrential rains that caused massive damage on the divided peninsula.

Kim, a third-generation leader who is better known to the international community for presiding over nuclear and missile tests, previously visited a flood-hit area and instructed officials to release grain from his special stock to help the flood victims.

The focus on domestic issues comes as nuclear talks with the United States and efforts to improve inter-Korean relations have stalled.

Kim appears to be trying to shore up internal support amid economic woes stemming from coronavirus restrictions and weather problems on top of U.S.-led sanctions, experts said.

The ruling party also recently scheduled a rare congress in January to set development goals for the next five years. The meeting would follow the 2016 agenda-setting congress, which was the first in 36 years.

Leif-Eric Easley, a professor at Ewha University in Seoul, said Kim is essentially admitting that the current economic plan has failed.

“Kim pins blame on external factors like sanctions and the pandemic, but also demands internal adjustments,” Easley wrote in an email Wednesday.

“Given North Korea’s refusal to denuclearize, diplomacy appears on hold for now. With the U.S. election approaching, a major weapons test would be risky,” he said. “So, at the moment, holding party meetings and promising plans is the safest way the North Korean leader can show he is taking action.”

North Korea, which sealed its borders after the virus first appeared late last year in China, has not acknowledged having any coronavirus cases, but many are skeptical that it has escaped the global pandemic.

The lockdown also hampered trade with China, its main ally, and Kim rejected an offer of aid from the South.

The North also briefly closed the city of Kaesong, due north of the heavily fortified border that divides the peninsula, after it said a defector who crossed back from the South had displayed symptoms of the respiratory disease caused by the virus.