North Korean ICBM appears to have broken up during re-entry, think tank says 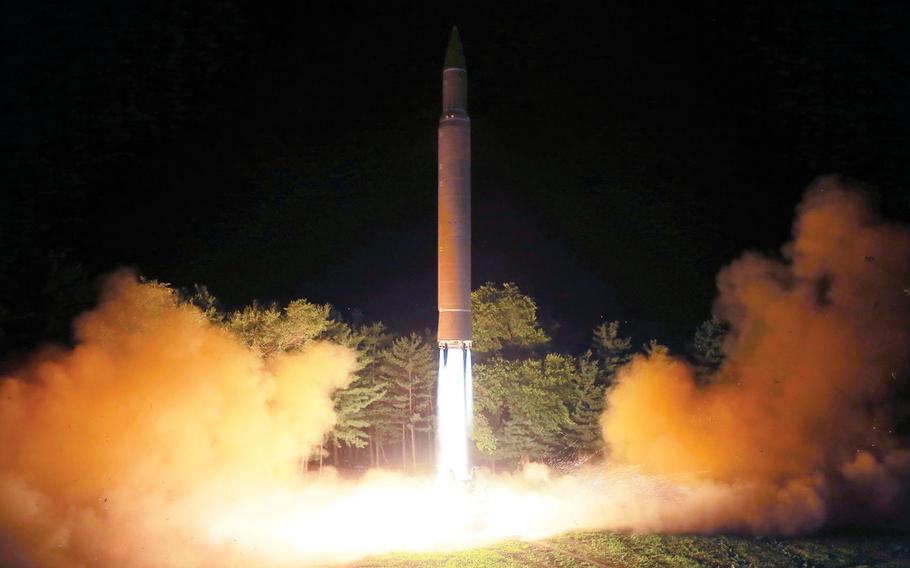 This Friday, July 28, 2017, photo distributed by the North Korean government on Saturday, July 29, 2017, shows what was said to be the launch of a Hwasong-14 intercontinental ballistic missile at an undisclosed location in North Korea. (Korean Central News Agency/Korea News Service)

The footage — caught by a weather camera owned by Japanese broadcaster NHK not far from where the ICBM splashed down off Hokkaido — shows the re-entry vehicle “shedding small radiant objects” before dimming and disappearing at an altitude of 2.5 to 3 miles, said North Korean monitoring website 38 North.

“Had the [re-entry vehicle] survived the rigors of re-entry, it would have continued to glow,” said the report written by Michael Elleman of the International Institute for Strategic Studies.

Based on the video evidence, he said, a “reasonable conclusion” is that the ICBM’s re-entry vehicle did not survive the test.

Kim expressed “great satisfaction” after the Hwasong-14 missile -- the second ICBM North Korea had tested in July -- reached its maximum altitude of 2,314 miles after being fired late Friday, said a statement released Saturday by the Korean Central News Agency. He also boasted that the test demonstrated Pyongyang’s ability to conduct a surprise ICBM attack from any place and at any time and proved that the regime’s missiles can now reach “all across the continental U.S.”

However, the missile’s reliability remains an “outstanding question,” said the 38 North report, which added that future tests must show that Pyongyang’s missiles are more likely to reach the U.S. mainland than they are to fail.

“This could be easily carried by the Hwasong-14, though to reach the U.S. mainland, a lighter-weight bomb may be required,” the report said.