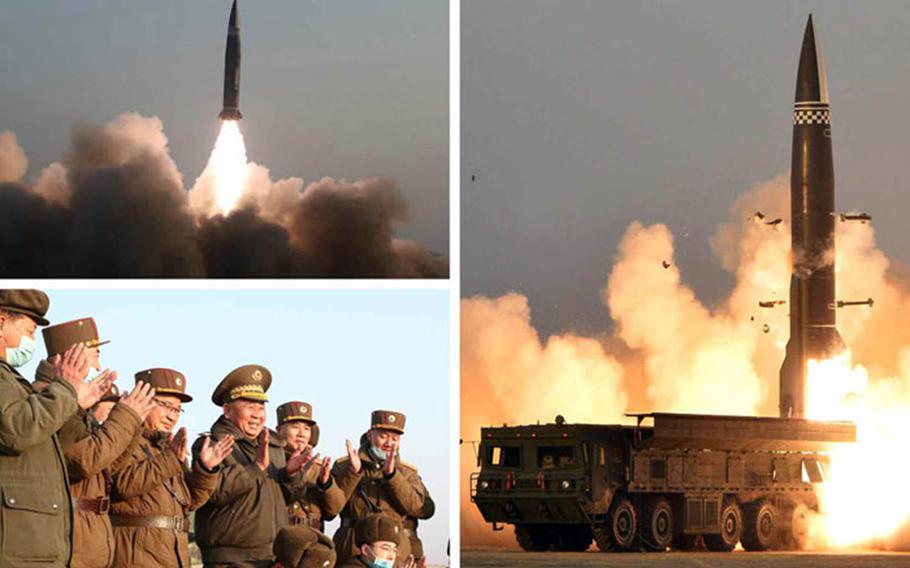 North Korea announced it fired a pair of guided missiles Thursday — the nation’s first ballistic missile launches in a year.

The test of a “newly-developed, new type” of missile was announced Friday by Pyongyang’s Korean Central News Agency. A day earlier, South Korea, the United States and Japan confirmed the launches, which officials said were ballistic missiles.

“The newly-developed, new-type tactical guided missiles are a weapon system which improved the weight of its warhead to 2.5 tons while using the core technology of the already-developed one,” KCNA reported.

North Korea’s Academy of Defense Science, which conducted the launch, said it was "very successful just as it had been confidently predicted," according to KCNA.

The missiles “correctly hit the target set in the 600-kilometre waters on the East Sea of Korea,” the agency reported, using the Korean name for waters also known as the Sea of Japan.

“Through several times’ static firing test of motor and test-firing, we have confirmed the reliability of the improved solid-fuel motor and also reconfirmed the irregular orbit characteristics of the low-altitude gliding and skipping flight mode which has already been applied to other guided missiles,” the academy said, according to KCNA.

The test was guided by a senior communist official, Ri Pyong Chol, the agency said.

“The development of this weapon system is of great significance in strengthening our military power and arresting all sorts of military threats existing on the Korean peninsula,” Choi said, according to the agency.

The launches come less than a week after Pyongyang fired multiple short-range missiles in the wake of a visit to Seoul by Secretary of State Antony Blinken and Defense Secretary Lloyd Austin.

At his first formal news conference Thursday, President Joe Biden said of the missile tests: “There will be responses if they choose to escalate. We will respond accordingly but I’m also prepared for some form of diplomacy with North Korean leader Kim Jong Un, but it has to be conditioned upon the end result of denuclearization."

The tests are a violation of United Nations sanctions, which ban the North from developing ballistic missiles.

The administration of former President Donald Trump had turned a blind eye to “minor violations” of the sanctions, said former Air Force officer Ralph Cossa, who now serves as president emeritus of the Pacific Forum think tank in Honolulu.

Cossa, in an email Friday to Stars and Stripes, questioned how the Biden administration will respond.

Without a serious response, North Korea will conduct longer-range tests, he predicted. If there is a serious response, Pyongyang will use it as an excuse to conduct further testing, eventually leading to the launch of an intercontinental ballistic missile, Cossa said.

“Either way, more provocations (annoying actions) are coming,” he wrote. “Nonetheless, failure to respond tells them they can get away with such violations all the time.”