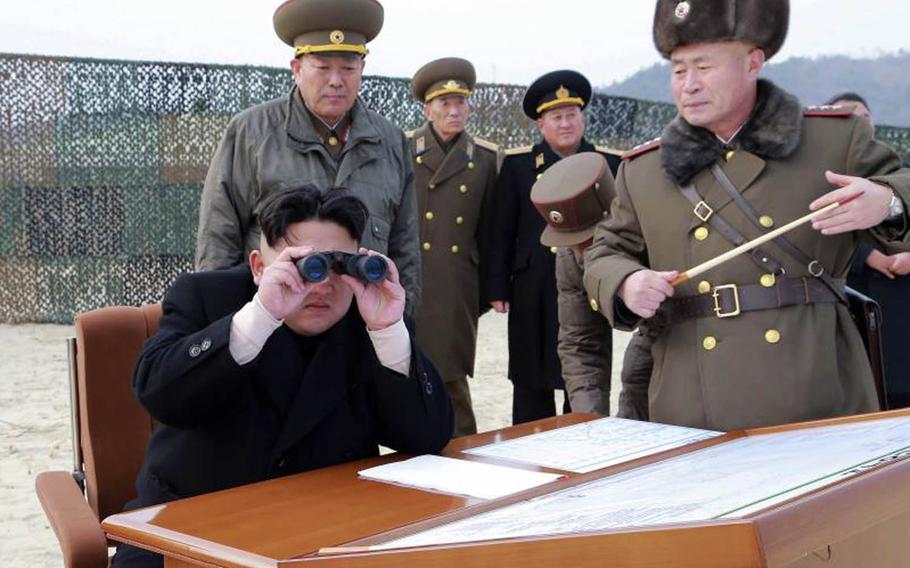 SEOUL, South Korea — North Korea said it successfully tested a powerful new rocket engine this weekend, signaling defiance as the U.S. secretary of state wrapped up his first official trip to the region.

It quoted him as declaring “a new birth of the Juche-based rocket industry,” and hinted the engine could be used in a long-range missile.

Juche, or self-reliance, refers to the communist state’s official ideology.

The test coincided with Secretary of State Rex Tillerson’s trip to Beijing, the final stop on his first official tour of the region, which included stops in South Korea and Japan.

Tillerson said the administration is considering all options, including military action, as it develops a new strategy to deal with the communist state’s nuclear-weapons program.

“Certainly, we do not want things to get to a military conflict,” he said during a joint press conference with his South Korean counterpart.

“But obviously, if North Korea takes actions that threatens the South Korean forces or our own forces, then that would be met with an appropriate response," he added. "If they elevate the threat of their weapons program to a level that we believe that requires action, that option is on the table.”

Tillerson also ruled out a return to negotiations, at least for the time being.

President Donald Trump has repeatedly called on China, a traditional ally of North Korea, to do more to rein in its communist protégé.

On Friday, Trump tweeted “North Korea is behaving very badly. They have been ‘playing’ the United States for years. China has done little to help!”

Beijing, which has shown growing impatience over North Korea’s defiance, insists it has done what it can, including signing onto U.N. Security Council sanctions aimed at punishing Pyongyang.

It also suspended coal imports from the North last month. But China fears the possibility of a North Korean regime collapse, which could lead to a refugee crisis.

Beijing also considers North Korea a buffer between its territory and the presence of nearly 30,000 U.S. forces stationed in South Korea.

Chinese Foreign Minister Wang Yi has urged Washington and Pyongyang to show restraint, comparing the two sides to “two accelerating trains coming towards each other.”

Tillerson met with Yi on Saturday and Chinese President Xi Jinping on Sunday before heading home.

North Korea has emerged as a top security challenge as its reclusive leadership has stepped up efforts to develop a nuclear-tipped missile that could reach the U.S. mainland, although experts are divided on how close the country is to reaching that goal.

It also has expressed anger over annual U.S.-South Korean war games, which are underway on the divided peninsula.

The “Korean-style” engine was developed by the Academy of the National Defense Science, KCNA said.

“The results of the test confirmed the stable maintenance of technical indices of all systems such as starting and stopping features,” it said.

The report stressed the engine was made with North Korean technology.

KCNA also said the engine would help the country develop “world-level” satellite delivery capabilities, indicating it could potentially be used in a long-range missile.

Kim Jong Un “noted that the success made in the current test marked a great event of historic significance as it declared a new birth of the Juche-based rocket industry,” the report said.

“He emphasized that the whole world will soon witness what eventful significance the great victory won today carries,” it added.

The report did not give a date but said the test occurred at dawn and called it “a historic day which can be called ‘March 18 revolution,’ suggesting it occurred on Saturday.

North Korea claims its satellite program is part of a peaceful space program, but the U.S. and its allies allege it’s a cover for a banned ballistic-missile program.

The 38 North website reported Friday that recent satellite imagery suggests the simultaneous launch of four advanced Scud missiles on March 6 occurred outside the Sohae facility’s entrance, along the main access road from Tongchang-ri.

The environmental cover had been moved to the vertical test stand “either for maintenance or preparation for a new rocket engine test,” said the website, which is run by the U.S.-Korea Institute at Johns Hopkins University.