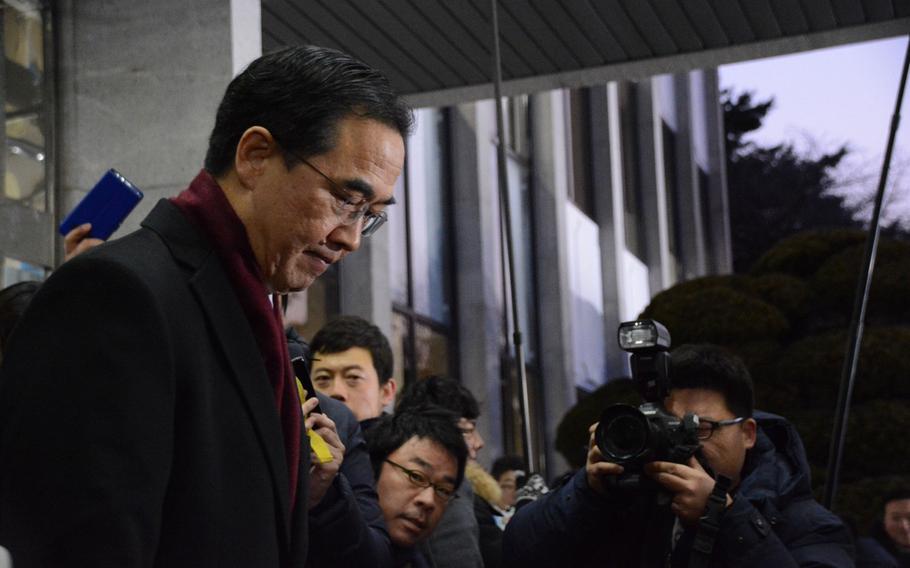 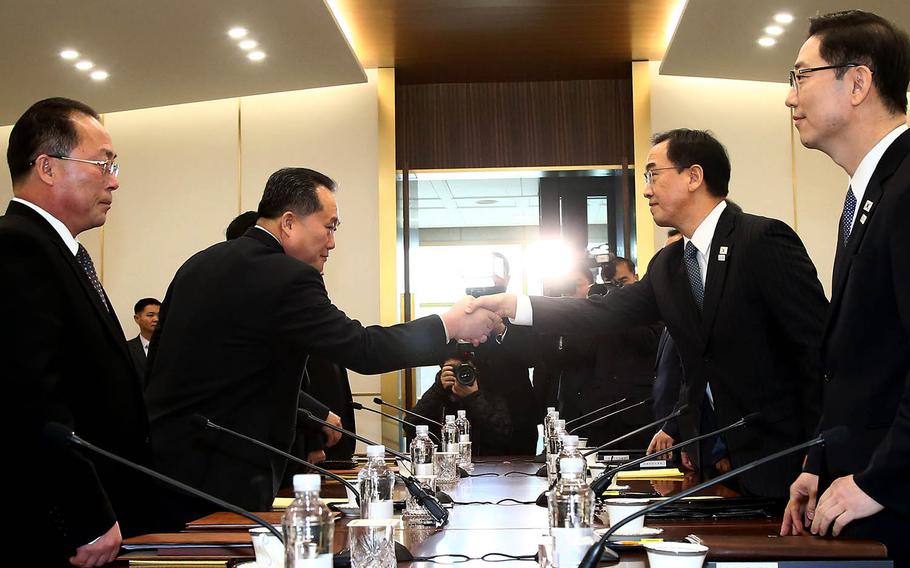 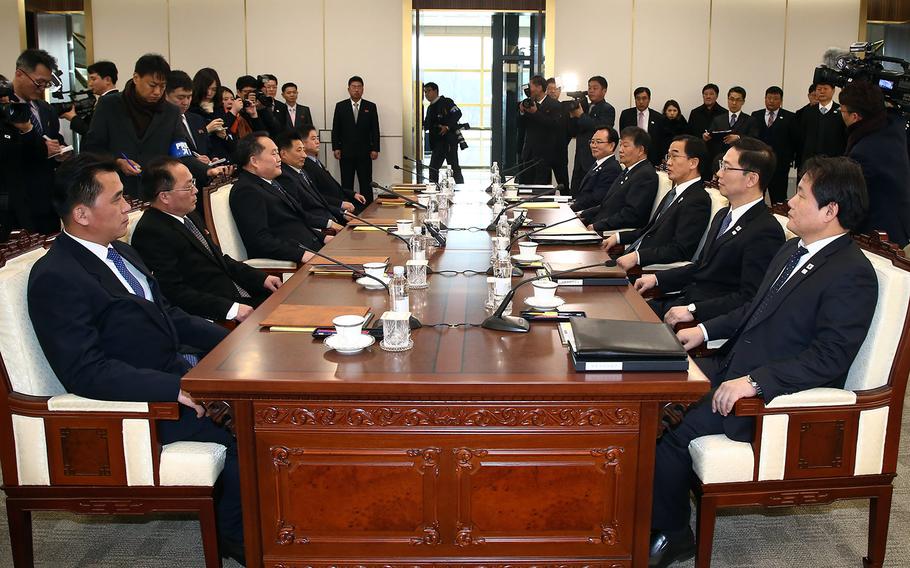 Members of the North Korean delegation, left, sit across from South Korean officials during the first high-level talks between the two countries in more than two years, Tuesday, Jan. 9, 2017. The meeting took place in the truce village of Panmunjom. (Courtesy of South Korea's Unification Ministry) 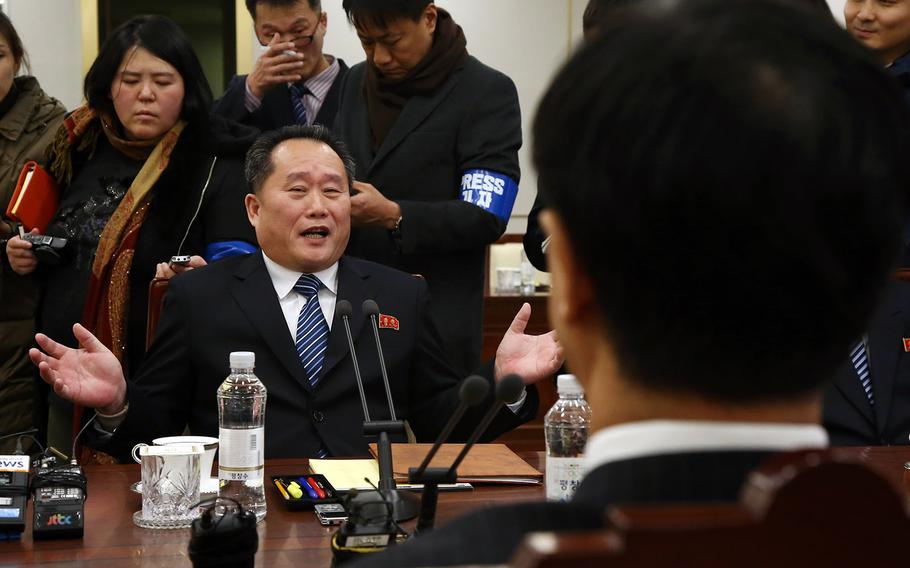 SEOUL, South Korea — North Korea agreed Tuesday to send athletes and officials to next month’s Winter Olympics in the South and to discuss easing military hostilities in a diplomatic breakthrough following months of heightened tensions over the North’s fast-moving nuclear and ballistic missile programs.

The breakthrough occurred during a meeting between the two Koreas in the truce village of Panmunjom after the North Korean delegation walked across the Military Demarcation Line that has divided the peninsula since the end of the 1950-53 Korean War.

Seoul also said separately that it may consider temporarily lifting economic sanctions aimed at punishing the North for its nuclear weapons program to facilitate the participation in the Winter Games. It would be the first time North Korea has taken part in the Winter Olympics in eight years.

North Korea’s chief delegate, Ri Son Gwon, shook hands with his South Korean counterpart, Unification Minister Cho Myoung-gyon, before a plenary session began with five officials from each side facing each other across a long, wooden table.

The delegates broke for lunch, then continued meeting into the evening before issuing a joint jointstatement that went further than many had anticipated by including an agreement to hold more talks on issues beyond the Olympics.

“I think we should be engaged in these talks in an earnest, sincere manner to give a New Year’s first gift and precious results to the Korean people,” Ri said at the start of the talks, according to a pool report.

A smiling Ri – a veteran negotiator and the head of the state agency that handles affairs with the South – proposed that the meeting be opened to the media, but Cho rebuffed the idea.

The main item on the agenda was the possibility that the North will participate in the Feb. 9-25 Olympics, which will be held in the South Korean resort town of Pyeongchang – just 50 miles from the heavily fortified border.

But South Korea expressed a desire to use the opportunity to put the two sides on the path to improved relations. The meeting was limited to the Koreas but was closely watched by the United States and other countries as a test for possible wider engagement with Pyongyang.

South Korean President Moon Jae-in and North Korean leader Kim Jong Un were reportedly able to monitor the talks in real time, with a hotline at their disposal to intervene if necessary.

North Korea has used past negotiations to wrangle concessions and aid from the West, and critics warned that Pyongyang may be trying to drive a wedge between Seoul and Washington in a bid to ease sanctions and other international pressure.

But the meeting was a victory for Moon, who has pressed for a peaceful resolution to the nuclear crisis and sought North Korean participation in the Olympics to aid that effort and alleviate security concerns.

Cho reflected those hopes, telling reporters before leaving for the Demilitarized Zone that “we will try to make the Pyeongchang Games and the Paralympics a peace festival and hope it will serve as the first step toward an improvement in inter-Korean ties.”

Seoul, meanwhile, proposed that the two Koreas conduct a joint march during the opening and closing Olympic ceremonies, according to Chun.

The International Olympic Committee said Monday that it has “kept the door open” for North Korea to participate by extending the registration deadline and offering support for the country’s athletes.

That would resurrect the Olympic dreams of North Korean figure skaters Ryom Tae Ok and Kim Ju Sik. The pair had qualified in September but the North’s National Olympic Committee missed the deadline to register in October.

North Korea also said it restored another military hotline that had been suspended with the South, the second such reopening in a week. The communication channels had been suspended as hostilities over the North’s nuclear program flared.

A joint statement issued after the talks confirmed the agreement. It also said the North had agreed to further talks to hammer out the details about its Olympic participation as well as South Korea’s proposal to hold military talks to reduce tensions.

The statement did not, however, mention South Korea’s proposal to resume reunions of families left divided by the war in time for the Lunar New Year holiday next month.

The South Koreans called for a resumption of negotiations over the North’s nuclear program but received no specific response, Chun said. However, he stressed that the North Korean officials said they wanted to promote reconciliation between the two countries through dialogue.

Foreign ministry spokesman Noh Kyu-duk also told reporters that the South may consider a measure temporarily lifting sanctions against the North if necessary to enable its Olympic participation, but only in close coordination with the United States and other countries.

The high-profile meeting came after more than two years of crisis over North Korea’s nuclear weapons progress, beginning with the communist state’s fourth nuclear test in January 2016. The North has since conducted two other nuclear tests and test-fired dozens of missiles, most recently an ICBM on Nov. 29.

President Donald Trump has engaged in a war of words with Pyongyang that many fear has pushed the peninsula to the brink of conflict.

The State Department said Tuesday’s talks were a good start to defusing tensions but it’s too soon to know if there will be meaning beyond the Olympic preparations.

Brian Hook, a chief adviser to Secretary of State Rex Tillerson, told reporters in a conference call that sanctions would continue until the U.S. goal of “complete, verifiable, irreversible denuclearization of the Korean Peninsula” was achieved. Hook said Trump believes his pressure campaign was responsible for persuading the North to agree to the renewed dialogue, according to The Associated Press.

Kim Jong Un said in his New Year's Day address that he was willing to send a delegation to the Olympics.

At the same time he warned the U.S. that a nuclear button sits on his desk. That prompted Trump to boast that his nuclear button is “much bigger and more powerful.”

But Moon proposed holding talks, and Pyongyang accepted the offer last week after Seoul and Washington agreed to postpone joint war games until after the March 8-18 Paralympics.

Trump appeared to soften his tone, saying over the weekend that he would be willing to speak by phone with the North Korean leader. But the U.S. administration insisted it was not relaxing its goal of denuclearization.

The last formal talks between the two Koreas were held in December 2015.

Panmunjom is the only point in the DMZ where troops from the two sides come face to face. It was also the site of a dramatic defection of a North Korean soldier who fled to the South under a barrage of gunfire by his former comrades last year.