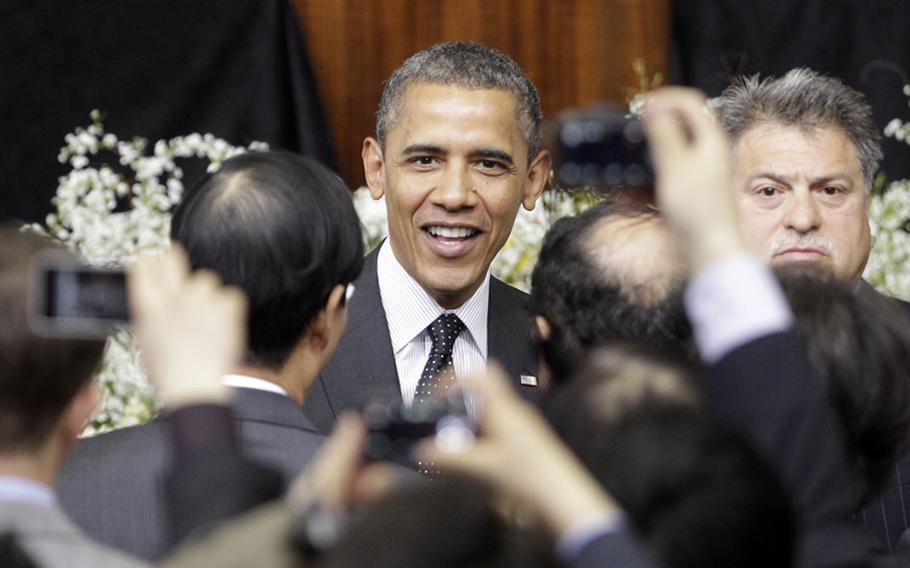 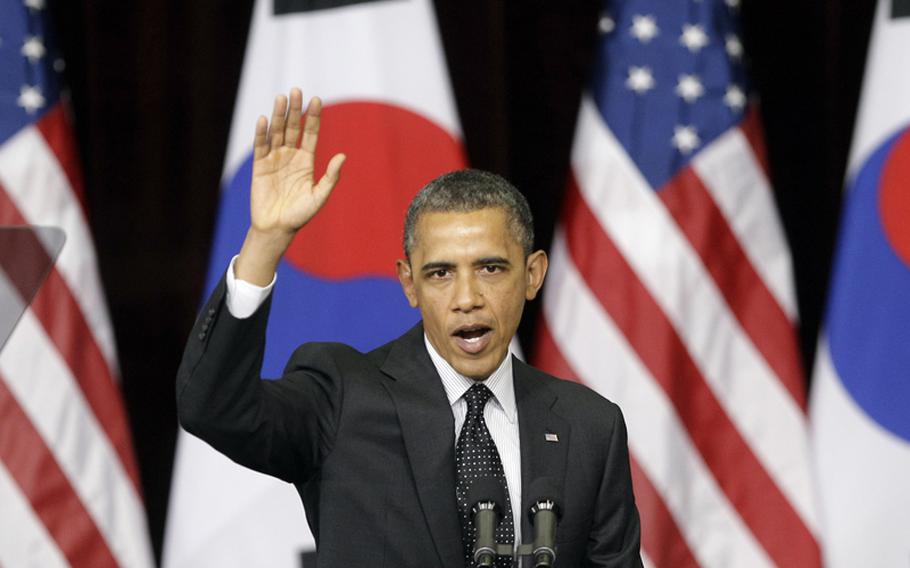 SEOUL &mdash; On the two-year anniversary of a deadly attack against a South Korean warship, U.S. President Barack Obama warned North Korea that &ldquo;there will be no rewards for provocations,&rdquo; and further aggression would lead to more isolation.

&ldquo;You can continue down the road you are on, but we know where that leads. It leads to more of the same,&rdquo; Obama said Monday morning during a speech at the Hankuk University of Foreign Studies.

&ldquo;By now it should be clear &mdash; your provocations and pursuit of nuclear weapons have not achieved the security you seek. They have undermined them,&rdquo; said the president, who is in Seoul to attend a two-day Nuclear Security Summit. &ldquo;Instead of the dignity you desire, you are more isolated.&rdquo;

Obama&rsquo;s speech came as North Korea has reportedly moved a rocket to a launch site in preparation for what the U.S. says is a long-range missile test. South Korea has warned it might shoot down any North Korean rocket that passes over the South&rsquo;s boundaries.

His visit also happens to co-incide with the end of the 100-day mourning period for North Korean leader Kim Jong Il, who died suddenly in December and was replaced by his son, Kim Jong Un, about whom little is known.

Before the latest moves by North Korea, tensions on the peninsula had appeared to be easing recently.

Exactly two years ago, the North launched a torpedo that sank the Cheonan and killed 46 sailors, and in November 2011, the North shelled the South&rsquo;s Yeonpyeong Island, killing four.

However, the international community was encouraged by the North&rsquo;s announcement earlier this year that it would put a temporary hold on its nuclear and missile testing, in addition to any uranium-enrichment, in exchange for food donations from the U.S. It also suggested it was open to a return to the so-called six-party talks aimed at stopping its nuclear weapons program.

Additionally, the North invited the U.S. to send in a team of investigators to resume the search for the remains of American soldiers killed during the Korean War, an operation that has been suspended since 2005. Plans for that search were canceled last week after North Korea&rsquo;s announcement of the planned rocket launch.

On Monday, Obama said he was sending the message &ldquo;directly to the leaders in Pyongyang&rdquo; that the U.S. was willing to take steps to improve relations, the same message he has offered another country thought to be developing nuclear weapon capabilities &mdash; Iran.

&ldquo;Time and again, Iran has refused, instead taking the path of denial, defeat and deception,&rdquo; he said, adding: &ldquo;There is time to solve this diplomatically, but time is short.&rdquo;

Obama, who visited the Demilitarized Zone on Sunday, declared that &ldquo;the danger of nuclear terrorism remains one of the greatest threats to global security,&rdquo; but touted progress made during his term in office in securing nuclear materials worldwide and reaching further international agreements to do so.

&ldquo;All told, thousands of pounds of nuclear material have been removed from vulnerable sites around the world,&rdquo; he said.

He said the death of Osama bin Laden and major blows against al-Qaida had made the world safer, but nuclear material was still being stored without adequate protections against terrorist organizations.

His administration is continuing a study that began last summer of the U.S. nuclear arsenal, which he characterized as a Cold War-era hangover that was too large and unsuited for modern needs.

&ldquo;I firmly believe we can ensure the security of the United States and our allies, he said, &ldquo;and still pursue further reduction in our nuclear arsenal.&rdquo;