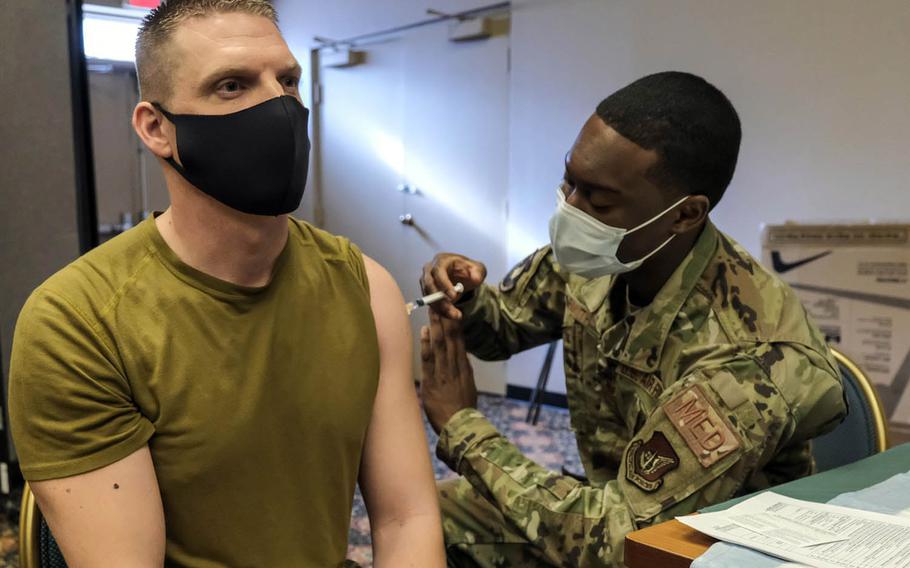 TOKYO – U.S. military bases in Japan and South Korea reported no new cases of the coronavirus as of 6 p.m. Friday.

Daily reports are not an accurate gauge of new infections. U.S. commands in both countries often clump several days’ worth of reports into one daily announcement.

But infection numbers are falling a year into the pandemic and nearly three months after vaccines arrived for U.S. troops in both countries. Not since Feb. 22 has any base in Japan failed to report at least one new coronavirus patient.

U.S. Forces Korea typically amasses into one announcement several weeks’ worth of cases among new arrivals to the country, the vast majority of new infections.

South Korea reported 463 people tested positive Thursday for COVID-19, the coronavirus respiratory disease, according to the Korea Disease Control and Prevention Agency. It has recorded between 350 and 470 cases over the past week.

Seoul accounted for 144 new patients. Gyeonggi province, the home of Camp Humphreys, the largest U.S. base in the country, and Osan Air Base, reported 153.

In Japan, the capital city reported 303 people tested positive Friday for the coronavirus, according to public broadcaster NHK. The seven-day moving average of daily new cases had increased to 297 over the past week, when it measured 273.6, according to metro government data.

Yokosuka Naval Base, 35 miles south of central Tokyo, on Friday announced it has one patient with COVID-19 under observation at the naval hospital there, according to a Facebook post.

Once a hotspot for the virus, the naval base as recently as January reported numbers of new patients rivaled only by summer outbreaks at Marine Corps bases on Okinawa.

In spring 2020, anyone assigned to Yokosuka lived for three months under tight restrictions as the virus swept their community. They were permitted to move only between their homes, workplaces and essential services like medical appointments and grocery shopping. At the time, the Pentagon directed U.S. installations to refrain from publicly reporting their coronavirus case numbers.

By October, reports of new cases dwindled to 11. In December another COVID-19 surge erupted, and the naval base reported 144 new patients, followed by 293 in January.

In February, a month after the two-shot Moderna vaccine arrived at U.S. bases in Japan, and along with admonitions from base commander Capt. Rich Jarrett, those numbers dropped to 49. So far in March, Yokosuka has reported eight patients with COVID-19, the coronavirus respiratory disease.