No damage at US bases after 7.4-magnitude quake sparks tsunami waves in Japan 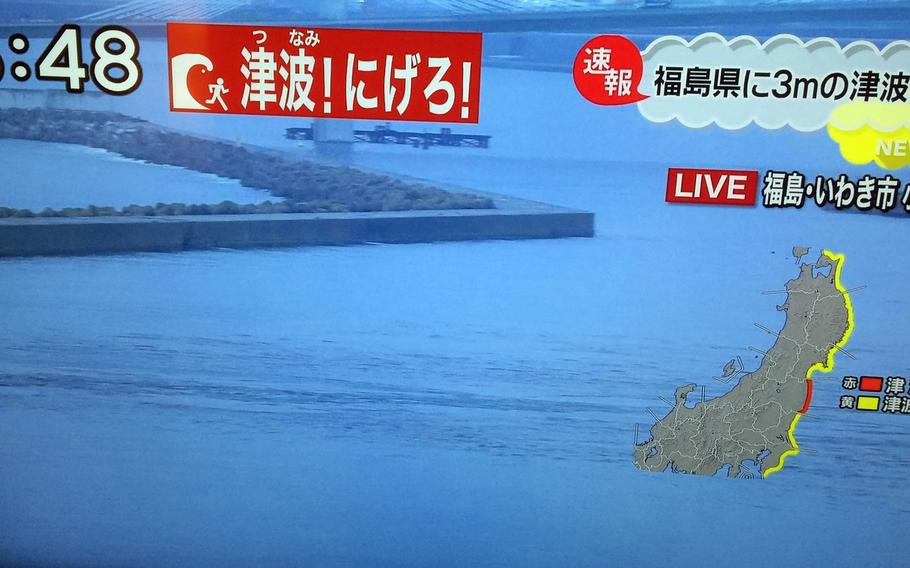 Water rushes out of a port at Onahama, in Fukushima Prefecture, before flowing back in again prior to a tsunami triggered by a preliminary 7.4-magnitude earthquake that struck Japan on Tuesday. (Erik Slavin/Stars and Stripes via NHK)

Water rushes out of a port at Onahama, in Fukushima Prefecture, before flowing back in again prior to a tsunami triggered by a preliminary 7.4-magnitude earthquake that struck Japan on Tuesday. (Erik Slavin/Stars and Stripes via NHK) 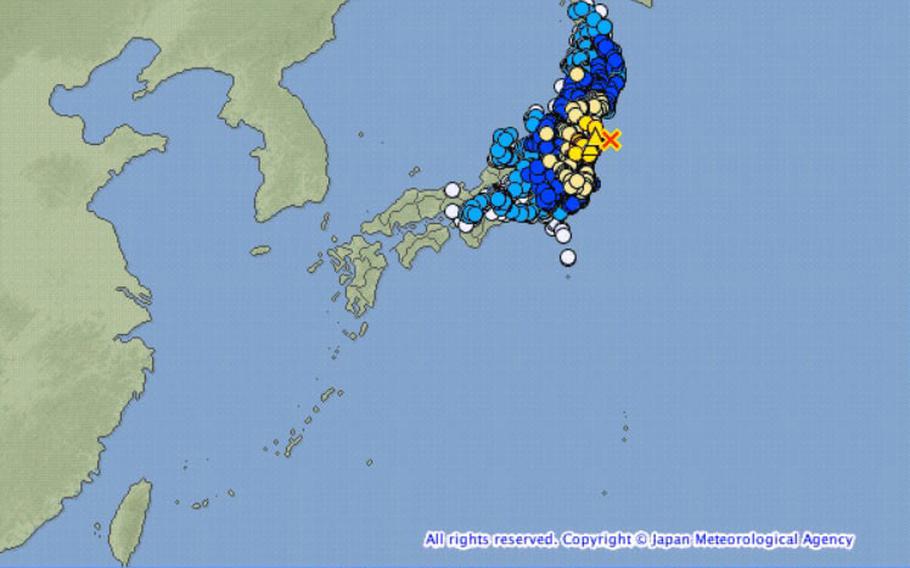 A Japan Meteorological Agency map shows how far the effects of a preliminary 7.4-magnitude earthquake were felt through the country. (Erik Slavin/Stars and Stripes via JMA )

The preliminary 7.4-magnitude earthquake struck off the coast of Fukushima Prefecture at 6 a.m., injuring at least a dozen people. Buildings swayed across Tokyo, 150 miles to the south.

Residents at U.S. military bases surrounding Tokyo also felt the shaking, but no damage or injuries had been reported by military officials Tuesday afternoon.

Multiple tsunami waves came ashore after the earthquake, with a 4.7-foot wave off Sendai the highest, according to Japanese national broadcaster NHK.

The Japan Meteorological Agency had warned of a potential tsunami in Fukushima and Miyagi prefectures rising as high as 10 feet, causing residents to evacuate coastal areas.

The Japan Meteorological Agency described Tuesday’s earthquakes as aftershocks of the 9.0-magnitude earthquake in 2011, which triggered a tsunami that led to meltdowns at the Fukushima Dai-ichi nuclear power plant.

The agency warned that another large earthquake could strike and urged residents to remain alert for about a week, according to The Associated Press.

At Misawa Air Base in the northeastern part of Honshu, residents living in apartment towers felt the quake. The 35th Operations Support Squadron issued an advisory for a potential tsunami of less than three feet, which was lifted hours later.

No tsunami warnings were issued in Tokyo and Kanagawa prefectures, home of most U.S. bases on the Japanese main islands.

Tokyo Electric Power Co. reported that a spent fuel pool’s cooling system at the Fukushima Daini nuclear power plant went offline for about 90 minutes after the earthquake. The temperature remained at about 84 degrees and presented no safety threat before being restarted, TEPCO officials said.

The Daini plant has remained offline since shortly after the 2011 disaster, though the national government and some local officials have advocated restarting more reactors despite opposition.

At least five reactors – all of which are of a different design than Fukushima Dai-ichi – have restarted under new safety standards, according to a Nikkei news report.