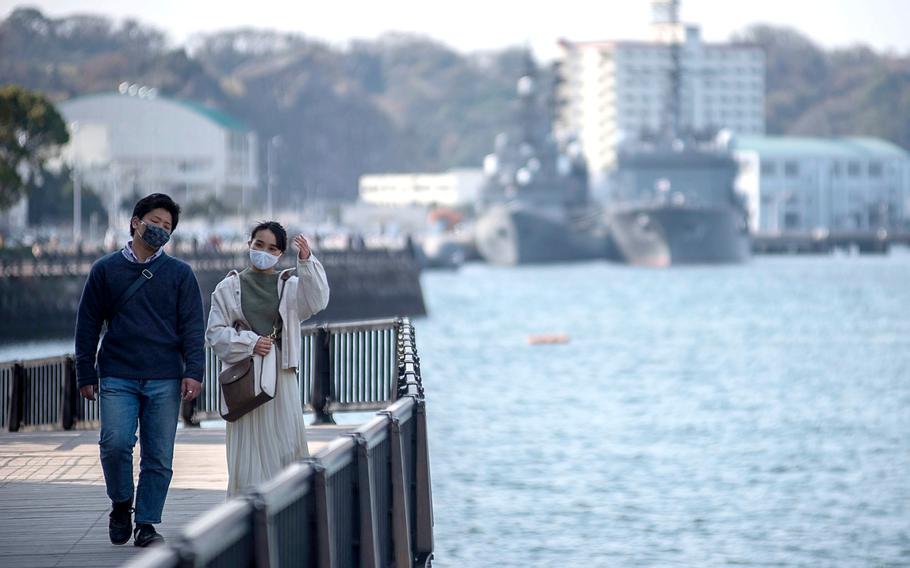 Buy Photo
Two people walking along the Yokosuka, Japan, waterfront wore masks as prevention against the coronvirus on March 19, 2021. (Akifumi Ishikawa/Stars and Stripes)

U.S. Army Japan, headquartered at Camp Zama, 26 miles southwest of central Tokyo, said seven of its people on Okinawa tested positive between March 24 and Wednesday, according to a Facebook post by the Army.

The Army said three individuals reported symptoms of COVID-19; the remaining four were already isolated as close contacts of a previously infected person.

U.S. Air Force and Marine Corps bases on Okinawa have reported an increase in cases of COVID-19, the coronavirus respiratory disease, since March 22. They have re-imposed a series of restrictions, including a ban on off-base dining, as a result.

Elsewhere, Marine Corps Air Station Iwakuni, 32 miles from Hiroshima, reported two people tested positive for COVID-19 while in quarantine following their arrival at the air station, according to a base Facebook post.

Tokyo reported 414 people newly infected with the coronavirus on Wednesday, the first day in nearly two weeks that the daily report did not exceed the new cases reported one week prior, according to public broadcaster NHK.

Several U.S. bases are located in or near Tokyo, including the headquarters for U.S. Forces Japan, the Air Force, Army and Navy.

Japan reported 1,561 new coronavirus patients on Tuesday, according to the World Health Organization.

In South Korea, the Korea Disease Control and Prevention Agency reported 506 new coronavirus patients Tuesday. The number of new cases has fluctuated between 300 and 500 in the country during March.

Seoul reported 156 new patients Tuesday and Gyeonggi province, where Camp Humphreys and Osan Air Base are located, reported 106, according to the agency.