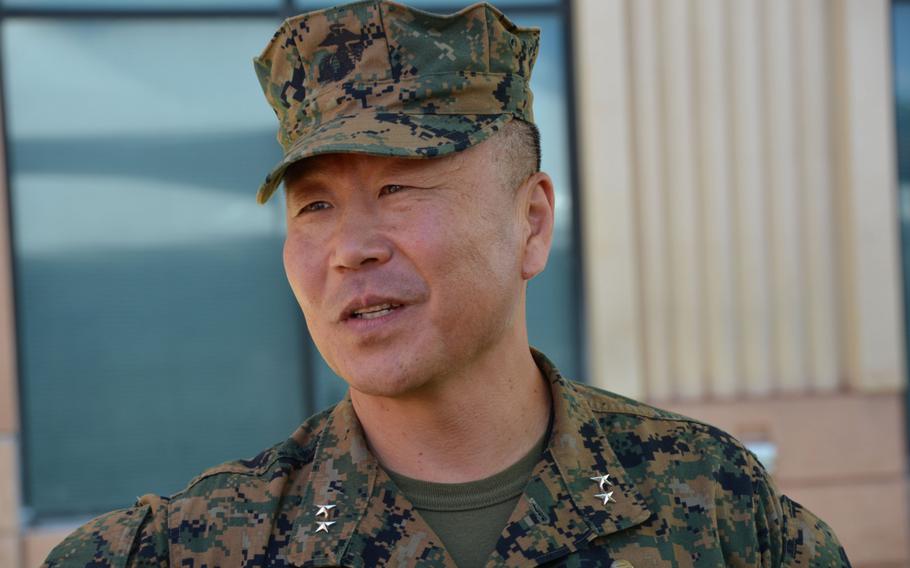 Gen. Raymond A. Thomas III, head of U.S. Special Operations Command, described Yoo as “the embodiment of the American dream.”

“Born on the Fourth of July, in Korea, he immigrated to this country at a young age and the rest, as they say, is history,” he said during a ceremony at Camp H.M. Smith, Hawaii.

Yoo is a career infantry officer who has led units from a rifle platoon to the entire 1st Marine Division. He previously served as director of operations for U.S. Special Operations Command at MacDill Air Force Base in Tampa.

Yoo replaces Maj. Gen. Bryan Fenton, who had assumed command of SOCPAC less than a year ago.

Fenton was scheduled to receive a third star after the ceremony and then become U.S. Pacific Command’s deputy commander. That position has been unfilled since Lt. Gen. Anthony Crutchfield left in February and retired.

PACOM commander Adm. Harry Harris told the audience it was significant that Fenton, as PACOM’s 32nd deputy, was the first one to come from the ranks of special operators.

“I think this point not only proves what kind of outstanding leader General Fenton is, but it also demonstrates the value that I place on the work by our SOCPAC warriors,” Harris said. “And considering our global fight against the scourge to humanity known as ISIS, I think the time is right for this historic appointment.”

The spread of jihadist terrorism in the Pacific theater, in particular fighters connected with the Islamic State organization in Iraq and Syria, is considered an emerging threat by PACOM officials and by some governments of Asian nations.

Joint Special Operations Task Force-Philippines was formed shortly after 9/11 to help the Philippine government with training and surveillance to defeat al-Qaida-linked groups in the southern part of the country.

That task force was deactivated in 2015, but Fenton said there are 2,000 special operators forward deployed in the Pacific in 17 locations.

Much of what SOCPAC does in the theater is classified.

Harris praised Fenton for making sure that SOCPAC’s operations directorate and logistics support facility in Singapore “have meaningful effects at the operational level.” He said Fenton’s command led to greater collaboration with other agencies during complex exercises involving responses to terrorism.