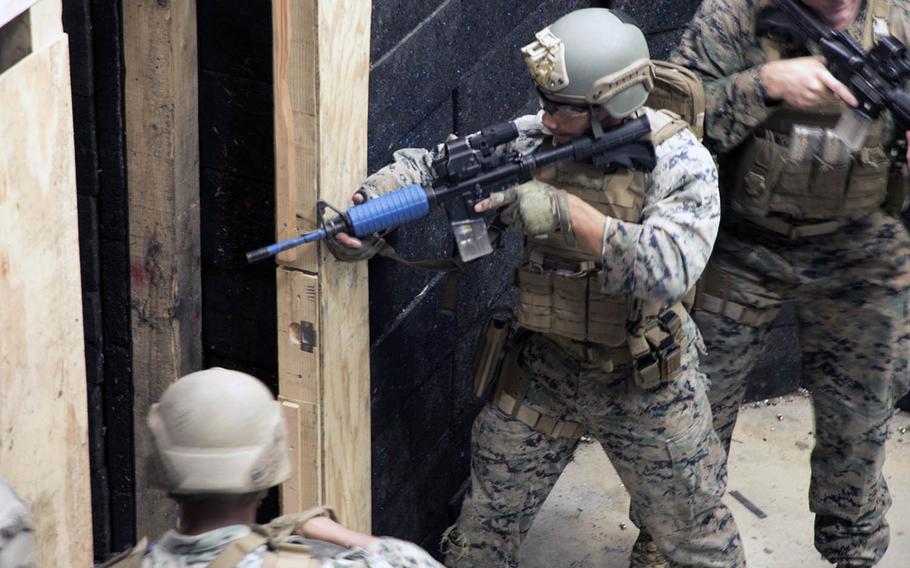 Marines of 3rd Reconnaissance Battalion prepare to enter a room in a Camp Hansen shoot house Thursday, Feb. 7, 2019, during a shoot-package exercise on Okinawa, Japan. (Matt Burke/Stars and Stripes)

Marines of 3rd Reconnaissance Battalion prepare to enter a room in a Camp Hansen shoot house Thursday, Feb. 7, 2019, during a shoot-package exercise on Okinawa, Japan. (Matt Burke/Stars and Stripes) 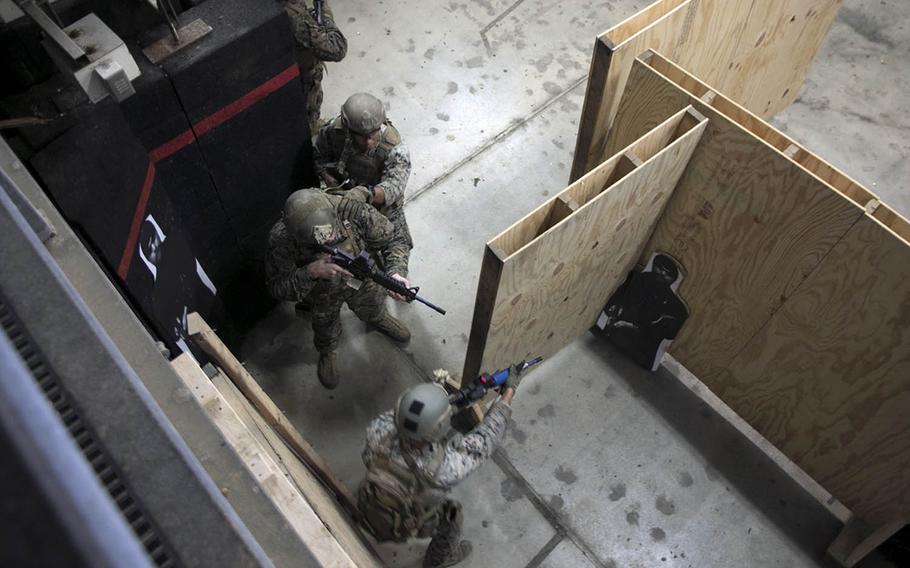 A Marine from 3rd Reconnaissance Battalion shoots a target in a Camp Hansen shoot house Thursday, Feb. 7, 2019, during training on Okinawa, Japan. (Matt Burke/Stars and Stripes) 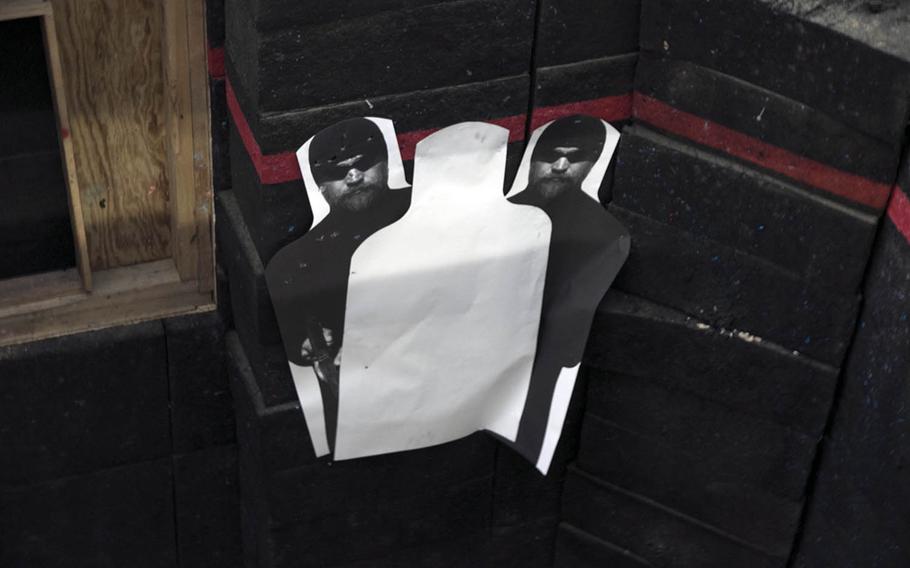 Two targets are posted behind a white silhouette that represents a hostage inside the Camp Hansen shoot house Thursday, Feb. 7, 2019, on Okinawa, Japan. (Matt Burke/Stars and Stripes) 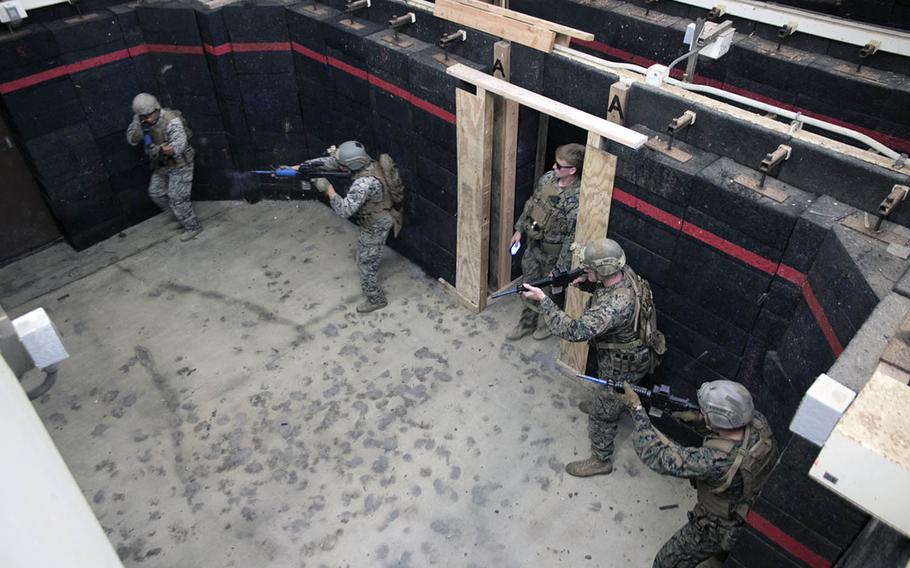 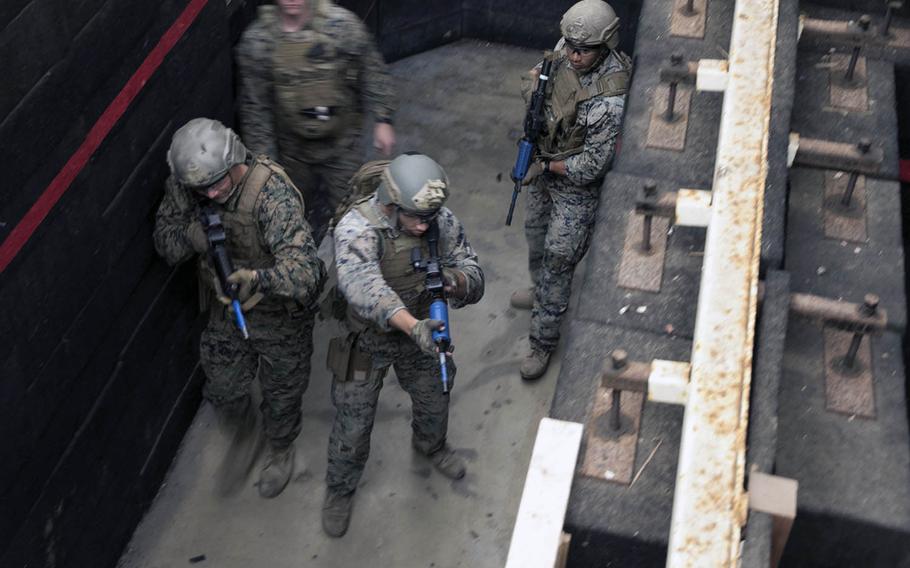 CAMP FOSTER, Okinawa — A team of four Marines moved methodically through the Camp Hansen shoot house, saying nothing, communicating instead by squeezing and tapping one another’s shoulders.

They entered a room swiftly and with precision, fanning out to cover every nook and cranny. Gunshots rang out; ejected brass flipped into the air and the smell of gunpowder hung over the chamber.

The Feb. 7 training was designed to get the newest batch of reconnaissance Marines ready for a close-quarters tactics course in October and an upcoming deployment at sea with the 31st Marine Expeditionary Unit and the Navy’s Task Force 76. As part of the MEU, the Marines will serve as the United States’ preeminent quick reaction force in the Indo-Pacific region.

When the smoke cleared, the Marines from 3rd Reconnaissance Battalion, 3rd Marine Division learned a valuable lesson, one their leaders hope they will take with them to sea.

“Who shot the one on the right?” asked a senior recon Marine from a catwalk above the action. “You see a gun on him?”

The senior Marine shook his head in disapproval. He instructed the Marines to shout out a demand to see the potential target’s hands. Then they were sent outside to do it all over again.

Combat is fluid and decisions must be made in a split second, the Marines of Force Company, 2nd Platoon, said afterward. The constant repetitions in the shoot house were designed to commit the motions of close-quarters room clearing to muscle memory, build unit cohesion, get new unit members up to scratch and to focus on advances in house clearing techniques gleaned from decade of wars waged in the Middle East and Afghanistan.

Shoot-house exercises are part of a broader firearms training called a “shoot package” that includes live-fire barricade drills in which Marines must shoot targets between small opening in walls. Second Platoon is undergoing that training to prepare for an upcoming deployment at sea, in which its mission will be VBSS – visit, board, search and seizure – of possibly hostile vessels.

Lance Cpl. Shane Waldo, 21, from Scottsdale, Ariz., a recon Marine just over a year, is one of the more experienced Marines in the unit. He was one of the only Marines to have already gone through a “shoot package” prior to recently joining 2nd Platoon.

The platoon is picking up new Marines, so it is currently in flux, going to sniper, free-fall and dive schools in order to be ready to ship out.

“This shooting package was probably one of the first, like, biggest things they’ve went through, other than, like, SERE,” Waldo said, referring to survival, evasion, resistance and escape training.

“They haven’t been through a shooting package yet so that’s just reps,” he said. “You gotta just keep doing it. They gotta get reps in and they’re going to become proficient at clearing houses and eventually pushing to ship, doing VBSS.”

VBSS essentially means going room by room, “plying off doors, calling out threats, not shooting non-threats,” on their way to accomplishing their objectives, Waldo said.

“We would be the maritime raid force, so we would be on ship either coming in from a boat or dropped in on a helicopter and this would be, like, exactly what we’d be doing on ship,” he said.

“To get to that level you have to run through houses, learn all the basics, kind of like what we’re going through with these guys today.”

The shoot house training started outside with dry runs, in which two Marines cleared the outline of a room drawn in the dirt. Then they progressed to four-man entries. They moved inside and followed the same protocol.

Once two- and four-man teams had completed their dry runs, paint rounds were added.

They went through repetition after repetition. Each time, unit their leaders changed the landscape by moving around barricades and targets, obscuring weapons and adding hostages.

“That didn’t look bad,” a senior Marine said after one of the final runs.

“Houses are very similar to ships with the entry procedures, room-clearing procedures, so going through the houses like this helps prepare us for later down in our deployment cycle when we’ll actually get on the ships and go do our VBSS training,” said Staff Sgt. Samuel Mills, who was running the day’s drills.

“It builds unit cohesion and it just gives them that baseline to start from, so they’re not going into that [close-quarters tactics] package with absolutely no knowledge. They’ve at least got a starting point and a basic understanding of how things are going to work.”

Mills said tactics have evolved slightly in recent years, from fast and hard entries into houses in Iraq and Afghanistan to a more deliberate style of entry.

“Instead of kicking in the doors and charging into the room, we kind of step back and try to stay out of the room as much as possible, clear it slowly before entering in and then enter in with most of the room already clear before we have to actually put guys inside,” he said. “It’s a much more methodical way of doing it and it’s thought to be more efficient.”