New coronavirus infections hover above 1,500 in Tokyo; US military in Japan reports 13 cases 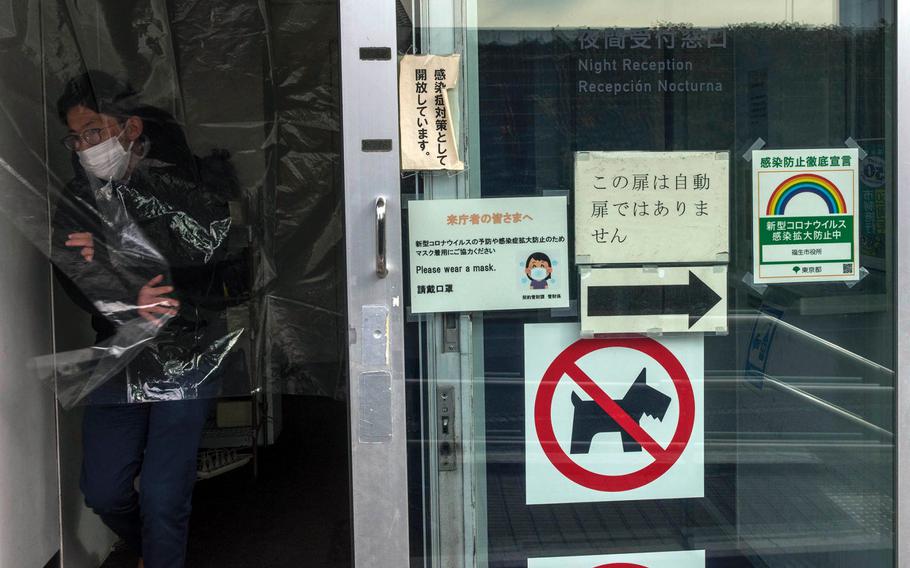 Buy Photo
A shopper wears a mask to guard against the coronavirus while leaving a store in Fussa, Japan, Jan. 5, 2020. (Theron Godbold/Stars and Stripes)

TOKYO — Japan’s capital city counted more than 1,400 new coronavirus cases for a second consecutive day, while the U.S. military listed 13 across the country as of 6 p.m. Thursday.

The Tokyo Metropolitan Government reported 1,502 new infections Thursday, according to public broadcaster NHK. One week prior, the city marked its highest one-day total, 2,447. With the new cases Thursday, the city passed 80,000 pandemic infections.

Marine Corps Air Station Iwakuni, 26 miles southwest of Hiroshima, on Thursday reported via Facebook that five people had tested positive over the previous day. None of the newly infected were in quarantine when they contracted the virus.

At the Marine Corps’ Camp McTureous on Okinawa, Bechtel Elementary School had one person test positive, according to a message Wednesday from Principal Gordon LynCook to school staff and families. The school remained open Thursday and no classes are scheduled Friday due to a teacher workday.

Classes resume there Tuesday. An unspecified number of teachers will remain home and provide virtual instruction after having contact with the infected person, LynCook wrote in a Facebook post Thursday. Substitutes will be present in those classrooms, he wrote.

The Marines reported seven new patients Thursday at four bases on Okinawa: three at Camp Kinser, two at Camp Schwab and one each at Camps Hansen and Courtney.

At Yokota Air Base, the headquarters in western Tokyo of U.S. Forces Japan, the base commander on Thursday banned dining inside off-base restaurants in the Chiba, Kanagawa, Tokyo, Saitama, Osaka, Kyoto, Hyogo, Aichi, Gifu, Tochigi and Fukuoka prefectures from 8 p.m.-5 a.m. until Feb. 7. Takeout and delivery of food is still permitted.

Those prefectures are under a state of emergency declared by the government of Japan.

Commanders elsewhere, including Misawa Air Base and the Army’s Camp Zama, have imposed the same prohibition in their areas.

One Defense Department civilian employee and four contractors at Yongsan have quarantined at their homes off-base since Jan. 8 after they had contact with another infected person, according to a USFK news release. The sixth person is the spouse of an affected contractor and quarantined on Saturday.

The seventh is a Defense Department employee with no direct connection to the other six. He last visited Yongsan on Jan. 7. He fell ill with symptoms of COVID-19, the coronavirus respiratory disease, and sought treatment, according to USFK.

USFK between Jan. 7 and Tuesday reported another seven civilians at Yongsan had tested positive for the virus.