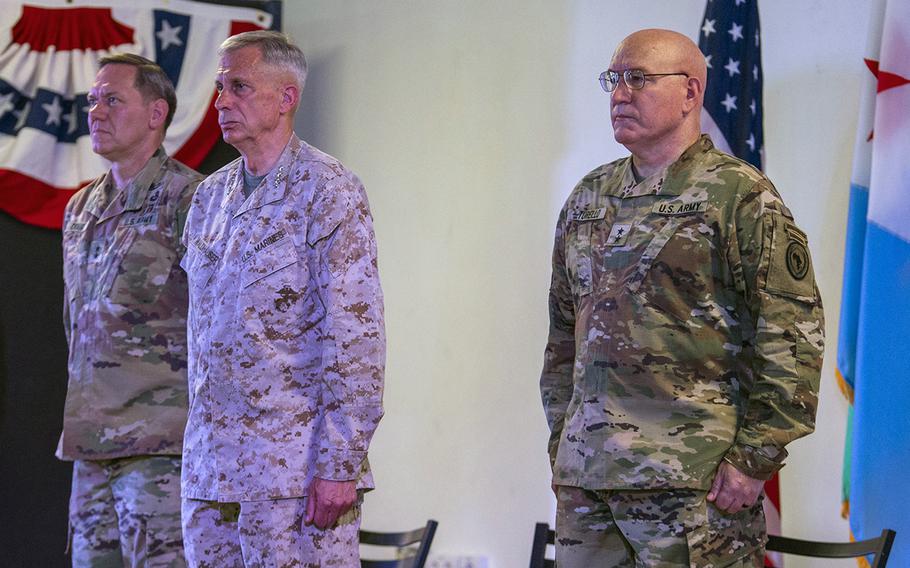 CAMP LEMONNIER, Djibouti — Army Maj. Gen. Michael D. Turello assumed command of U.S. military efforts in East Africa, where a proposal may shift the mission focus from multinational training and counterterrorism to a permanent presence that seeks to strengthen American influence on the continent.

“I am confident in Mike’s genuine leadership and his ability to take care of our service members and civilians to ensure they are successful,” U.S. Africa Command’s Gen. Thomas D. Waldhauser said during the change of command ceremony at Camp Lemonnier in Djibouti, the U.S. military’s main operational hub in Africa.

His new role puts him in charge of an organization that officials say could soon see changes to its mission.

The proposed transition of the command to Joint Task Force-Africa has yet to be cleared by the Pentagon, AFRICOM said in a statement on Thursday. Officials declined to discuss details of the proposal, including its budget and resources.

The mission in the Horn of Africa began in 2002 as part of the U.S. response to the 9/11 attacks. Though its focus has shifted over the years, one of its primary missions has been helping to battle al-Shabab, an al-Qaida aligned terrorist group in Somalia that has been vying for control of that country for more than a decade.

Making the task force permanent would expand its area of operations beyond a 2.4-million-square-mile chunk of East Africa comprised of 12 countries, CJTF-HOA officials told Stars and Stripes.

While it would still help combat violent extremists in the region, the proposed permanent mission’s main focus would be to maintain partnerships with African countries — competing with China and Russia for influence — and to protect U.S. interests, such as embassies. China established a support base in Djibouti, about four miles from the base where CJTF-HOA is located, in 2017.

In 2014, the U.S. secured a 10-year lease at Lemonnier with an option to extend for another 20 years, ensuring a U.S. presence in the region for decades to come.

The base houses about 4,500 U.S. troops and contractors and employs more than 1,100 Djiboutians. A bilateral agreement grants the U.S. military access to port facilities and the Djiboutian capital’s small airport.

During the change of command, both Waldhauser and Turello praised outgoing commander Craig.

“I would serve with you in any battle, at any time and in any place,” said Turello, who began his career as a Marine officer. “You are a credit to our nation.”

Waldhauser hailed Craig’s “unwavering dedication” to the mission, including in Somalia, where some 500 U.S. troops are supporting efforts to defeat al-Shabab, and for shepherding the command’s response to Cyclone Idai in March.

More than 120 C-130 sorties delivered more than 850 tons of relief supplies to Mozambique after the southeast African nation was raked by the storm, one of the worst ever in the southern hemisphere.

In his last address to the command, Craig thanked his leadership team, units and staff, and noted several accomplishments, including the construction of a women’s medical clinic in Ali Oune, Djibouti.

“Every day brings its challenges and I have witnessed firsthand your ability to rise to each one that is thrown your way,” Craig said. “You’ve all provided me with great support; what I ask is that you provide that to Maj. Gen. Turello as well.”