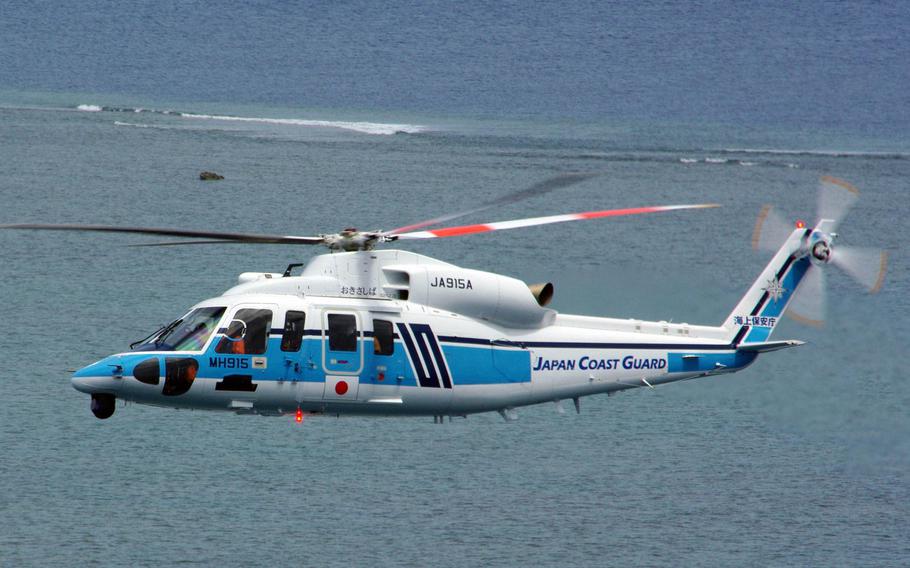 A Japan Coast Guard MH-915 helicopter, like this one in an undated photo, took part in a two-day search for a missing U.S. Navy civilian employee starting Dec. 15, 2020. (Japan Coast Guard)

CAMP FOSTER, Okinawa — The Naval Criminal Investigative Service is involved in the search for a Navy civilian employee on Okinawa who went missing last week from a seaside tourist spot.

Japanese police believe the man, an American in his 30s, likely fell from the cliff at Cape Zanpa and drowned in the sea, a Kadena police station spokesman said Tuesday. No suspicious charges have appeared on the man’s credit cards, the spokesman said.

The Navy declined to identify the man or he worked; Japanese authorities said he is in Japan under the status of forces agreement that governs U.S. personnel affiliated with the U.S. military.

He went missing from the site on the island’s west coast sometime before 6:20 p.m. Dec. 15, when the Japan Coast Guard was called, a coast guard spokesman said last week.

The missing man’s car was found in the parking lot and a fishing pole and backpack were discovered atop one of Zanpa’s towering cliffs, the spokesman said.

Kadena police and Nirai emergency responders searched the area where the man went missing, which is marked by jagged, seaside cliffs, walking trails and a 100-foot-tall lighthouse, the police spokesman said previously. The Japan Coast Guard searched by air and sea, their spokesman said.

The coast guard called off its search Dec. 17, a Navy spokesman said Tuesday.

However, the Naval Criminal Investigative Service is still on the case. The Navy cited the active investigation and the “circumstances of the disappearance” in declining to name the man.

“Each member of our team is important to us, and we remain hopeful our missing team member will be found,” Navy spokesman Rob Helton wrote Tuesday in an email to Stars and Stripes. “We are not able to provide further information at this time.”