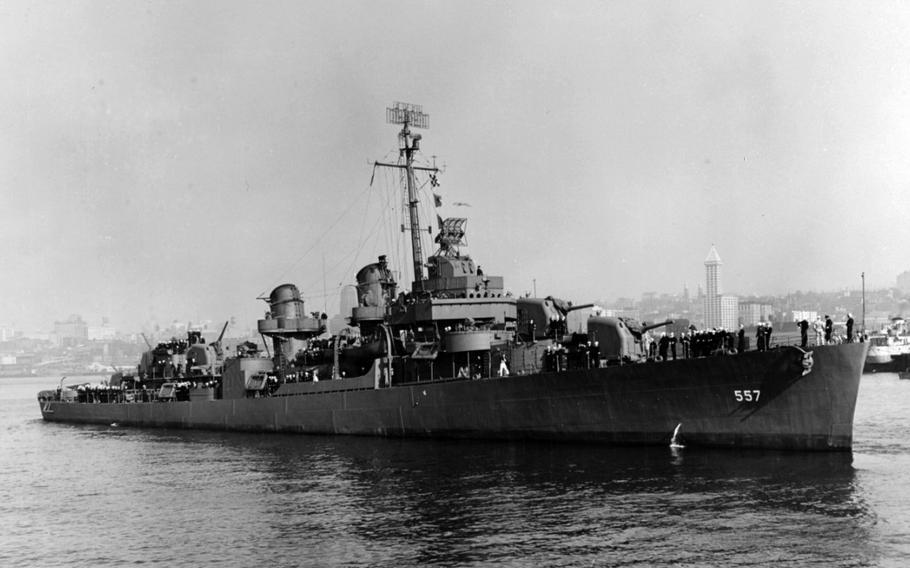 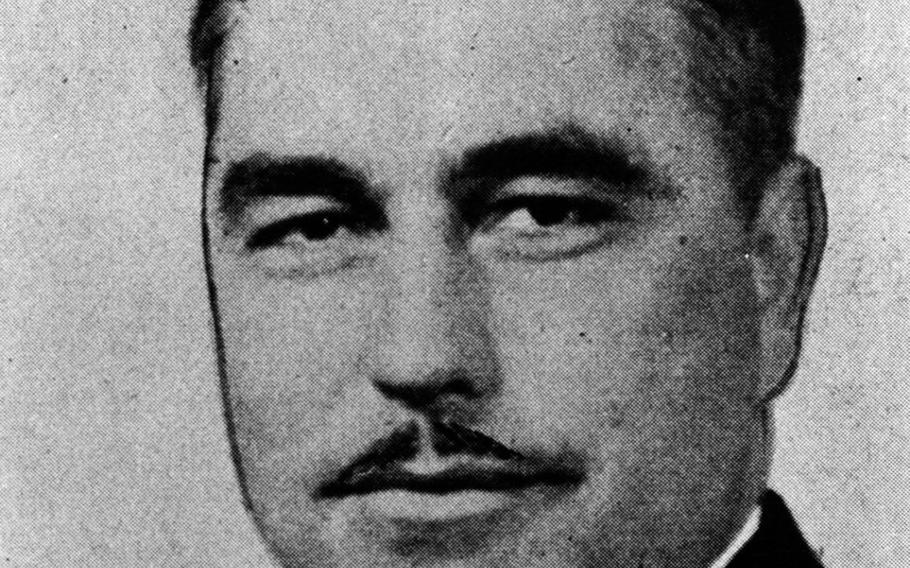 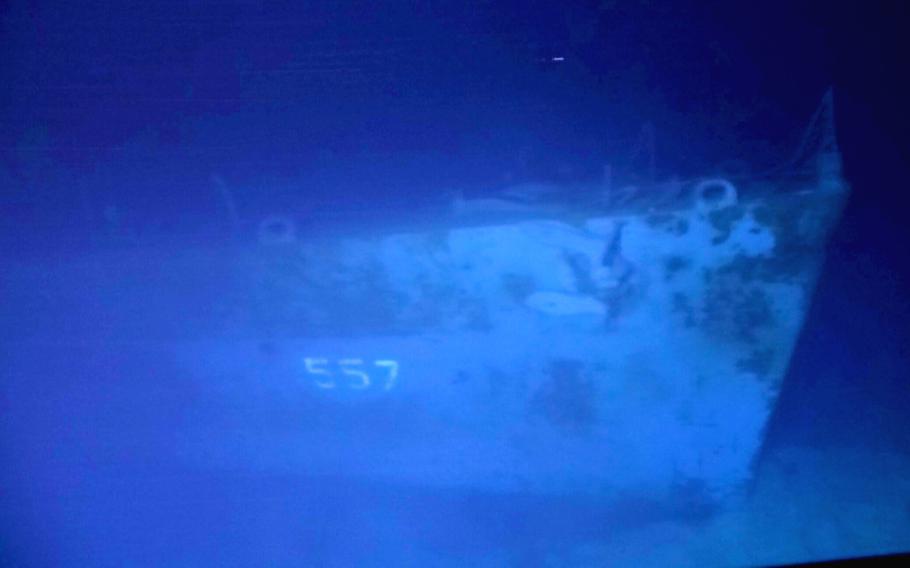 The hull number 557 on the USS Johnston is visible four miles below the surface of the Philippine Sea in a photo taken by divers in March 2021. (Caladan Oceanic ) 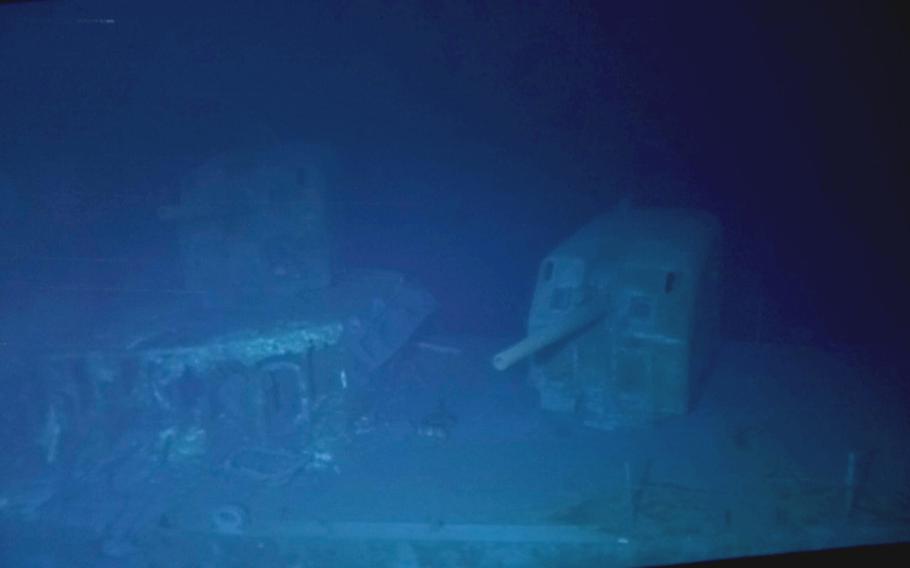 Searchers have located and filmed a World War II destroyer lying four miles deep in waters off the Philippines, the deepest known shipwreck in the world.

An expedition by undersea technology company Caladan Oceanic found the wreck of the Fletcher-class destroyer USS Johnston this week below 21,180 feet of water east of Samar Island in the Philippine Sea, the firm said in a news release Wednesday.

A previous expedition had located debris believed to belong to the Johnston or a virtually identical destroyer that sank in the same battle, but the main wreckage lay down a cliff in waters too deep for the submersible to go.

The Johnston sank on Oct. 25, 1944, during the Battle off Samar, which was the central scene of action in the Battle of Leyte Gulf, one of the biggest naval battles ever fought.

Led by Cmdr. Ernest Evans, a Native American from Oklahoma, the Johnston was supporting the landing force attempting to liberate the Philippines from the Imperial Japanese. Evans was among the 186 sailors to perish out of the crew of 327.

Two former U.S. Navy officers funded and carried out the expedition to film the wreck.

Retired Navy Cmdr. Victor Vescovo funded the search and personally piloted Limiting Factor, a deep submergence vehicle, to the wreck site during two separate eight-hour dives, the company said. The vehicle has no operating depth limitation, does not require a surface tether and can hold two occupants.

The pair of dives “constituted the deepest wreck dives, manned or unmanned, in history,” the company said.

The company did not disclose the exact date of the dives and did not respond to a query by Stars and Stripes.

One image posted on the company’s web site clearly shows the ship’s hull number, 557, in a largely intact portion of the vessel.

“The image is impressive, and we look forward to seeing the rest of the data collected during the expedition because the story of the Fletcher-class destroyer USS Johnston (DD 557) and her crew is a perfect example for modern Sailors of the honor, courage, commitment, and valor of their predecessors from the Greatest Generation,” Sam Cox, a retired rear admiral who now directs the Naval History and Heritage Command, said in a news release Thursday.

Petrel discoveryThe crew of the Petrel, a research vessel owned by the late Microsoft founder Paul Allen, discovered a debris field believed to be associated with the ship in 2019.

They filmed pieces of a destroyer strewn across a higher seabed using a remotely controlled submersible.

That vehicle, however, could not dive deeper than 20,000 feet, below which rested the majority of the Johnston, including the forward two-thirds of the bow and the bridge that were found this week, the company said.

No human remains were observed, and nothing was taken from the wreck, the company said.

“We need to take great care to make sure that the ship remains completely undisturbed, and I believe that can be very effectively done in manned craft, especially as the depth here precludes most remotely operated vehicles,” Stephenson said in the news release.

“We could see the extent of the wreckage and the severe damage inflicted during the intense battle on the surface. It took fire from the largest warship ever constructed — the Imperial Japanese Navy battleship Yamato — and ferociously fought back.”

Guts and gallantryOne naval historian has written that the U.S. Navy has never shown “more gallantry, guts and gumption than in the two morning hours between 0730 and 0930 off Samar.”

A Japanese decoy fleet had lured the ships of 3rd Fleet away from the area, leaving a small group of 7th Fleet ships behind: three destroyers and four destroyer escorts.

At dawn Oct. 25, the small fleet faced the much larger Japanese force of four battleships, six heavy cruisers, two light cruisers and 11 destroyers, according to an account by the Naval History and Heritage Command.

“Heavily outmatched, Evans gave the order to attack a major portion of the Japanese fleet,” the account said. “Although Johnston had hit a heavy cruiser which was forced to retire, enemy shells managed to strike Johnston causing widespread damage and casualties. Evans himself was seriously wounded. Despite the grave damage, no torpedoes remaining, and reduced speed and firepower, Johnston commenced a second attack firing 30 rounds into a 30,000-ton Japanese battleship.”

At one point, Evans ordered the ship to draw fire away from the escort carrier USS Gambier Bay.

“After two-and-a-half hours, Johnston — dead in the water — was surrounded by enemy ships,” the account said. “At 9:45 a.m., Evans gave the order to abandon ship.”

The ship rolled over and sank 25 minutes later.

The badly wounded Evans never made it to safety, but how he died after ordering the ship to be abandoned is not known.

He was awarded a posthumous Medal of Honor, the first Native American in the U.S. Navy and one of only two destroyer captains in World War II so honored, the Naval History and Heritage Command said.