An EA-18G Growler launches while sailors taxi another Growler to an adjacent catapult on the USS John C. Stennis flight deck on June 5, 2016, in the South China Sea. (Jake Greenberg/U.S. Navy)

An EA-18G Growler launches while sailors taxi another Growler to an adjacent catapult on the USS John C. Stennis flight deck on June 5, 2016, in the South China Sea. (Jake Greenberg/U.S. Navy) 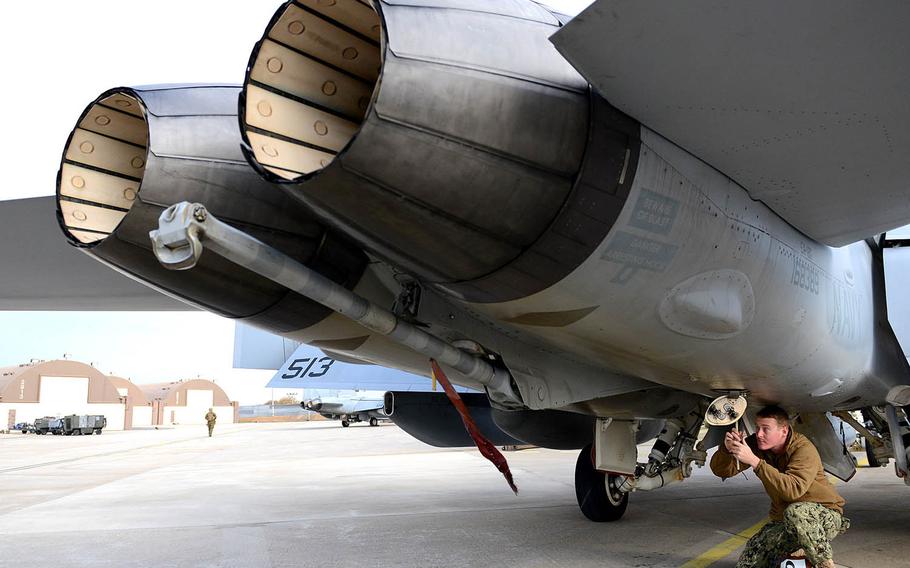 YOKOSUKA NAVAL BASE, Japan — Four Navy E/A-18G Growler aircraft and 120 personnel arrived at Clark Air Base on Wednesday to help the Philippines patrol its sea borders amid heightened tensions over territorial rights in the South China Sea.

The detachment will train Philippine military pilots and “support routine operations that assure access to the air and maritime domains in accordance with international law,” a 7th Fleet statement said Thursday.

The VAQ-138 expeditionary squadron detachment from Whidbey Island, Wash., is at least the second temporary group to assist the Philippines since Pacific Command approved a new U.S. air contingent program in April.

The assistance comes amid concerns that China’s artificial island-building in the South China Sea will target Scarborough Shoal, which lies about 140 miles west of the main Philippine island of Luzon. The shoal is little more than a few rocks jutting out of the water at high tide but is claimed by both the Philippines and China.

“I think we see some surface ship activity and those sorts of things, survey type of activity, going on. That’s an area of concern ... a next possible area of reclamation,” Chief of Naval Operations Adm. John Richardson told Reuters in March.

Beijing has dumped more than 3,000 tons of dirt on top of submerged reefs in the South China Sea to build radar stations, military-grade runways and other enhancements, according to Pentagon reports and commercially available satellite photos.

Chinese officials have also mulled imposing an Air Defense Identification Zone over international waters in the South China Sea, a move opposed by the U.S. and several nations in the region.

U.S. officials have discussed helping the Philippines build a “credible minimum deterrent” to defend and monitor its borders. Long focused on internal security, the Philippines needs more ships and aircraft to watch over the waters surrounding its many islands, according to regional security analysts.

In January, the Philippine Supreme Court signed off on the Enhanced Defense Cooperation Agreement, which will allow the U.S. to send troops on extended rotations to Philippine bases. The agreement does not allow the U.S. to control its own bases on Philippine soil, as it did with Clark Air Base and Naval Base Subic Bay until the early 1990s.